Budapest Quiet - Except for Music

The past week in Budapest has been tense since the riots that broke out in the city on the anniversary of the Hungarian Revolution on October 15th. One of the more recent developements was a closed session of Parliament in which evidence was presented that alleges former PM Orban Viktor's party, FIDESZ, was involved in the planning and execution of the disturbances (well duhhh... what a surprise,) in conjunction with some of the rather more distatsteful organizations of Hungary's radical right wing. We are talking some major fascistoid hate groups here - surfing around some of the Hungarian language rightist web sites provides a bellyful of antisemitic skinhead (link to a somwhat outdated ADL report from the mid 90's) and neo-nazi sentiment. I'd add more links as examples, but the level of extreme verbal hatred and vindictive nastiness is so strident and petulant that this blog would probably be backtracked by the groups memtioned, and I'd rather not have to deal with them at all. It seems that the Hungarian National Security Agency read FIDESZ the riot act - literally - and suddenly they behaved themselves like a nice little "citizen's party" should. In spite of the warnings of blocades and riots, Saturday is the day I usually head to the Bosznyak tér market for shopping... and the day starts with a nice, hot véres hurka, a blood and rice sausage... 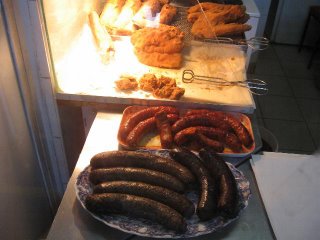 Hungarians take their sausage very seriously, and yes, it is considered the perfect breakfast food to start a day of browsing among the cabbages and late season zucchinis in the market. A bit heavy, yes, but then you are simply not peckish for the next 72 hours... and there are only pork sausages available. No duck and herb, no veal, no beef, only pork and paprika... or pork with even more paprika. No garlic, pepper, herbs, or any other flavorings allowed. Truth is, they do get a bit boring after a while. One day I'll post photos of us making sausages at home - I am simply unable to live in a place with no Italian sausages. So I make them myself. 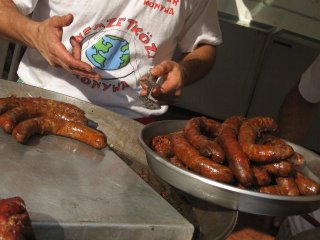 What is interesting about Hungarian national holidays is that on these days most resident foreigners stay indoors and do not go out for the day. A sad comment on life in Hungary, but true. Finally I was going stir crazy, mad with cabin fever - so I went to the Álmassy tér Dance House on Thursday... Puma was playing kontra with the Matokabinde Band as usual. 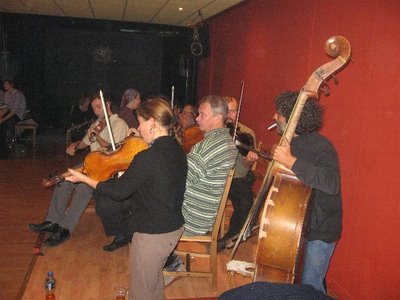 A great set of Mezöseg tunes from Palatka at the end of the evening. Sally from Australia was on second kontra fiddle - she may well be the world's best female kontra player, and she certainly is the only one that has ever played with the Palatka band itself. 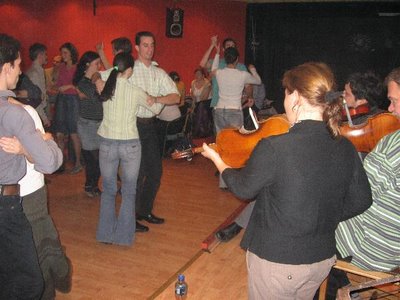 Somos was in the big hall playing for Moldavian Csángo dancing. Somos' regular dance house at Márczibányi tér was closed this season for reconstruction, and Szabolcs tells me everybody is much happier at Álmassy tér - it's more central in downtown Pest, and there is no entrance fee. 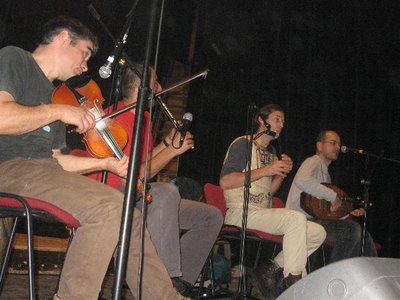 Last night was a big treat - the Tecsö Band was at the Fonó in Buda. They are Gypsy musicians from the Hutsul region of Karpato-Ukraine, from the village of Tjaciv (Tetch, in yiddish) just across the Tisza river from Maramures in Romania, and near the border of Hungary. The band consists of the Csernovics brothers - Joska on accordion, Yura on drum, and Mishka on small tsymbaly (cimbalom) with Ivan Popovics on fiddle. They are one of the last real traditional bands to maintain any active Jewish repetoire (alongtside the Ruthenian, Hungarian, and Romanian tunes that are their bread and butter) and they played with me as guests when I recorded our new CD last spring. 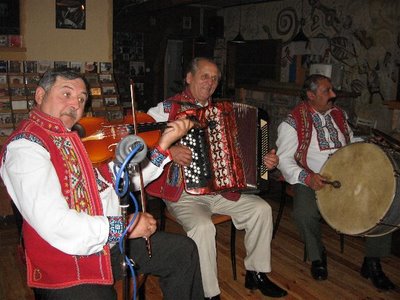 Mishka, the cimbalom player wasn't with them on this trip due to illness, but I sat in for some tunes, and Adam Good - who was playing the Fonó that evening with the amazingly tasteful Nikitov - sat in on bass. That's Yura in the foreground with the drum - he is probably the most accomplished master of Carpathian drumming alive today. Yura actually went to Romania to buy the drum belonging to the Petreus Brothers' band when Ion Petreus died. That's a two day trip. He also plays plonka - a strip of film held in the mouth which produces a sound somewhat between a screaming miniture clarinet and somebody pinching the air out of a small balloon. CD with samples here. 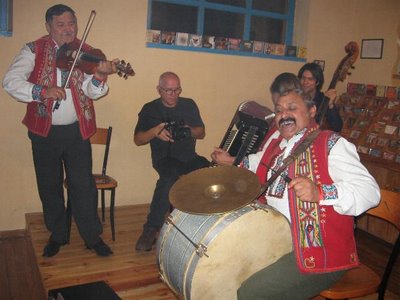 ah, so that was plonka! we were wondering what was that inhuman sound... see you soon!

Yes, Budapest will not be without music, ever! Thanks for your post! These kind of places are the ones that you can't really find anywhere else.

But if you want to have some good Hungarian sausage, you were looking at the wrong place: of course, there IS pepper, garlic and other stuff in it, not only paprika...