Shake the Hand that Shook the Hand

Last week I saw that a Blues Festival was happening in Budapest at the Almássy Tér Culture Center. Normally, the Hungarian blues scene is a bit embarrassing - due to a tragic mistranslation in the 1970s, "blues" here usually means the Rolling Stones ("The Rollings") or at best, Eric Clapton. There are exceptions - there is a pretty active Chicago blues cult started by the alumni of the old Palermo Boogie Gang, and the country blues scene that was spearheaded by Gál "Boogie" Csaba and Dr. Walter's Bluesbreakers. Luckily, those two groups helped program the festival, and so when I saw that Dave "Honeyboy" Edwards was headlining the Friday night show, I had to take my son, Aron... 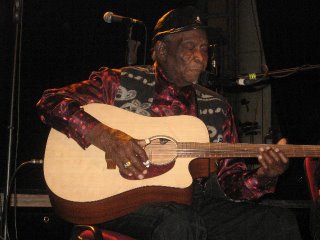 Honeyboy Edwards is, at 91 years old, essentially the last living representative of the pre-WWII Mississippi Delta blues scene. Edwards is credited with the original compostition of the classic "Sweet Home, Chicago." He was born in the same year as Robert Johnson and Muddy Waters, and in fact Honeyboy was with 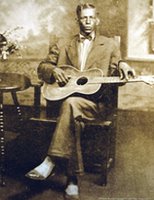 Robert Johnson on the night that Johnson drank the poisoned whiskey that killed him. Honeyboy learned a lot of what he knows from being around now legendary musicians like Charlie Patton, Son House, and Tommy Johnson. Since Aron has been listening to blues music all his life (he got the collected works of Robert Johnson for his tenth birthday, along with a bottleneck slide) I figured this might be his only chance to hear somebody from that older generation in person. When I was a kid learning guitar, I was lucky that people like the Rev. Gary Davis, Pink Anderson, and Brownie McGee were still making the rounds of folk festivals and clubs - they had a big influence on my guitar teachers and on me - I still mainly play in Piedmont style, rather than Delta. I once met the blues fiddler Howard "Louie Bluie" 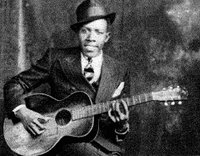 Armstrong and yes, at the age of 86 he could still speak Hungarian (Armstrong was raised in a West Virginia mining town among Polish and Hungarian kids. He could also speak Chinese...) When I was Aron's age I went to hear the Preservation Hall Jazz Band play at Lincoln Center, and went backstage to meet the musicians. They were pretty astounded to meet a kid at this show, and one very ancient gentleman offered me my very first sip of beer - Tom Robinson, who had played trombone in Buddy Bolden's Band and in the Eagle Band in New Orleans in the 1890s. Now, I've hung with some amazing musicians in my life - Fela Kuti, Lester Bowie, Dave Tarras, Bill Monroe, Dewey Balfa, Junior Murvin, Itzhak Perlman, to name a few - but getting your first beer from a member of Buddy Bolden's band is the kind of mojo that stamps you for life. You got to shake the hand that shook the hand... And Aron has been pretty serious learning guitar this last year, so we both had to go. This would be Aron's Mojo Bar Mitzvah... 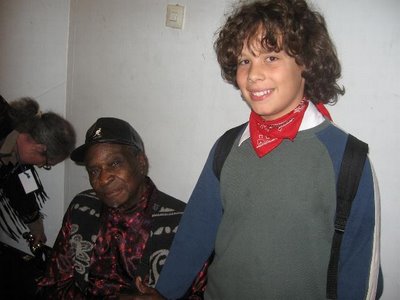 I thought we would just pop in and be gone, but no. Honeyboy likes to talk. You put a 13 year old next to a 91 year old, and they talk... and talk... and talk.... Mr. Edwards is a real gentleman and a charmer. He reminisced about his father, a fiddler "Yeah, man he would push the bow... they would play songs like Corinna, they would dance them stomps...." and how he fared when he was on tour in Japan "They eat that fish, you know, like raw fish, I don't eat none of that. And all that chinee food - I don't eat no chinee food. So what we did, you see, we found us a store. They had hot dogs, they had bread, they had onions, we took that back to the hotel. They had a kitchen in the room, and we just cooked that and ate real good for three week, cause I don't eat none of that chinee food...." Boogie was also backstage, and had his guitar autographed by Honeyboy (he plays the same model Johnson Resonator as me...) 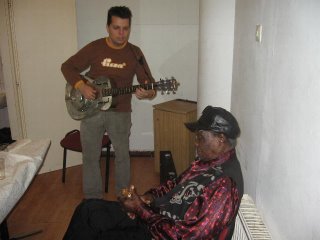 Gál "Boogie" Csaba has been playing traditional country blues guitar since way back - I met him in 1990 at the old Tilos az A, and played on one of his CDs with Dr. Walter's band. A couple of years ago, in what may be the most subversive use of Hungarian television in country blues history, Boogie entered the incredibly tacky Megasztar reality TV competition... and became one of the finalists. Overnight, people who never heard real blues were scarfing up his CDs - hardcore country blues all of them... Every time they aired the talent show concerts he's pull out his metal resonator guitar and blast out some incredible take on Kokomo Arold or Furry Lewis. It was wonderfully absurd. So Aron was pretty tickled to find out that the reality TV show star is another of Papa's old buddies. Wait til they hear about this at school! 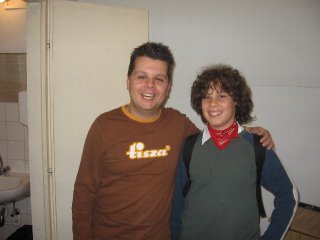 Hi there!
I really like your blog, especially the posts about Romania because I lived there for 5 years and it brings back so many good memories. I've put a link to you on my blog so I can return often.
Have a great day!
Kim