Perhaps my favorite corner of Romania is the northern Transylvanian region of Maramures. Located next to the Ukraine, Maramures was not heavily industrialized during the communist era simply because Ceaucescu felt that if the Soviets ever invaded Romania, they would probably nick Maramures and he wasn't letting them have any of his beloved cement factories. As it is today, Maramures is still an overwhelmingly rural, peasant culture, and the local culture is surprisingly resiliant compared to peasant cultures in many other parts of Romania. [Photos by Fumie Suzuki] [did I mention that these photos were taken by Fumie Suzuki?] 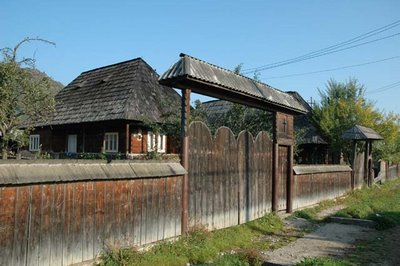 Maramures used to be home to one of the most concentrated Jewish populations in east Europe, and - as a territory held directly by the Hapsburg Treasury - the Jews here held rights, such as the right to own farmland, that were unique in East Europe. The Jews here were mainly farming Jews, strictly Hasidic orthodox but living in a healthy coexistence with their Romanian, Hungarian, and Hutsul (Ukrainian Catholic Ruthene) neighbors. Today there are about 75 older Jews, mostly living in the main town, Sighet. I go to Maramures a couple of times a year to hear and collect music in the local fiddle style, especially from older fiddlers who still remember the repetoire of the Jewish instrumental music. There used to be a lot more such fiddlers but these days it isn't that easy to find somebody who played for Jewish weddings - there haven't been many since the 1960s. in fact, it was my band that played at the last Jewish wedding in Sighet in 2001. I don't usually call this "klezmer" music, because Maramures Jewish music lacks a lot of the rythyms and scales we associate with the Moldavian/New York Jewish music we generally call klezmer. The Jewish music up here was much more Hasidic in nature, and nobody ever touched a clarinet. It was fiddle music, and the style of playing was closer to the local rural Romanian/Transylvanian string band style than to the semi-classical and Turkish-influenced Jewish fiddle styles that became associated with Galician and Moldavian Klezmer. 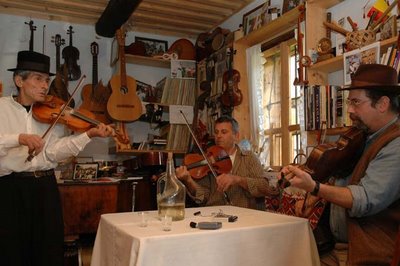 Above are Gheorghe lui Grigore Covaci "Ionnu" and Ion Pop playing fiddle at Pop's home in Hoteni. Ionnu is one of the few remaining Gypsy fiddlers who remembers any of the Jewish repetoire first hand. (They both worked with British ethnomusicologist Lucy Castle when she lived in Romania, with Ion eventually going on to form Popeluc with Lucy. Lucy has published a new book about Maramures Music called Not the Maramures Tunebook available on her web site) I'll go more in depth about Maramures Jewish music in a future post, but one cultural thread linked all the nationalities of Maramures - they love fiddle music, and they love to drink plum brandy. The local home brewed plum brandy, known as Tsuica in Romanian and Pálinka in Hungarian, but the good stuff, twice distilled and always well over 50% pure alcohol, and absolutely pure plum brandy is called horinca. Inspiring stuff. Named my blog after it. 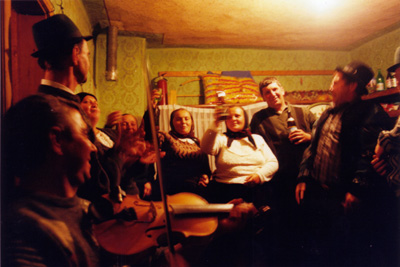 Plum brandy starts out with... err... plums. The plums are placed into barrels, usually made of blue plastic, and covered to sit for a few weeks to ferment. Quite honestly, you don't want to peek inside the barrels at this time. Not only does the fermentation produce alcohol, it produces fruit flies and their wormy little larvae. No matter, it all goes into the still. I think the worms are part of the saveur... a fine larval aftertaste that I think is something Scottish single malts and many Cognacs lack. 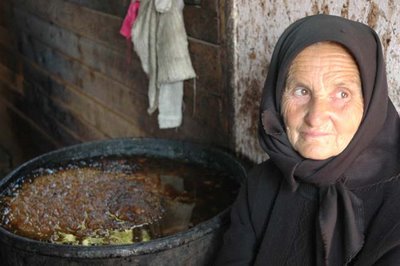 The plum mash gets distilled through a still into huge vats of tsuica, which gets a second distillation to become horinca. This still was in the village of Rozavlea. A liter of horinca was about 5 Euro, sold in various plastic soda pop bottles. If it is in an old fanta bottle, it has to be good. Good horinca is like fine quality vodka - so pure that even after drinking vast Maramures-like quantities of it one can wake up in the morning without any hangover, ready to hitch the horse to a plow and do a few acres of ploughing or sheep castrating after, of course, the obligatory shot of horinca with breakfast. 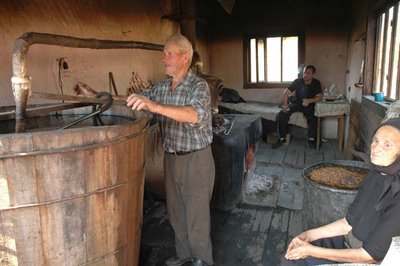 The cuisne of Maramures is simple and seasonal - people eat meat when they kill animals, which is around Christmas time and again around Easter when they cull the lambs. At other times of the year the villagers are virtually vegetarians who eat large amounts of cheese. On weekends everybody cooks up huge batches of sarmale - stuffed cabbage filled with rice, onions and root vegtables. There are no butcher shops in the villages - if an animal is killed, somebody heads into the center of the village and yells that there is meat for sale. The shops do not stock anything except nasty salami and frozen chicken, which nobody buys since everybody has dozens of chickens in their yard already.

Maramures has a well developed agrotourism infrastucture. I usually call ahead direct to the home owner when I book a room, and your host will usually feed you. In the village of Ieud, however, we always stay with Nitsa Dancus. Nitsa is an amazing woman, the source of much Maramures folkore and music, and a great cook. Well, she is if if you like the traditional meal of a black iron kettle of mamaliga cu brinza (corn meal porridge with sheep cheese) and a bottle of horinca. 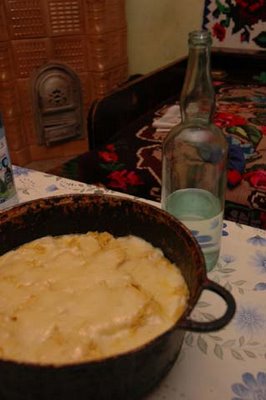 Mamaliga is like polenta, but with balls. A coarser ground of corn meal than Italian polenta, more flavor, and the cheese is usally very rich with sheep fat, which cook out during the baking process. People eat this day in, day out for their whole lives in Maramures, and they are still stronger than almost any group of people I've ever seen. With a bottle of pure full strength horinca... the Maramures Happy Meal!
Next: The Jewish Dwarf Theater of Maramures.

Hey ho, Bobbo! Your entreaties have not been in vain. I have written you! But you've yet to write back, o fickle one! Are you in NY, pigging out at Katz's? How about Yona Shimmel, they still there, I wonder?

Haven't heard from Fumie... did you pass my info along to her?

OK, listen, drop a line, lemme know if you got my mail, let's get back in touch, it'll be fun.

Your blog is most interesting and entertaining (I would've expected no less). And you've linked to a couple of music/MP3 blogs I didn't know about yet, so thanks for that, too!

HI, love your post, I know the area but I'd like to know where these jewish people are living and I'd be interesested also in some other information about hosting. Could you please drop a line? Thanks and congrats for the nice post.