Getting back to Budapest was not the easiest part of my journey. I flew out of Newark on Alitalia, and arrived in Rome at 7 am on Saturday morning with two hours to nose around before connecting to my flight to Budapest. Fumie had flown separately, so her flight was via Lufthansa connecting in Frankfurt. I figured I would grab a chunk of cheese at the duty free, hop on the plane, and be home. Of course, things don’t work like that. 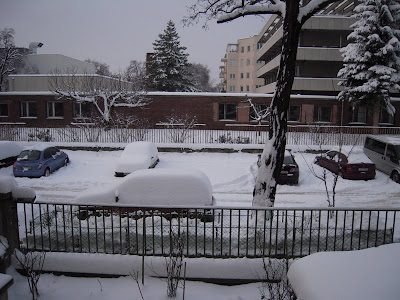 Budapest was snowed in with two feet of snow falling the night before and more coming down, and the airport was closed, all flights cancelled. So my day flowed by waiting for another flight, running down to the luggage carousel to collect my bags, rebooking a new flight outside in the public arrivals area, checking in my bags, and going through the security process again… and again… and again throughout the day. The Alitalia staff was helpful in their slightly confused, monolingual way. The representatives of Malev? Non-existent on the ground, they made themselves manifest as telephoned refusals to provide meals for the stranded passengers milling around the terminal. They didn’t have the decency to call the gates to tell the airport personall when a flight was cancelled or delayed. 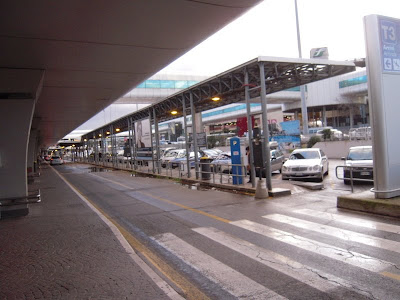 The Alitalia staff simply shrugged and said “Well, you know… it’s Malev… they never pay” as if anybody who didn’t already know about Malev must have been on some other planet for the last century. Malev… isn’t that short for 'malevolent?' Should any company that ran out of money years ago still be allowed to operate? A company that even Russian oil millionaires seem wary of taking over? Fumie called from Frankfurt, where she was delayed: Lufthansa had issued all passengers a ten Euro meal voucher. As anybody who has flown anywhere via Germany knows, there really is no food in German airports – except wurst. Frankfurters or Bratwurst, not much else, and never very good. Poor Fumie. In Rome, at least, we had wonderful coffee bars and Panini galore… I broke down and ordered a pizza combo. 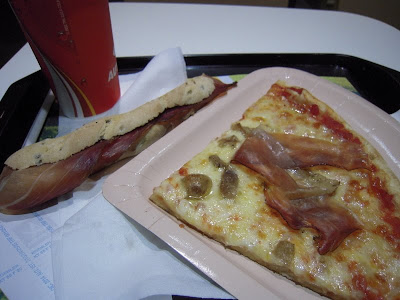 At Fumicino, the pizza isn’t spectacular, but it did come with real wild porcini mushroom. And I got an Alpine sandwich with speck bacon in the bargain. Not shabby at all. Eventually, after being rebooked three times through the day, our final chance of catching a final five pm flight fell through. With no idea of what to do, and expecting to sleep curled up in a corner of the baggage claim area, I went to the Alitalia ticket counter to rebook my flight yet again and was told that Alitalia would be sending me to a hotel to spend the night. Since my flight had been booked through Alitalia I was lucky: those passengers who booked through Malev were only offered a room at a special airline refugee rate. I hauled my bags to the overnight baggage guard room and hopped on the shuttle bus. So at the very least I get to see some of Rome… 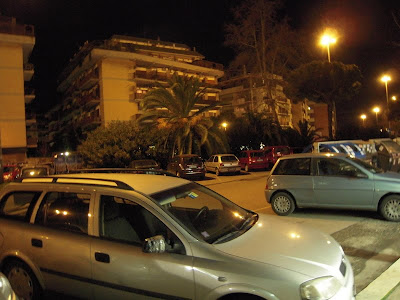 or at least Ostia, the beachside suburb near the airport (although it actually is a part of the municipality of Rome.) I was in a good mood when I arrived… Here is the view from my balcony: 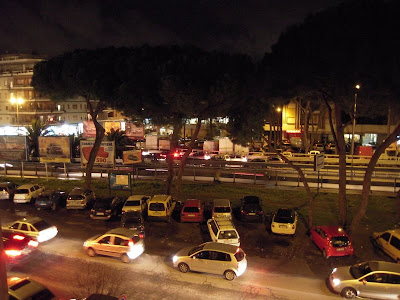 While Budapest sat under two feet of snow, I had palm trees and balmy spring mediterranean weather. I had dinner and went for a walk. The food at the Hotel Satellite was buffet style and quite possibly the worst I have ever eaten in Italy, but then that alone made it special and, after all, it was free. My favorite thing to do in Italy, however, is visit the supermarkets and I had just enough time to run down the street to a “Simply” market. Having run through the security checks so many times, I had a good idea of what I could and couldn’t bring and what to expect, and since I was already passed into the European Union, I could go hog wild, which is what I did. 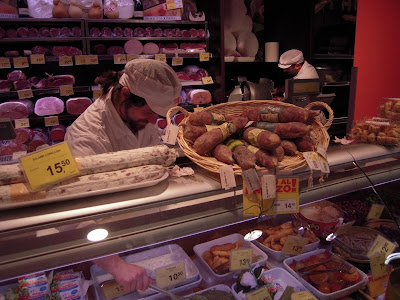 Italian supermarkets seem like the happiest places on earth. I grabbed a zampone – a smoked pig leg stuffed with cotechino sausage, usually served at New Years with lentils and now on sale – and asked the deli staff how to cook it. They could speak English, surprisingly unlike the airport staff, and soon I had four butchers all trying to find the best way to prepare pig leg. 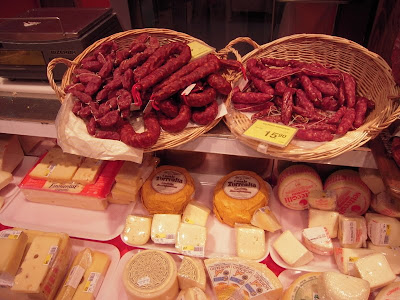 I grabbed a few cheeses that were half the price of the ones on sale at duty free. I popped in a few jars of anchovies and a couple of salamis. I would have picked up more but there is a limit to how much even I can carry alone… So now I am back... still busy for the next week with writing... but I already miss my folks back in the USA... and can't wait to visit them again. 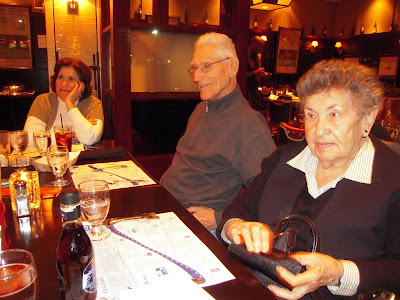 >... there really is no food in German airports – except wurst. Frankfurters or Bratwurst, not much else, and never very good.<
Sorry Bob, that is utter nonsense (as anybody who *really* has been will know). There's a McD, a Burgerking, a Turkish Kebab place, more than a dozen restaurants by my last count of varying price ranges, a Sushi bar (Fumie must've missed that one) plus various (coffee) bars and a well-stocked supermarket. Whether the food is any good is debatable and certainly coffee will have been better at Fiumincino, but then that goes for most any airport. The Wurst stuff is just prejudice rehashed.

Just in case you get stranded in FRA again, take a print-out of this http://www.frankfurt-airport.de/cms/default/rubrik/24/24405.restaurants-1both~1.html