Backstage with the Musicians 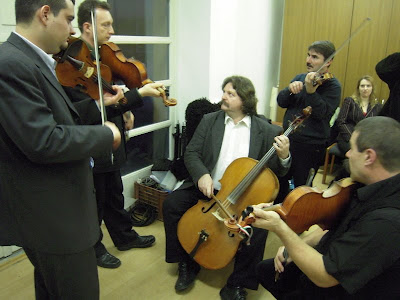 Tommorow we travel to Solingen, Germany for a concert. People often have romantic notions about a musician's life - the truth is most of what we do is travel. Getting to the gig is what occupies our time - standing on stage doing what we do well is hardly a problem. I have no problem playing century old Moldavian Jewish violin pieces on stage in front of hundreds of people. It is what I do. Getting to the stage is the problem. So tomorrow we fly on GermanWings airlines - a cheaper alternative to renting a mini bus and driving eighteen hours. Except that we can't take our violins on board as hand luggage unless they are in soft cases. Who the heck carries a violin in a soft case? OK... we get to airport, take violins out and carry them in moldavian bags on board, stick our cases into a duffel bag and hope for the best. This is why it pays to work with cheap violins. In Germany we are playing with Jake Shulmen-Ment, one of the best Klezmer violinists. He can never travel on German wings - his violin is worth about... enough to buy a car. Mine can buy a pair of sneakers on sale. My violin, however, is louder and has yikhes. Speaking of fiddlers, we played a gig in Budapest last weekend at the Fono club. 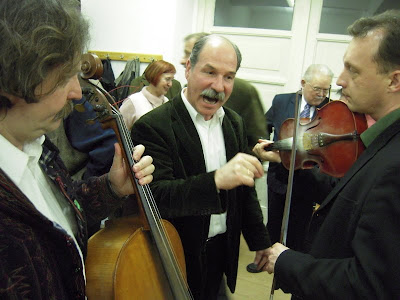 It was a concert of some of the Hungarian folk bands who were at the center of the Dance House movement in the late eighties and nineties - Téka, Őkrős, Béla Halmos and Ferenc Sebő, singer András Berecz, and others - to add some "where are they now?" footage for a DVD series derived from the old Hungarian TV folk music program. With musicians, the concert is not the actual exciting part of these events - it is hanging around backstage with your friends that defines a good experience. This was the best: a while back Texas bassist and all around mensch Mark Rubin talked about how the hang is central to a musician's experience. For Hungarian music, this was a hang to end all hangs. First of all, the backstage jamming is what a musician wants to hear - the stuff on stage is always too polite and... rehearsed. And onstage you never get to hear the interesting bits - like Ferenc Sebő, who with Béla Halmos kick started the whole trad music movement in Hungary in the 1970s - diddling around with french hurdy gurdy melodies. 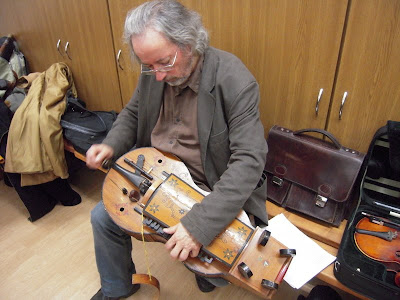 And typically for Hungarian gigs, there was virtually nothing to eat, so we know enough to bring our own. OK... they had pogacsa, dry bread biscuits... but bad backstage food is usually enough to make any musician blow his stack abroad... but not here. We are used to it. Flute playing genius Róbi Kerényi pulled out a sack of bacon, onions, and bread and quickly became quite popular with the crowd. Yes, this really is what Hungarian males like to eat - hunks of sliced, raw bacon with onions. 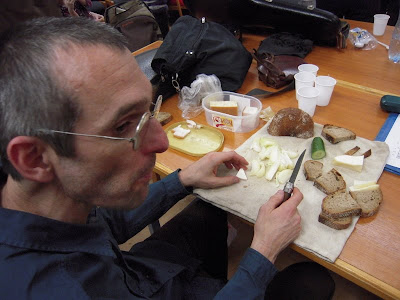 I have never seen Róbi eat any other meal in the twenty years I have known him. He is a serious bacon connosieur. And a monster flute player. Since the participants in the concert were from bands that had been fluidly interchanging members for thirty years, it was a chance for some of the guys from Di Nayes to play Transylvanian music with their old buddies from former bands. 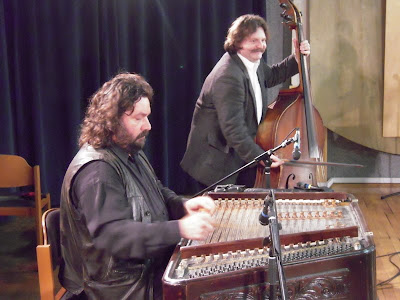 Feri got to show off his cimbalom chops playing some Bonchida material with Pali from Táka. And since I don't actually go to formal concerts as much as I used to - in the Dance House scene we always got the best music sitting around a table at the bar during dances - I haven't been seeing a lot of my old buddy András Berecz. András is one of the last of the generation to have learned his singing from older village singers - outside of Transylvania you don't find many young men singing in the old style. And he's loud. Loud but exquisitely controlled, as you can see in the videos I posted of backstage rehearsing and jamming during the break.
That last slow tune has a special significance to me. It comes from Ördöngösfüzes, a village in the northern plains region of Transylvania. When I first bought a boxed three LP set entitled "Hungarian Folk Music" in 1972, there was a recording of the village band playing this piece. It was my first experience of the slow, majestic, powerful screaming fiddle music characteristic of Transylvanian folk bands. So what am I doing here in Hungary? Still chasing after this sound. This one.
Posted by dumneazu at 9:47 AM

Gee, that's just around the corner from where I live. So you actually come all the way from Budapest on grotty Germanwings to play the one concert plus the workshop on Sunday? They must pay you a princely sum ;-)

A recording of the show will be broadcast, as my googling showed, on March 4 20h, on German station WDR3. They do have a livestream. The website is at http://www.wdr3.de/. You can access the stream from there or directly at http://www.wdr.de/wdrlive/media/wdr3-wm32.asx.