I experienced a bit of a shock the other day when I was trolling about on Youtube looking for videos of some older fiddlers from Transylvania. I found my old friend and fiddle mentor Berki Árus Ferenc or “Árus Feri” from the village of Méra (west of Cluj/Kolozsvar) playing a familiar looking violin. Then it suddenly hit me: that's my fiddle he’s playing!Yes, that is the violin I now own and do most of my playing on. So how did it end up pixilated on the internet? It's not just a little coincidence, because it is being played by the man who was one of my life's best friends, the man who mentored me through years of learning to play Transylvanian fiddle, taught me the Romani language, accompanied me on trips to visit old Gypsy violinists who still played Jewish fiddle repetoire, who took me into his family and who once loudly introduced me to a bar full of Transylvanian Gypsies “I want you to meet my son – my Jewish Gypsy son from America!” Feri's father had played for the Jews around Cluj before the war, and Feri knew that these were the tunes I was seeking out to record, so he took it on himself to ask around among the older generation of Transylvanian band leaders on my behalf, and we used to go from village to village recording tunes - including several old Jewish ones - from fiddlers well into their 80s. Also, his wife was part Jewish, according to her WWII era identity papers, and when the Jews were taken from Méra in 1944, somewhow this one girl was hidden by the Gypsies in a hollowed out haystack. Feri used to bring her food and drink: after the war they were married, and they raised a large family of proper Romani speaking Protestant Hungarian musician Gypsies. 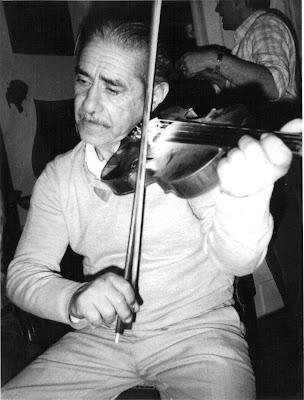 I’m not sure Árus Feri ever actually owned this violin – I knew him to play a couple of cracked, cheap, old brown fiddles. But about five years after Feri had died, I met a Gypsy instrument dealer in the Cluj flea market who had a few violins for sale. I wound up buying two – the one in the video, and another which I gave to Árus Feri’s talented fuck-up of a grandson who had sold his own violin. The violin seller, it turned out, was the brother in-law of Feri’s brother Béla, the accordion player of Méra. In the Romani world, everybody is related, so it isn't that mysterious that I wind up playing on his fiddle [photo by Stephen Spinder.] 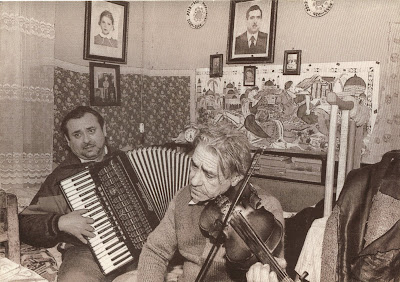 Somehow, perhaps on a visit to Cluj, Árus was filmed playing on this fiddle which would someday end up sold to me. Fate works in funny ways. Like most Transylvanian Gypsy fiddlers, Árus Feri usually played on a variety of crap fiddles, but the older fiddles were prized mainly for their volume – these are cheap but loud instruments that had to be heard acoustically above a crowd of dancing, singing peasants in a village bar or marching around outdoors through the muddy village streets for processions (be patient - the music starts about half a minute in.)Árus Feri was one of the most influential musicians in my life. He taught me how to be a musician, not just a fiddle player. He would watch me play - I usually looked at my fingers when learning a new tune - and tell me "Don't play from your fingers! Play from your heart!" He taught me the inner world of Romanes – the world inside the boundaries of the Romani language. The son of the legendary fiddler from Méra, “Old Árus” who died in 1977, Feri was an extraordinary dancer who was studied by the nascent Hungarian folk music scene for his slick moves during the legényes, or lad’s dance. Indeed, there is a photograph of him dancing with his wife Rózsinéni in the 1972 National Geographic book “Gypsies: Wanderers of the World”. That picture planted the seed that eventually led me to Méra and a lifetime of screaming Gypsy violin. For a lot of Hungarian folk musicians, Árus is probably remembered more as a dancer than as a fiddler. In any case, Árus Feri was a dancer the likes of which you don't often see these days.After the fall of Ceaucescu, when Romanians could travel freely, Feri used to stay with me in Budapest quite often. He was a wonderfully pre-modern visitor. I remember him showing up unannounced one night, so I served him a quick meal of eggs, onions, bread, and a big jar of homemade mayonnaise. After eating most of the mayo straight with a spoon he said "Thanks. I really liked the liquid bacon. What will they think of next! Liquid bacon!" Another time I found him trying to explain my job - newspaper editor working on a PC - to a group of Gypsies in the market. "Bob watches TV all morning, and then he taps the news into a telegraph - tap! tap! tap! that goes to the printing press and out pops the newspaper." Feri passed way in 1996, about three weeks after I last visited him at his home in Mera. He had a sudden heart failure, which spared him the experience he dreaded most - ever having to visit a hospital. As far as Feri was concerned, hospitals were the main cause of death - in strictly empirical terms, he explained, you see lots of people go into hospitals and never come out, so he wasn't setting foot in one. It hit me pretty hard when he passed, but a bit of him lives every time I pick up a fiddle and put a bow to the strings. 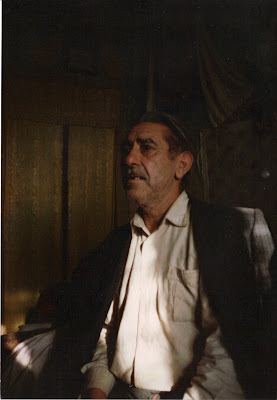 Ah, Bob, great post. If only I could have heard and seen such stuff on my visit to the festival day in Méra this year! But I was with my in-laws and though they're reasonably broad-minded - and one of them happily speaks the Hungarian that he learned during the war - they weren't inclined to hang around in the hopes of seeing gypsies dancing. Next time I'll have to go alone :-)

Thanks for a great post, and also I am happy to find your blog through another blogger (Hungarian Spectrum). I appreciated the wonderful music you posted being played by your friend. Sorry to read of his passing.
Best wishes,
Ron

Here in the USA on a recent google web search (on myself!) scrolling through pages and pages I came across one that brought a smile to my face - Dumneazu - of course I recognized it was you and was happily surprised to find one of the first photos I ever took in Erdely in !991. Thanks to you. I shall never forget the moment of meeting Feri the first time; trekking up the slippery snow packed slope of cigany domb in a blizzard finding him cutting wood! "I am American, photographer and friend of Bob Cohen" His face turned instantly into an ear to ear smile as he rushed me and smothered me in puszi and hugs. Use my image with credit whenever Bob; I have told this story - with your name - countless times, whenever I make my presentations around the world!

Unknown said...
This comment has been removed by a blog administrator.
6:11 PM