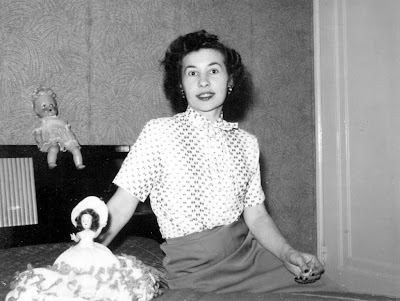 Tommorow, February 18, has always been a Big Day in our family. For one thing, it's my Mother's birthday: Happy Birthday Mom! And also, because on my Mom's birthday 54 years ago, she had me. Yes, my Mom and I share a birthday. She's still healthy and gets around, still rides nine miles a week on her bike when weather permits, and she still cooks a mean lecso. It's a birthday we share with Paris Hilton, Michael Jordan, and Barry Humphries (Dame Edna Everage, my possums...). Buying birthday presents when I was a kid always seemed real - one for Mom, and one for me? It led to a tradition where I would buy birthday gifts for everybody in my family on my birthday and it eventually became a general holiday representing birthdays of all shapes and sizes. I asked her about what it was like having a baby on her birthday. She said it was like passing a cinder block. She wasn't lying. I was a big baby. 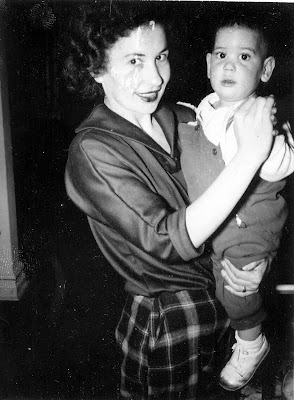 When I was back in New York during the winter I went through boxes of old papers and books tossing out about 75% of all the stuff I stored at my parent's house - I mean, who needs to have my old research materials on Yoruba linguistics and my friend's bound MA thesis about Togolese talking drumming? A decade's worth of anthropology dertitrus? Five cardboard boxes of air-check cassette tapes dating from my ten years as DJ on Boston radio station WMFO? I felt a lot better after dumping a lot of my old acquisitions, but of course I kept a few choice mementos, photos, and stuff I never even knew I had. In one box of old school books I found a couple of old black marble patterned notebooks dating to my first and second grade classes in school. I must have been about six or seven at the time. I actually remember the classes when we were being taught to write. It was kind of an aha! moment when I figured this out. I never knew I would end up becoming a writer and not a fireman or a dinosaur scientist, but there you have it. My first attempts at prose already showed a curiosity towards the elusive nature of existence: 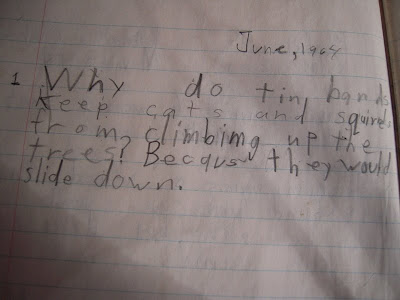 "Why do tin bands keep cats and squirrels from climbing up the trees? Becase they would slide down." I keep wondering what context that would have played in my early education. At the time I can remember packing to evacuate New York during the Cuban Missile Crisis, and I can clearly remember the day President Kennedy was shot... but somehow my school notebooks remain firmly focused on animal pest control. I went to P.S. 71 in the East Tremont section of the Bronx. It was located next door to the old storage library of the Heye Foundation Museum of the American Indian. I grew up thinking that the sight of old buffalo skin tipis and bark wigwams were a normal thing to see out the window every morning as you had your cookies and milk in school. Which may, perhaps, explain this passage from my second grade notebook: 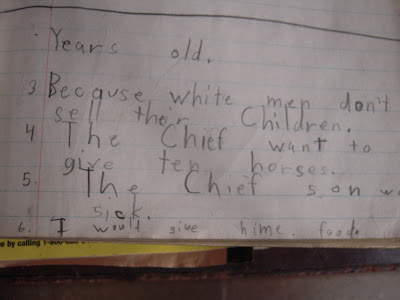 Now, as anybody who knows me can attest, I have never sold any of my children, so obviously it was a lesson well taught. Obvioulsy we had read some kind of cowboy and Indian story and it is an answer to a quiz. But it sheds an interesting light on how cultural outlooks were spread in New York City schools back in the 1960s: "Because white men don't sell their Children." I really wish I knew what the question to that answer was. Another page jumped out at me for being strongly prophetic: 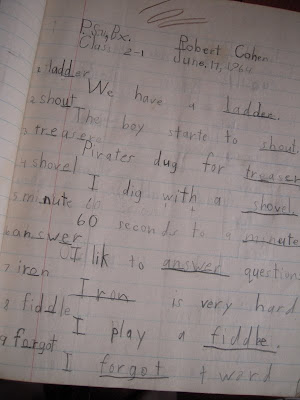 I play a fiddle, and I forgot a word. That pretty much sums up my life over the last 54 years. (It only tells part of the story. I play a Macedonian gaida, a Black Sea Turkish kemence, and a metal bodied resonator guitar too, and I forgot how to speak several languages that I was once conversant in, including Greek, Zulu, and Quechua pretty well completely. And iron is still very hard. Another page presents what may be the first documented case of blogging in my writing career. 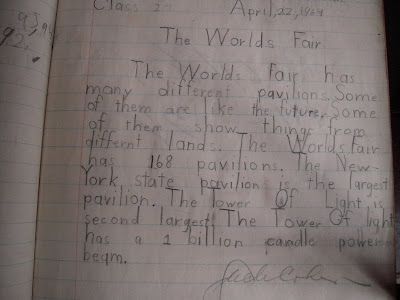 Dated April 22, 1964 and signed by my Dad (for homework purposes, obviously) this one describes my visit to the 1964 New York World's Fair in Queens: "The World's Fair has many different pavilions. Some of them are like the future. Some of them show things from different lands. the Worlds Fair has 168 pavilions. the New York pavilion is the largest pavilion. The Tower Of Light is the second largest. The Tower Of Light has a 1 billion candle power beam." Some of them are like the future... well, from where I am sitting, the version of the future we got seems to have lowered the bar on futures in general. I am still waiting for my jet pack, and for the car from the Ford pavilion that was pre-programmed to go wherever you wanted it to go without any driving skills whatsoever. OK... we finally got video-phones (thanks Skype!) but I and many of my generation still harbor some resentment from having been cheated out of our jet packs. 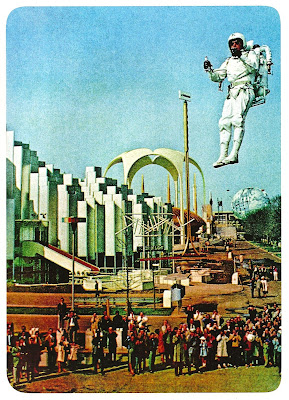 They promised us jet packs, damn it! But instead, we got pop culture. I remember the buzz the week the Beatles first played on the Ed Sullivan show - we kids weren't allowed to watch the show the first night out of a fear - voiced by the Italian Moms on our block - that they might wiggle their hips in the scandalous way Elvis had when he first appeared on Ed Sullivan. It didn't happen, and the next week we were allowed to watch the Fab Four. It obviously made an impression. 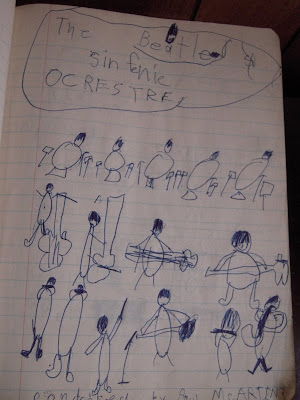 Yes, its the "Beatles Sinfenie Ocrestre! Conducted by Paul McArtini." As for my birthday... tomorrow is the Hungarian celebration of "Torkos Thursday" - a day when many of the restaurants in Budapest cut their menu prices in half for the day (or part of it.) We're heading to the new Master Wang's for Chinese food, which is probably similar to what my Mom will have on her birthday. And, as I hit the cusp of 54, I still have two beautiful women to look after me. That's better than luck. Take, Ikh bin a zeyr mazeldike Yid. 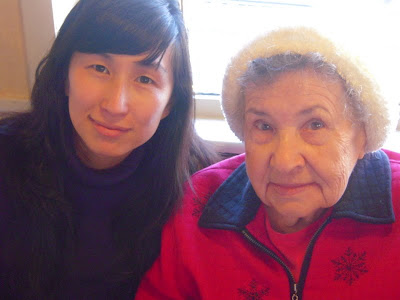 Pink Granite said...
This comment has been removed by a blog administrator.
1:34 PM

Barry in Portland said...
This comment has been removed by a blog administrator.
5:42 PM