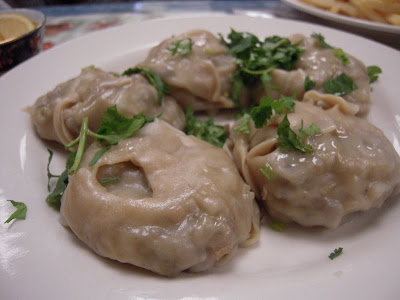 It seems like a long way from the Silk Road, in the New York Diamond district, nested between watch repair shops and diamond resellers is a small and happy oasis of Central Asian Jewish cooking, the Tam Tov Glatt Kosher restaurant. The Tam Tov serves the Bukharan Jewish cooking that has satisified the Persian speaking Jews of Uzbekistan for a long time - the Bukharan Jews are one of the oldest documented ethnic groups in Central Asia, dating back possibly to Assyrian times but more likely to the end of the Persian exile around 500 BC. Since even before the collapse of the Soviet Union, the Bukharan Jews had been leaving Uzbekistan en masse and emigrating to Israel, New York, and Australia. An invite from Pete Rushevsky, klezmer tsimbl player extraordinaire, led up a creaky staircase three floors above 40 West 47th Street (near Rockefeller Center subway on on the B train) to one of the more unique traditions of Jewish cuisine. 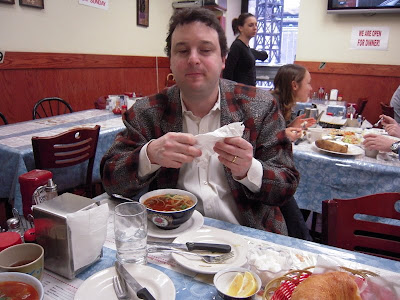 Pete has been keeping a professional eye on the changing face of New York's Jewish music communities as director of the Center for Traditional Music and Dance in New York. The Bukharan Jews have long been the professionals in performing the Shashmakam tradition of Bukharan classical music, a traditon that today has emigrated with the Bukharan Jews and is still a living part of their cultural identity. Bukharan restaurants often feature singers and instrumentalists on weekends and serve as centers for the Central Asian Jewish communities abroad, and the Tam Tov is no exception. Pete got to the Tam Tov first and started by ordering what he said was the best avocado salad in the city, served with excellent home-made lepeshka, the round Uzbek bread we discovered a few years ago while in the Ukraine. Bored of the latkes and borscht repetetiveness of Ukrainian eateries, we started eating at the halal Muslim Uzbek cafes that can be found at most city marketplaces in the Ukraine. And that's where we discovered lagman soup. 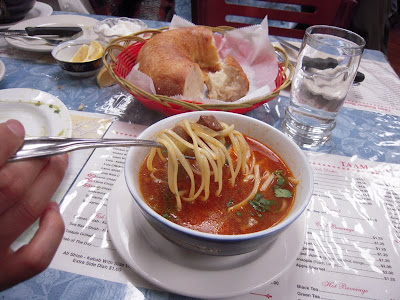 Lagman is the far western version of a Chinese noodle soup - the "men" derives from the pan-asian term for pulled noodles, la mian - but it incorporates western elements as well: tomato soup stock, beef, and thicker wheat noodles, and my guess was that Tam Tov uses linguine. 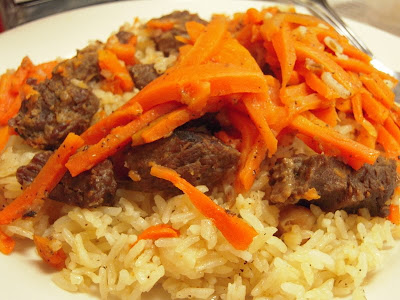 Pete next ordered a couple of Uzbek rice pilaf dishes, the regular Uzbek plov (pictured above) with beef and carrots, and a "Bukharan plov" which had incorporated chicken bits with chopped cilantro and parsley. 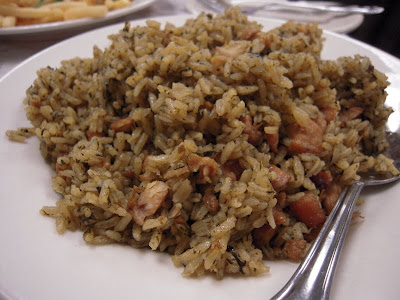 Nearly every table had an order of manti dumplings. These were the classic Asian dumpling that migrated into Russia with the Tatars and Mongols and became known as pierogi, pelmeni, vareniki, or chibureki to the west, and manti in Turkish or mandoo in Korean. Like many, they are pretty simple and filling staples - the Tam Tov version is filled with beef and onions and perked up with a bit of Israeli shrug sauce from a jar on the table. Another nice touch was the french fries: Pete had been singing the praises of the Tam Tov Bukharan french fries... which he said were covered in chopped dill and garlic. Our waitress didn't know what Pete was talking about and from the look on her face, she quite obviously thought the man was insane. Dill? On fries? But eventually she said "OK. You want us to make them ... ummm.. like Bukharan style?" and out they came dressed with diced garlic and parsely. 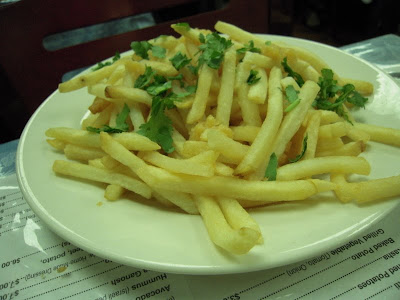 I would try this at home if I ever made french fries at home, which I don't. Now, as many of my readers know, I am often wary of Kosher resturants - I have been to many of them that were mainly fuel stations for the Orthodox, a place to absorb enough kosher calories until the trip home for a real meal. The problem is that the people who prepare most kosher restaurant food simply never have had food that rises above the level of merely palatable, and since they never eat outside of their community, how would they even know that their cooking is mediocre? This is most obvious among the Ultra Orthodox Hasidim, many of whom wont even eat the cooking of other Hasidic kitchens not supervised by their own rabbis. The matzoh-stuffed chicken leg that feeds half of Brooklyn's Jews is not a symbol of good Jewish cuisine. The endless Israeli salads... a cheap and easy way for kosher caterers to avoid actually cooking food. As for tradition? Grandma's cooking is great, but we can't sit at Grandma's table all the time. I have eaten a lot of kosherei in my time, and very little of it made my mouth want to sing the way the Tam Tov did. This is good food: the fact that it is kosher is probably just a side benefit for most of the customers who come for a unqiue, filling, and surprisingly inexpensive meal for midtown Manhattan. 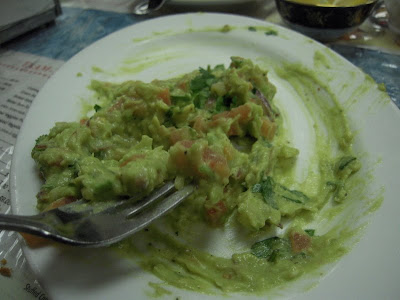 Remember: you go into a doorway, walk up two flights of stairs... past the teenage girls speaking in Russian and the orthodox Jewish guy singing in the hallway in Persian... and do what Rushevsky does: order an avocado salad to go. It really is the best in the city. 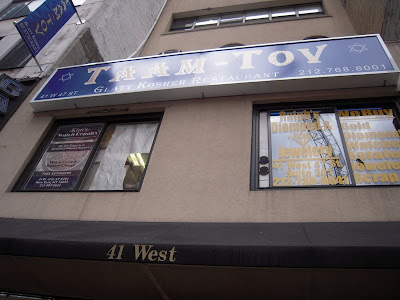 Finally, something for Yankl!

Thanks for posting..looks quite mouth watering!

As a total aside, I was in touch with you once, about a year ago hoping to get some information about a Jewish cemetary in Baia Sprie where I have family interred. Is there a public email address where I can contact you? thanks again

emil lime said...
This comment has been removed by the author.
9:14 AM

I have to second your comments re kosher restaurants. Most of them (in the UK at least) are dreadful!
The last kosher meal I had was at the one-time famous Bloom's in Golders Green, north London. 'Toxic' would be a polite description. I won't comment further on this establishment, except to advise: avoid!!
There's an excellent Moroccan cafe in Windsor, though. This I would recommend. The best tagines and couscous outside of North Afica.
Ali Baba in Aqaba, Jordan, is a great fish restaurant and has the best pickled cukes (pickles)that I've had anywhere, served as a sort of amuse bouche as you sit at your table. Excellent!

Good to know about the jewelery product, and also the information and the facts about it is also good to read.