New York's big annual Balkan music blast - the Zlatne Uste Golden Festival - was yesterday night. Actually, it was on Friday and Saturday nights at the Good Shepherd School in the Innwood district of Manhattan, but I only went on the Big Night... Saturday. And a Big Night it was. The Golden Festival is New Yorks - pardon the horrible pun - Big Blow Out, organized by the amazing Zltne Uste Brass Band - a conglomeration of dedicated Balkan Brass musicians who keep the older tradition of both Balkan Brass bands and Balkan Music Festivals alive in New York. I got there early in order to catch one of the wonderfully local workshop presentations by New Yorks ethnic family groups who keep the old traditions alive in the big city... Beyle Schaechter-Gottesman with her large and active family presenting the Yiddish song tradition that she - almost single handedly - kept alive in the Bronx for generations to enjoy. 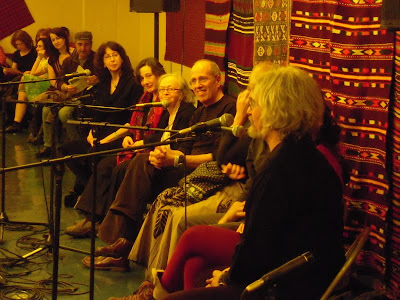 Beyle - a poet, a teacher, and very active Yiddish songwriter was the recipient of a National Endowment for the Arts Heritage award in 2005 for her dedication to keeping Yiddish song traditions alive. Now 89 years young, she still belts out Yiddish songs with family, strength and good humor. Beyle's session was early in the evening, before things got really crowded, so it was a comfortable evening of family and song. Next up, however, was what we had all come for: Noise. 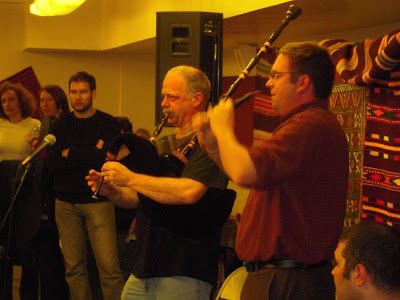 New York is not known as a hotbed of Breton music, but there is a newly formed Bagad - Breton bagpipe band - forming and they showed up to shatter some eardrums. A surprisingly large amount of people knew how to dance the various circle dances. I love this stuff - I reminded me of when I was in Nantes in 1999 at a boozy after-midnight party at the Summer Festival and the DJ suddenly switched from Techno to Breton Rock: a huge crowd went wild dancing these old circles dances. 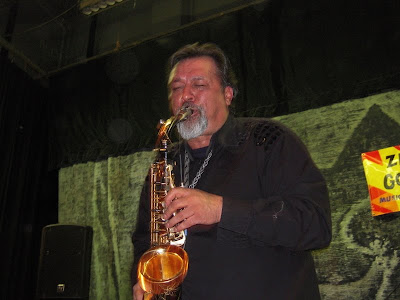 While most of the performers at Golden Festival are people from New York's folk music scene, there are a lot of folks who play within New Yorks ethnic communities - Albanian, Macedonians, Italians, Turks - as well as some of the growing Balkan Roma communities who have settled in the Bronx and Yonkers. Yuri Yunakov broght his modern dance friendly Bulgarian wedding music to the stage. Downstairs I heard a steady stream of New York's various "Gypsy Punk" bands run through their paces. 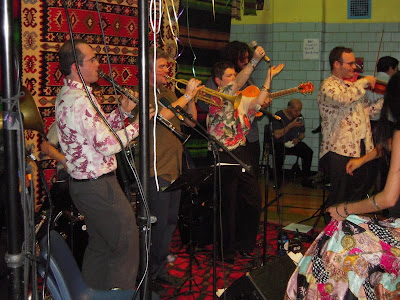 My favorite of these are probably The Luminescent Orchestrii and Romashka, led by Budapest alumni Ljova Zhurbin and Inna Barmash. We hung out downstairs in the Kafana, where dozens of New York etnic food purveyors had donated free food as sponorship. The traditional free beer, however, had disappeared in a lisensing dispute with the city fathers... so we had to make due with spirits smuggled in from without. Notice Sarah Gancher, Girl Detective, in the back there? Another Budapest alumnus, Sarah and husband Rick were both in fine form, emitting a strange blue light throughout the evening. They did not step on anything dangerous or hurt anyone! Long live the Dominican package stores of Northen Manhattan! 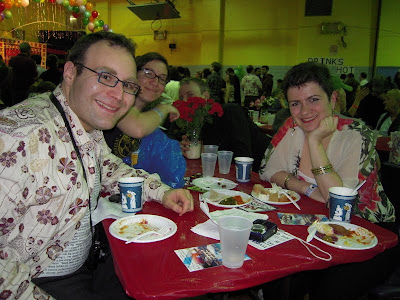 Why oh why is Golden Fest only once a year?