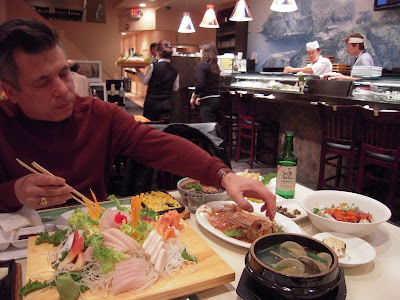 My old buddy, Marshall Tito, the guiding spirit of Former Makedoslavian Republic of Yugodonia (FMRY) drove up from the bowels of New Jersey last night a bit late to make it into the glowing lights of New York City for dinner, so we headed out into the borderlands along the Hudson in search of something to eat. Now, Madame Tito is not a fan of Asian food... but she was at the hotel taking care of cute little Tito Jr., so something Asian was definately going to be on the menu. 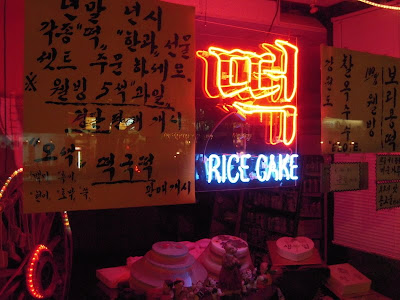 The towns along the Palisades Cliffs in New Jersey have always been a string of suburban ethnoid enclves, and the old Italian and German emigrant neighborhoods are now diminished and the nabes turn overwhelmingly Spanish towards the south, and Korean towards the more affluent north up towards the George Washington Bridge. After cruising around Fort Lee, NJ - and passing a couple of inviting Korean BBQ places, Vietnamese pho joints, and never finding the Malaysian restaurant we were searching... we turned tail and made it down the hill to Palisades Park, the single most densly populated Korean suburb in the area. You want serious Korean? Palisades Park. 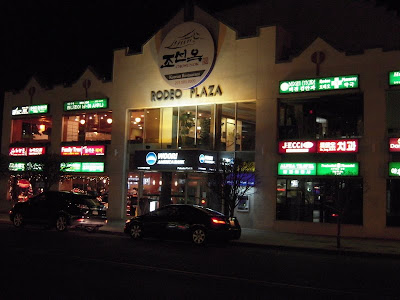 Walking along Broad Street is like walking along a street in Seoul. Dozens of Korean delicatessens, bars, bakeries, and restaurants... we've been here before. Since Marshall Tito (or Walter, as his friends sometimes call him) felt like something light, we passed on the BBQ, and looking into one brightly lit place, Tito saw some... crispy fish being served. Crispy fish! Aha! Who doesn't like crispy fish? 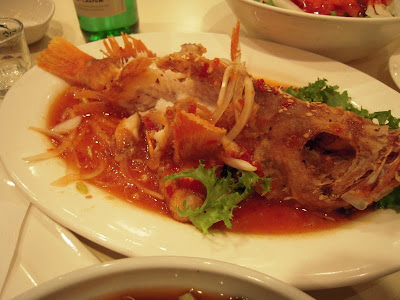 We were seated and immediately knew it was going to be good... our hostess could barely communicate in English. That is not rare in NJ Korean places, but it almost guarantees fantastic food and great service. Live octopus and sea squirts swimming around in a tank... another good sign. A gaggle of middle aged Korean men smoking cigarettes just outside the door. Must be good! No other round-eyed customers... an excellent marker of quality! The menu had a few items listed in English, most all of which was unfamiliar... cod liver casserole? Pollack roe stew? A column of "Live Fish Dishes?" Welcome to the Dokdo, a Korean seafood restaurant, located at 280 Broad Avenue beneath a Dentist office acorss the street from the Palisades Park Police Dept. at the corner of Broad St. and East Central Blvd. (Tel: 201-242-9999) 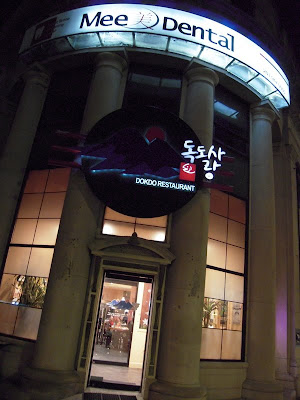 Koreans are proud of their food, and it is one cuisine that does not compromise or get watered down into an American version. The Koreans of New Jersey are a prosperous bunch - and they want the best when they eat. Fresh fish is essential. When we saw a bright room full of Koreans wolfing down fish, we knew we had hit paydirt. We naively thought we might start with some sushi, maybe try a fish stew, but eventually Marshall Tito simply relied on the time honored technique of pointing at other people's tables and saying "I want that." It always works. We finally agreed with our hostess to split the cheapest seafood combo at $60 for two persons. I mean, heck... for two? Why not? Koreans like to cover the table with small dishes... going out is always some kind of banquet. All we knew was that on the other tables there was a crispy fish. And then it began. An unending procession of seafood. Incredible seafood. Never have I had so much... so goooood. First they brought out some seared salmon sushi and edamame with pickled onions. I have never, ever, eaten anything that had artistically drizzled sauce on the plate, so I was skeptical... for a second. Ony a second. 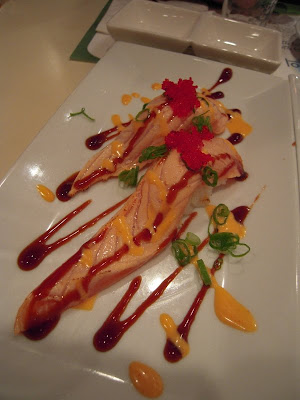 Amazing... better than any sushi I have had on this trip... and that would be the last we saw of rice for the rest of the meal. Next... a flurry of small dishes appeared. they are delicious, especially the guys. ... which are sea snails, shelled at the table by our hostess. Steamed monkfish roe, the foie gras of the sea. Monkfish may be ugly, but they taste great. Now comes a pair of fresh, very fat oysters with an artistic garnish of herring roe? Some grilled mushrooms? Shrimp tempura? A small bowl of something white was produced which the waitress could not explain... we were instructed to stir it up and slug it down in one shot and chase it with a shot of shoju, the clear Korean liquor. Then I realized that it was a yam starch concoction... putting my mind to rest that somebody had been jerking off a fish in the back room. But, hey, since a cod doesn't count as homo, boruch, omeyn, down the drain. 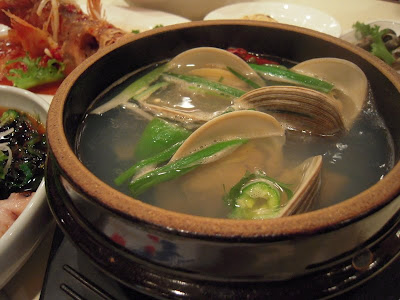 Next came clam soup in clear pepper broth, a plate of corn caserole, and a bowl of raw seafood in cold broth with cellophane noodles and red pepper. Some of these things had tentacles... some didn't, some were recognizable, some were not, all were incredibly good. I don't know if they sneaked any sea squirt in there, but if they did, it tasted good and I thank them. 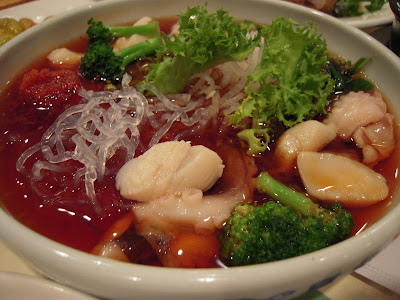 This was a surprising and fantastic dish - sort of a Korean seviche, but with octopus, scallops, cuttlefish, and squid... and just in case we didn't have enough squid, a new salad of iced large squid slices, herring roe, lettuce and red pepper paste now appeared. After admiring it, a waitress came and tossed it for us. We must have seemed like two farm boys, marveling at the fact that there were ice cubes in our salad. If you don't know what to do, the staff will jump in and show you. 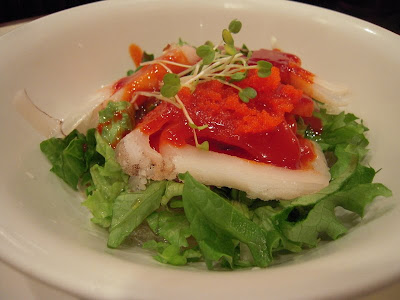 Whoa! This was getting to be a lot of food. I was already complementing Marshall Tito on his blind luck in choosing of spur of the moment Korean joints, comparable to his amazing victories in Vis and his miraculous escape from Jajce, when out comes a bit more... grilled eel. 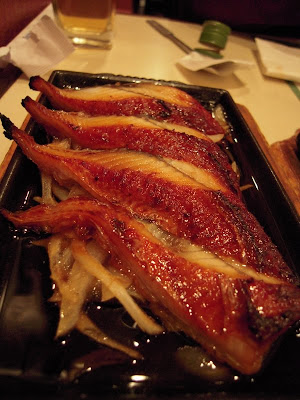 How are we ever going to finish this? We are stuffed to the gills with crusteacens and mollusks and cephalopods and things even lower on the Linnean scale of evolution when our waitress/hostess shows up at the table with this: 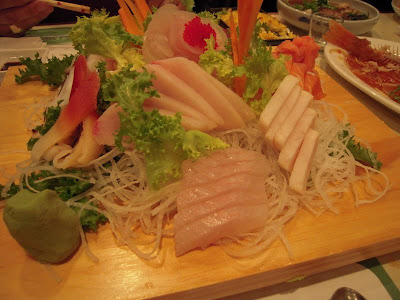 A massive platter of thick cut Korean style sashimi, known simply as hwe, or fish. Tuna, salmon, sea clam, pollack, yellowtail, octopus, squid, white tuna... piled on a bed of shaved radish vermicelli. Lucky I didn't finish all the periwinkles! Korean sashimi is cut thicker than Japanese sashimi - it is a hefty mouthful, and there is a lot of it. Other tables had a mountain of some thin cut white sashimi on a huge bed of radish noodles, but this was perfect for those who think that sashimi is only a light meal. It wasn't. It was chunk o' fish. You get the soy sauce and wasabi to go with it, but you also get a spicy red pepper sauce to dip it in which makes a world of difference, and you can chase it with clam broth, buckwheat tea, or soju. Boredom does not occur in Korean cuisine. 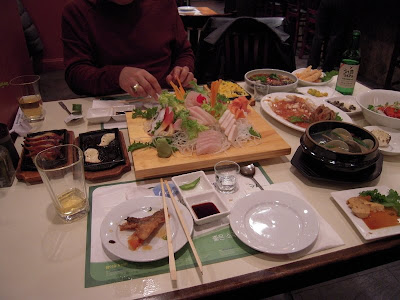 Yes, I am glad to report, we did finish it... slowly. Eating at a Korean restaurant serves the purpose that going to a bar does in Europe: it is a night out, you take your time, you enjoy talk with your friends, you drink a bit, and make the evening last. And if you think you are getting bored of regular Japanese sushi and sashimi, try the Korean version. After all, Dokdo is the Korean word for the Liancourt Islands, a couple of rocks in the sea of Japan that have been the bone of diplomatic contention between Korea and Japan for decades. And might I suggest sashimi to both sides... the boneless contention? 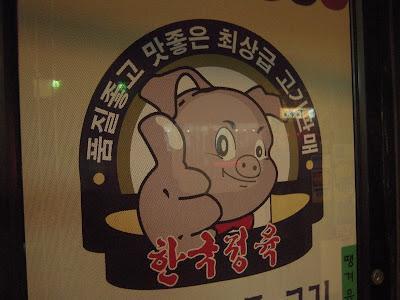 UPDATE Januray 26: a few days later I went back to the Dokdo with Fumie and my sister Pam. The hostess recognized me from my first visit, and she then convinced the owner to updgrade our combo plate order to the special Korean specialty combo for four people... and I can say it was every bit as good as on our first visit. The new selection was quite different, and it had a few of those seafood bits that we non-Koreans don't usually order. As Fumie said, these were just the things a Japanese would never put in front of a round-eye guest. The Koreans don't have any such hang-ups. These are Korean delicacies, so your Korean hosts are delighted for you to try them. The idea is to get your brain around the idea that you are happy to try them. This is Andrew Zimmern's Bizarre Foods territory... some of the stuff that I would never have ordered but once it was put in front of me... well I just had to try it. Like the sea squirts. 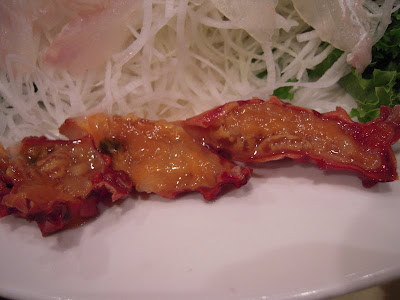 These were actually... interesting? They had an intense seafood flavor, a bit amoniac, a bit bitter... they had an outer skin that was smooth and leathery, and you had to suck out the orange meaty bit. It was bit like like eating seafood from a toy football on the halfshell. Well... I have done it. I ate sea squirt. After that, the sea urchin gonads - uni in Japanese - were easy. 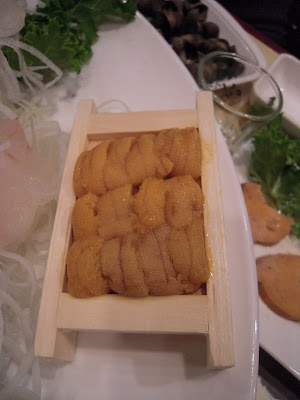 Simply buttery, rich, soft roes, never mind that they come from something in the starfish family. Like I said... going ever lower into the Linnean catagories we finally cam to this: sea cucumber. Sea cucumber is essentially a giant sea worm. Now, even though I have lived ten years with a Japanese woman who eats all kinds of creepy crawlies I have never thought I would be sitting at table eating giant sea worms, but there is a first time for everything. First of all... these things are blue. Animal protein blue. That is not a common color in meat. 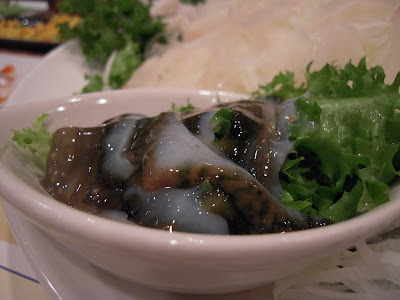 I have never eaten blue meat before, and most likely, neither have you. Second: sea cucumbers are not very smart. I mean, they are called sea cucumbers, not sea professors or sea lawyers. Even after they have been sliced, when you touch them with your chopstick they move a bit. I may well be the First Jew In The World Who Ate Raw Sea Cucumber. It can not possibly get more unkosher than this. Well, looks never stopped me. In they go! 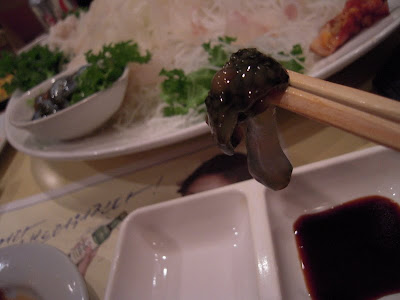 Aha! Superclam! Or tasty little ball of hard, chewy snot. The jury is still out on this one. I was the only one to eat these - everybody else tried them (or claimed to) and left the rest for me. Whether out of spite, adventure, or a natural boy scout's urge to gross out the girls at the table I almost finished the order. Almost. They had a surprisingly tough, chewy, almost crunchy texture, very salty, almost bitter... Now I know why things like this are such good fish bait. So remember: if you try the Dokdo... it is great. Even the creepy crawlies.
Posted by dumneazu at 11:53 AM

Some of that stuff is beyond Linnaeus - I mean, it's pre-Cambrian!

Animesh Singh said...
This comment has been removed by a blog administrator.
9:36 AM

Anonymous said...
This comment has been removed by a blog administrator.
4:37 AM

all chinese or japanese food!!