Until a few years ago, Romania was one of the few European countries that put the seasoning in the term "seasoned traveller." Poor, shocked after decades of the rule of Nicolai Ceaucescu and a violent and confusing excuse for a revolution in 1989, Romania in the 1990s was not what one would call a tourist magnet. Hotels were nightmarish, the food was remarkably bad, transportation often non existent. It was never an easy trip. The contrast between the physical beauty of the country and its unique national culture juxtaposed against the crushing poverty of the post communist years made it a must-write story for the intrepid travel writer who wanted an easy sell to shock editors with tales of Romania's lack of amenities. And yes, I was guilty on all charges. (The latest victim to fall into this trap was the intrepid Tony Bourdain, who filmed his worst ever episode of No Reservations in Romania last year, triggering a small national scandal in the process. In defense of our boy from Leonia, I still don't think it was his fault.) 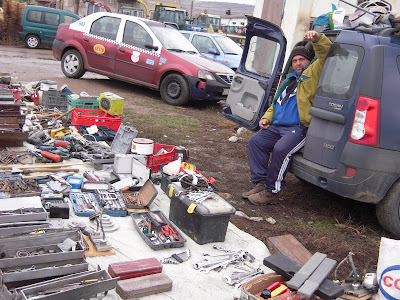 The image of poor, isolated Romania being a traveller's nightmare is absolutely no longer the case. Romania has changed a lot, and although one can see still scenes of poverty that are rare in western Europe, the country has developed much farther than any other I know of in East Europe. (A friend working in the Republic of Moldova recently described Chisinau as "Think of Romania fifteen years ago.") If you want to get a sense of how thing were fifteen years ago, you actually have to travel a bit. Not too far. Like take a cab ride from the center of Cluj (Kolozsvar in Hungarian) to the saturday flea market, for example. 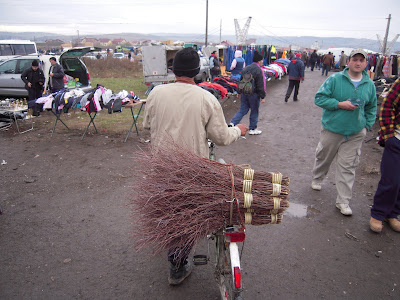 The flea market in Cluj used to be located a bit closer to town along the railroad tracks, but has now been pushed out even farther into a muddy field along the Somes River. I've been a fan of the Cluj flea market since I first came in 1990 - it's always been either muddy (winter) or dusty (summer) and although the city fathers wouldn't want to admit it, it may be one of the hottest tourist attractions in the city. This is where you can find peasants bringing in things to sell from the surrounding country, locals selling car parts, tools, tires, and plain, simple junk, often trucked in directly from flea markets in Germany or Belgium, for resale in a place where "Made in Germany" still resounds with the promise of freedom. 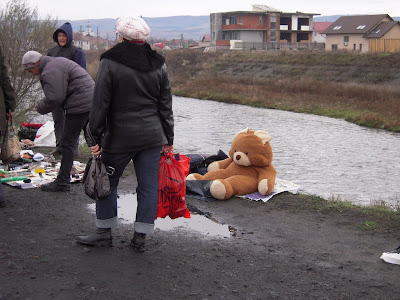 Romanians are now citizens of the EU, with freedom of travel, and millions of them are busy making money working in France, Spain, Italy and Ireland these days, sending home money, or coming home and spending it. So why not stop at a few junk markets on your drive back from France and resell the stuff at home like you used to do? 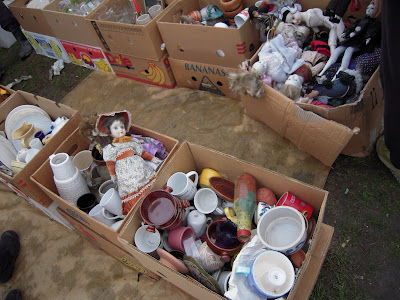 It is also the best place to pick up CDs of music (it hasn't been all that long since you came here to pick up casettes... and a long, long time ago there would be fiddlers playing at the beer tents, but that's something only us greybeards remember anymore...) The choice is between the slick, Gypsy oriented style of manele, with its lyrics of crime and gang violence (lyrics are either about "my enemies" or "things I can do with my dick" essentially) or the somewhat stilted version of Romanian folk music performed as musica populara, now playing the role of "Country and Eastern" (songs about pretty village girls, and "things I can do with my sheep.") Music lovers tend to be fans of one genre or the other, rarely both. 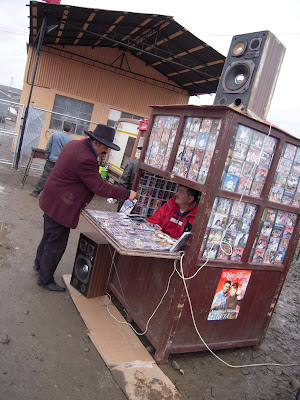 Somebody asked me "Doesn't Cluj have a Gypsy Market?" In a sense, no, but yes. The Flea Market (Oser de Haine in Romanian) attracts a lot of Roma, especially the Gaboresti clan, a tribe who specialize in retail sales of anything they can carry: kitchen wares, plastic shoes, chinese cutlery. They travel widely, to Istanbul, Milan, Berlin, Paris buying wholesale goods and running it back to the final point of sale... a muddy field in Romania. Recognizable by their costume - big hats and baggy suit pants for men, impeccably clean colored skirts for women - the Gaborii are just one of the groups that come to the market each saturday. A large proportion of the Gaborii are strict Seventh Day Adventists - if you can imagine Gypsies that do not drink, eat pork, and pray on Saturdays. The Gabor guys I have known have generally had strong moral misgivings about anything they had done the night before... my kind of Adventists... 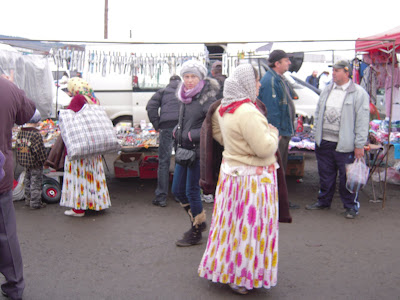 It may look like a pajama party in a vast mud field, but it is all about business here, and where there is biznitsa you will find the Roma. All kinds of them. Kalderash, Rudari, musician familes, village gypsies, either hawking wares or buying staples like rugs with Elvis Presly imprinted on them. But I don't have any idea where the idea came from that this is a "Gypsy" market. 98 percent of the folks here are non Gypsy Gadjos...i.e. customers... And business is hungry work. For that, you need meat. And the meat you want is a few mici "little buggers" the short form of mititei, which can proudly present itself as the national meatwad of Romania. 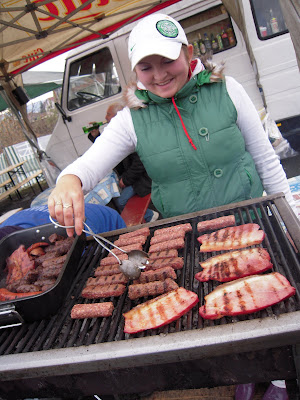 Mici are the northernmost expression of the Turko-Balkan gastronomic phenomenom of hamburger... what does one do when beef is less than tender? Grind and grill! The Ottoman Turks introduced köfte, delicate small ground beef rolls, which led to the balkan cevapi, and finally to the much larger mici, sized to match Romanian appetites. Recipe: grind the cow up, form into sausage shapes, and grill it! Roma have a few basic laws governing eating - basically defining "clean" food as opposed to non clean "gadjo" food - you won't see them in restaurants for this reason - but grill meat in the open where everyone can see it, and no problem! It looks like meat: eat it! 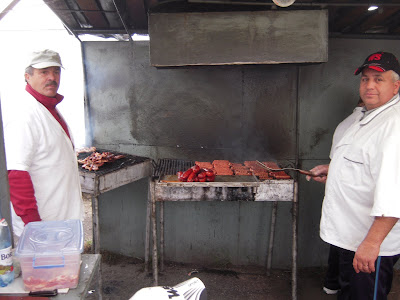 Romanians have figured out the perfect combination of beef cuts to produce the most flavorful version of "tubesteak" using meat from the neck as well as lesser used meat cuts, and if you get really lucky your meat roll will be relatively free of bits of bone or hair. In towns you can find these at beer halls and many restaurants, but the old fashioned, hefty, greasy and char-grilled versions are best tasted at a flea market, fair, or roadhouse where they grill them outdoors and serve them hot to the waiting crowds, who wolf them down standing up with bread and bland mustard, all washed down with a cold beer. At about US .75 cents a piece, you won't find cheaper or tastier beef this side of Uzbekistan. In 1993 I was in Bacau, in Moldavia, eating mici that cost (at that time) about 10 cents a piece when I got a call that a band I was playing in at the time (shudder!) was suddenly invited to play in Israel. Two weeks later I was in a fancy "nouvelle Israeli cuisine" restaurant in Jerusalem with Michael Alpert. Being nearly penniless at the time, I simply opted for a beer (in Israel there is nothing worth eating besides the $1.00 street felafuls, believe me...) while Michael ordered the mici plate.. the cheapest thing on the menu at about USD $16 a plate. When he asked me how they stacked up against the mici of the Bacau market I simply said "Fifteen dollars and ninety cents different." 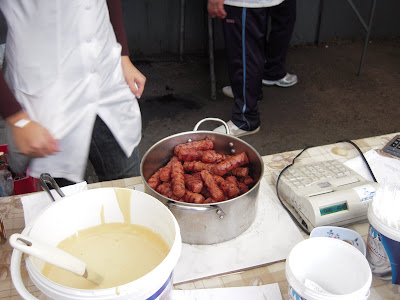 I have to admit, I have eaten some pretty dodgy mici in my time, often in situations far from medical assistance, but I have never fallen ill from mici. I got violently sick in Bulgaria some years back after eating a ground pork kebabche at the Koprivshtitsa festival, which sent me to the Sofia hospital, but that may be because it was pork (the mici meat in use in Bulgaria, where any meat recipe that was originally of Turkish origin is compulsively and contentiously re-imagined using the most non-halal meat possible) that had sat in the sun for a day or so. I haven't eaten any Bulgarian kebabche since. 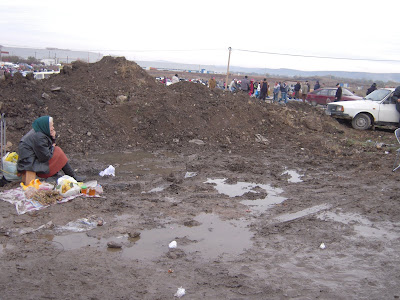 So, now that we have seen the nostalgic side of Romania - muddy fields, second hand clothes sold out of vans, meat grilled a la Neanderthal... are we ready for the new Romania? I certainly hope so. It is definately worth the trip. 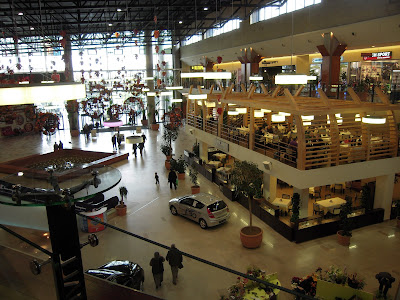 Unknown said...
This comment has been removed by the author.
2:50 AM

Trixi: I just asked a taxi driver. It's about a kilometer east of where the old one was.

Unknown said...
This comment has been removed by the author.
6:26 AM