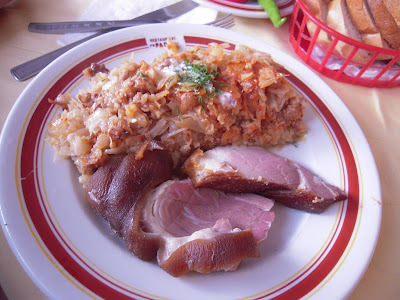 Romania is a big country. Unlike Hungary, which really boasts only one real urban center, Romania has several historic regions with regional capitals, and the cultures of the regions are different enough to keep any trip around Romania interesting. If you are visiting Romania, whatever you do, get the hell out of Bucharest! Transylvania is large enough to have several regional towns that reflect different local traditions, and my favorite is always going to be Cluj-Napoca, known in Hungarian as Kolozsvár, German as Klausenburg, and Romani as Kokoshvar. One feature of Transylvania is the cuisine: a mix of Romanian country food, Hungarian restaurant staples, and always served in huge piles. If anything is emblematic of Transyvanian cuisine, it would be the quantity. Quality counts, but you can't beat quantity. 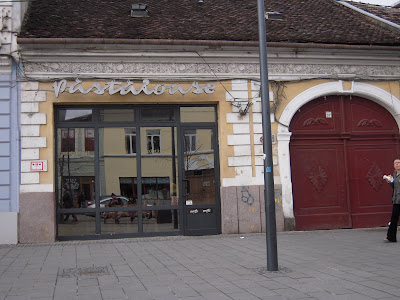 Any meat served in portions smaller than the size of your head is considered an appetizer. Soups are brough to the table in kettles so that you can refill your bowl. And my favorite place in Cluj for local food is the Pastaioase at B-dul Eroilor 35 in downtown, a few steps away from the Hungarian church. This place has been here for ages and serves cheap lunches with varză clujeana "Cluj Cabbage" its specialty. 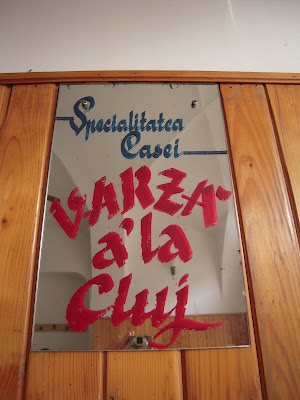 This is what Magyars know as Kolozsvári rakott káposzta, or Cluj style stuffed cabbage. If you are not from Hungary you may be wondering why I use multiple names for the town in different languages. When writing about territories that were once within the historic boundaries of the Kingdom of Hungary, Magyars always use the Hungarian place name. Hungarian newspapaers that even try to call a town by its Romanian (Cluj) or Serbian (Novi Sad) or Slovak name (Bratislava) are deluged by angry letters correcting the offending writer (Kolozsvár! Újvidék! Pozsony!) and the occasional violent street demonstration for breaking the rule. And since I am writing in Budapest, that last option is something one would want to take into consideration. I've actually had good friends, highly educated and well traveled Hungarians, grow livid because I used a Romanian place name in my writing, even when the topic had nothing to do with Hungarian history. As far as I am concerned, when writing about a place I prefer to use the name in the national language or just not be too tight assed about it. So there. We all eat stuffed cabbage, so who cares how we call it? And it is as good as it looks... smoked hunk of pork hock next to a pile of stewed cabbage with paprika and ground pork... thick water buffalo sour cream... this breaks about every rule of kosher eating in the book. 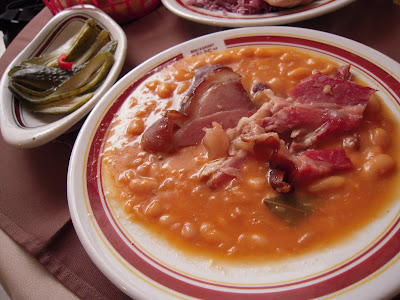 You might not want to eat this every day, in which case you can have the simple smoked pork and beans dish on offer - ciolan cu fasole. This is the stuff that you want when you open a can of pork and beans, not that sweet goopy canned stuff we were raised with in the States! This is real Romanian truck driver food, and some of the best can be found at the road houses along the highway between Oradea (Nagyvárad!) and Huedin (Bánffyhunyad!) near Ciucea (Csucsa!) on the drive into Cluj from the north. Our meal came to about US $6.oo each. 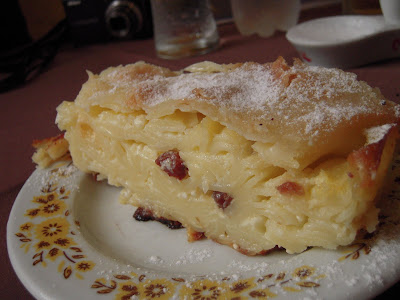 If, by any quantum leap of possibility, you have room for dessert, they have vargabéles, which is the Hungarian name for a sweet bread pudding dessert but in Transylvania it means straightforward Jewish lokshn kugel, noodles baked with sweet farmer cheese and raisins. Up in Maramures the Romanian peasants still call this kigl, a linguistic borrowing straight from the Hungarian pronounciation of Yiddish. No surprise - Cluj was the home of one of the more influential Hasidic dynasties, the Klausenbergers, or Kloysenbuger hoyf, who are still around today in Brooklyn, Antwerp and Israel. There are several synagogues, including this one near the main market, now restored as a university research intitute for Judaistic studies. 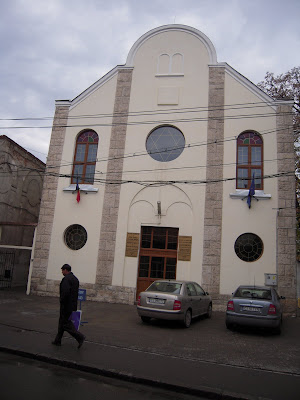 Now you have to walk that meal off... Even in absolutely crap weather I can recomend the back streets of Cluj. It is modernizing fast, like most Romanian towns, but you still find hidden bits of history on the back streets, like this house - built sometiome around 1750 or so - which has remained in place while the streets have risen in height over the centuries. 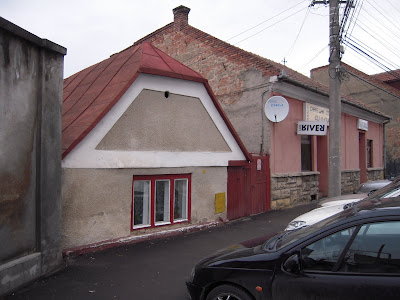 The news is that I will be off to New York and the USA in a week, so I may miss Transylvania a bit (although some of the work I will be doing in NY will be tangentially Transylvania-related.) For the next two months expect a lot of in-depth looks at Korean and Chinese food, as well as discussions on the hermeneutics of Jersey's tiny hamburgers. But New York neeeds me... there are shopping malls in the New Jersey suburbs that might need some Transylvanian advice on how to really reach your target maket groups... and I've got some hot new marketing ideas that I picked up on my travels! 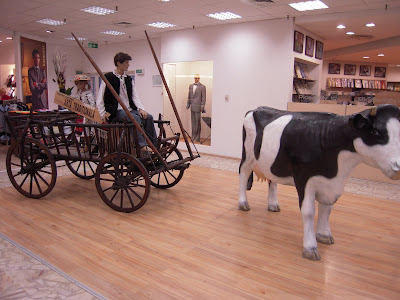 Oh, this bring back some good memories, back when i was in first year of university, 7 years ago. I found this place by accident and i was so pleased to find the exact cooking style of my grandma that i ended up eating there almost every day.

I'm following your blog for 3 years or so, searching for pleskavica. Its one of the best blogs i'm reading.

Cluj is one of my favorite cities in Romania, too. We got out of Bucharest at least once or twice a month during my Fulbright year there long ago.

BTW, is Ciucea vs. Csucsa just a spelling difference, or is there a pronunciation difference, too?

If anything is emblematic of Transyvanian cuisine, it would be the quantity.

Barock Music, an instrument and Cd shop on the Str. Bisericii!