The Angry Donuts of Transylvania. Again.

I have many favorite European cities, often ones not on the semi-official list of cute and wonderful places to visit. I live in Budapest, but think Veszprém, my Mother's birthplace, is the most beautiful town in Hungary. I love Paris but find the warmth of Nantes more to my liking. My favorite urban centers are probably Istanbul (incredible history, even more incredible köfte meatballs), Milan (uniquely ugly neighborhoods but free food during the aperitivi "happy hour") Sarajevo (for beauty and heroism, not to mention the cevapi) and - in Romania - Cluj. Yes, Cluj-Napoca, also known in Hungarian as Kolozsvár, is probably the place that feels most like my second home town in Europe, although I haven't spent all that much time there in the last few years. 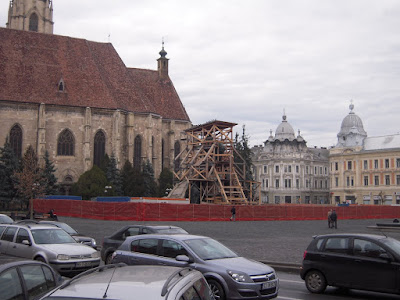 The new town town center by Unirii Square is getting a face lift next to the Hungarian Church and the statue of King Mátyás after years of contentious debate that was started when the "Mad Mayor" Gheorghe Funar started digging up spurious archeological sites around the chursh. Today, the park around the church has been stoned over (for "modern purposes like skateboarding" says the new Mayor, only slightly less mad) and statue of King Mátyás is getting his first restoration in many years. Filled with historic architecture, a lively university culture, and a funky ethnic mix, Cluj remains my choice for visiting in Romania, not the least because it has the best donuts on the surface of the planet earth. Angry donuts. 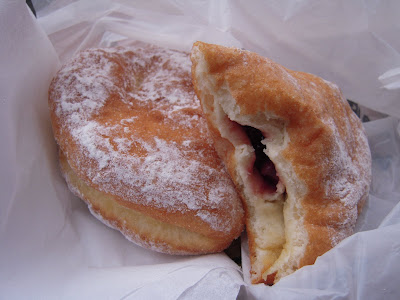 I have written about the Angry Donuts (Gogoasa Infuriata) on this blog before, but how can one ever keep quiet about fried dough filled with sour cherries or vanilla cream. The dough is warm when you get it and the frying has given a bit of crunchy bite to the skin... yes, these are donuts you can write home about, which is exactly what I am doing now... (photos may be NSFW) 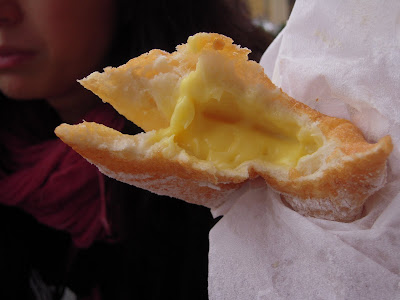 Gogoasa Infuriata seems to have originally been a Cluj donut stand that existed years ago, and over the last few years it has started to franchise out with branches in Craiova and even Bucharest itself. I found a Bucharest branch of Gogoasa Infuriata at the crowded and monstrous Piaţa Unirii next to the 104 Bus stop...As soon as I called out to my band members to wait they started laughing at me. "What is it with Americans and donuts?" I think it is because everybody watches the Simpsons (dubbed in Hungarian) that Americans are stereotyped as donut eaters, but I could not for the life of me do anything to dispel the notion . Donuts... donuts... 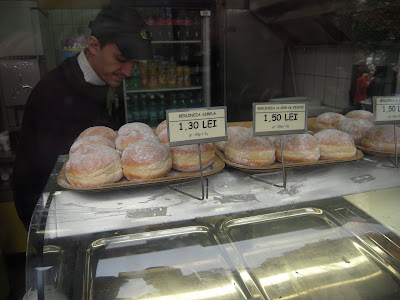 I had to try them. Unfortunately, these were sold under the Gogoasa Infuriata label, but were just not the same... basically, these were just normal jelly donuts, exactly the same as you would find in any American diner or supermarket. Actually, they were frigging great, but they were just not a real Gogoasa Infuriata! After Bucharest, I sent the boys home and took the train from Arad to Cluj, where I met Fumie. I promised her a weekend in Cluj with all the donuts for free on me! And so we began... on our donut eating quest... eating... eating... donuts... I have posted on Gogoasa Infuriate on this blog before, and I can't really improve on what I said in 2007: "Regardless of what Romania may have or have not contributed to the developement of Western Civilization, any lack is more than made up for by their Angry Donuts. This is quite possibly the best fast food franchise located on the planet earth. I'm not prone to hyperbole, but this modest Romanian donut franchise puts Dunkin Donuts or Krispy Kreme to shame.... The idea is so simple these could easily be a hit anywhere in the world - keeping the batches small means every donut is fresh and warm, and the menu is short: donuts filled with apples, sour cherry jam, vanilla or chocoalte cream, or salty cheese." 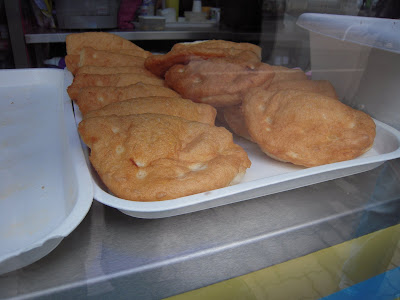 The coffee is of a type rare in Europe: regular good old filter coffee served in a take away paper cup. You know it has to be good because there is always a line out in front." Angry Donuts are easy to find - one is on str. Memorandului on the main square at Piata Unirii, while the other is tucked on a side street next to the main outdoor market at Mihai Viteazu Square. 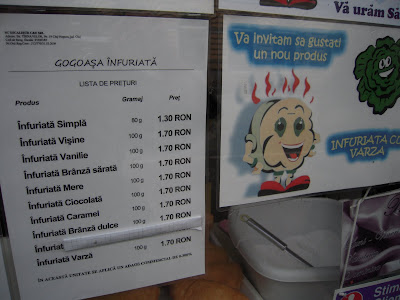 Thanks for posting that article, I will be visiting Transylvania in December heading right to the Angry donuts.

Lucky me. They are just around the corner from my workplace. :) I knew that they were the best in town... but I had no idea that they were such a top issue.

I am an American living in Romania, east on the border of Moldova, in the small town of Barlad. I just may get on a train to go get an angry donut. Romanian food in general is the best on the planet. Give me a mamaliga any day over a hamburger. Thanks for the info.
Carolyn

It may actually be a worthwhile trip. Never been to Barlad, but I have seen that there is a McDonald's in Focsani... and kept on going... update your blog, send some links, it sounds fascinating!

We just got back from our first trip to Hungary and Romania and hands-down the best donuts we ate were hot from the farm-fryer in a little village lost in the Maramures (self-filled with farm jam, of course!). Your angry donuts made my mouth water too! We just so happen to live in Bursa, Turkey, so I also get my fill of yummy köfte on a regular basis. I enjoyed your delicious blog, thanks!

A good donut is an absolute joy. I wouldn't trust a man or woman or didn't like donuts.

Is there one of these in Oradea?