If anything can be classified as Romania's National Soup, it would be ciorba de burta... tripe soup (more literally "gut soup.") It is everywhere - at restaurants, at pizzerias, at railway station quick food bars, at fancy shopping mall food courts. You simply can't feed Romanian men if they have no chance to wolf down a bowl of cream o' stomach lining soup. 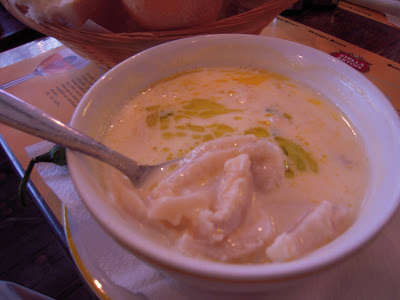 Sure, this may be one of the posts where I gross out 40% of my North American readers (eewwww! They eat guts!) but I am firmly on the side of ciorba de burta. I not only can stomach eating stomach, I'm an active partisan, and when in Romania I make it a point of honor to eat ciorba de burta at least once a day, maybe even more if no one is watching. Ciorba de burta makes an excellent breakfast if you are staying in a less than five star hotel, and you know that it will be excellent in the morning when most of the staff order it for their breakfast. I wonder how many cows have to be slaughtered daily to produce this much tripe - I am sure more Romanians order tripe soup every day than order steak or anything else made of beef. Romanian ciorba most closely resembles the classic parent dish inherited from the Ottoman Turkish era: işkembe çorba, which I have rhapsodized about during our times in Istanbul. Macedonian and Greek tripe ciorbas that I have eaten came in clear soup broth, while the Romanian and Turkish versions are often stewed with milk and thickened with a flour roux. As always, you might add a bit of vinegar or lemon juice to sour it up a bit, and one almost always orders it with extra sour cream - preferably thick fresh water buffalo sour cream - and a fresh or pickled hot green pepper. 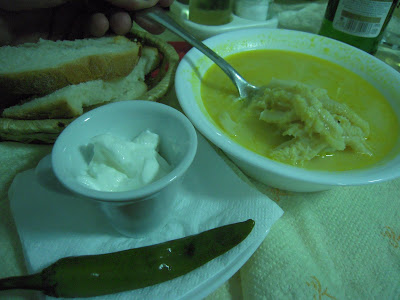 Tripe ciorba is considered to be something of a folk medicine, especially for hangovers, and in Greece and Turkey there are specialized eateries called "Patzas" that open only late at night until breakfast and serve only a selection of gut and extremeity soups (legs, heads, tail, or other "tails") and where you can go to meet all the victims of a town's nightlife at 7 in the morning before they have to crawl into their office jobs and pretend to work until the mid day siesta rolls around. 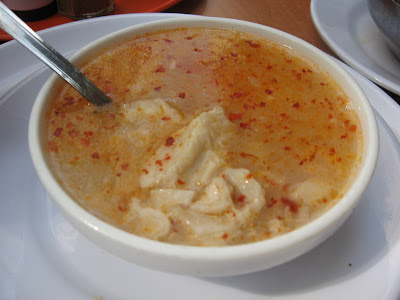 Except in Romania there is no siesta. An odd fact is that beyond the borders of Romania in Moldova or Hungary, there is no tripe soup. None. Nimic. I asked a friend in Moldova about this and he answered "No, they only eat that across the border." Imagine: Romanians with no ciorba de burta. Unthinkable! Perhaps it is because of the complicated process of cooking beef tripe - washing and parboiling do little to remove the unique smell of cooking trip. Think of what tripe does: it digests. And having digested, it produces... yes... something smelly. Depending on your cultural orientation, that either makes you hungry or inspires a fart joke. Hungarians occasionally eat pacal pörkölt - tripe stewed with paprika, but some kind of chemical reaction bewteen cow stomache and paprika occurs and it becomes one of the only tripe foods I (pardon the pun) can't stomach.
Posted by dumneazu at 11:17 AM

Bob, your posts make me wish I could travel right now, and give me a long list of places to go eat once I do get out of dodge. As for manele lyrics, though, isn't another category "how much money I have/check out my ride"?

This looks tasty! My wife made this "<a href=http://culinare.tv/ciorba-de-burta" title="ciorba de burta>ciorba de burta</a>" and it is amazing! But I do not think it is the same recipe like on culinare.tv

Ciorba de burta said...
This comment has been removed by a blog administrator.
4:39 PM