We Own All the Salt Cod in Hungary. All of it.

Hungary doesn’t really have anything approaching a “summer cuisine.” In summer, Hungarians eat the same thing they do in winter – soups, stews, things sautéed in paprika – but usually just a bit less. Vegetables are an afterthought, and fish is mainly carp, usually boiled into fish soup. We do not like carp. Fumie comes from Tokyo, I come from New York, and both of us were brought up next to fresh fish from the sea. Carp are fresh fish from irrigation ditches. How do we survive? Salted cod. Baccalà, bacalhau, bacalao, morue. We hoard the stuff. 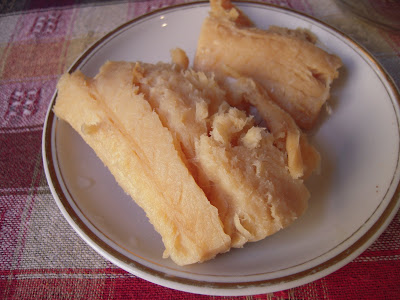 In our home we maintain what may be the the largest stock of salted cod in Hungary. It may be dangerous to say this openly - I can imagine hungry employees of the Portuguese embassy laying siege to my flat – but at any given time I probably have at least two kilos of non-perishable salted codfish in my fridge. Whenever we travel abroad I try and pick up a kilo or two, and my Mom helps by sending me some from the United States of New Jersey from time to time. I often wonder what the customs officials think when they find the bacalao packages – do they even recognize that this stuff is fish? 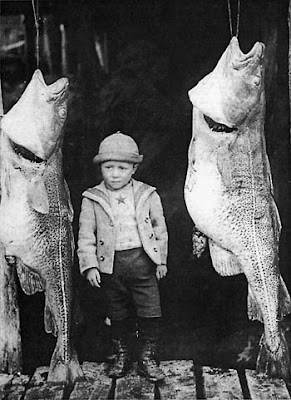 Well, yes, it is fish, in fact, it isn’t even very strange fish, but the secret is in the salting and the soaking. Salted cod was developed during the middle ages in order to preserve fish to be packed inland from the sea. Since Catholics abstained from meat on Fridays and during Lent, salted cod became a valuable commodity, and evidence shows that Basque and English fishermen were catching cod off Newfoundland at least fifty years before Columbus sailed for the Indies. Not only were they catching cod, they were salt drying it, a process that can only be done on land. The cagey Basque and Bristol fishermen were not about to tell everybody where their fishy gold mine was, although Columbus himself spent several years sailing in the Northern Atlantic and probably knew of the Grand Banks fishery. It wasn’t dreams of gold and spices that drove the Europeans to sail west – it was dreams of cod, almost as good as gold. 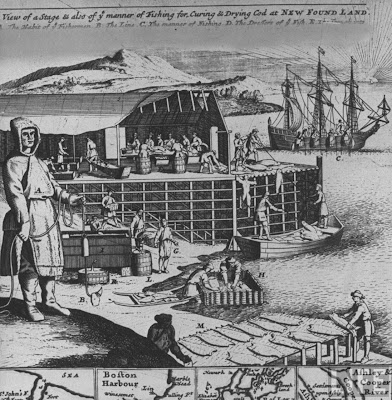 Sadly, the amazing Atlantic cod fishery is over - the Grand Banks stocks collapsed in the 1990s, due to overfishing by factory ships using nets which destroyed the ocean bottom structure that provided the cod with breeding grounds. And it doen't look like the fish are ever coming back. Cod is no longer the cheap fish it was when I was growing up - it has become nasty expensive, in fact. What used to be a poor man's food is now one of the more pricey ingredients in traditional mediterranean cuisines. A good staring point for all things salted cod would be Mark Kurlansky’s Cod: A Biography of the Fish That Changed the World - a hard to put down mixture of history and recipes. 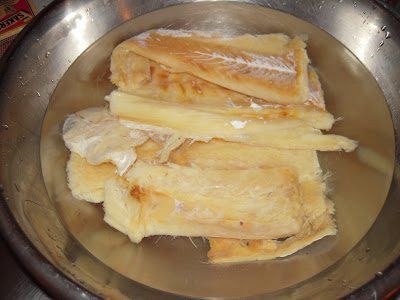 The secret to good salted codfish is in the soaking. An overnight soak in water leaches out most, but not all, of the salt. Many recipes require a day long soak, but the result is bland, so we like to keep a bit of the salty taste if I am making codfish fritters or a pasta sauce. In Portugal, most restaurants keep cod soaking in vats varying from six hour soaks to two day soaks, and the customer can request his preference. 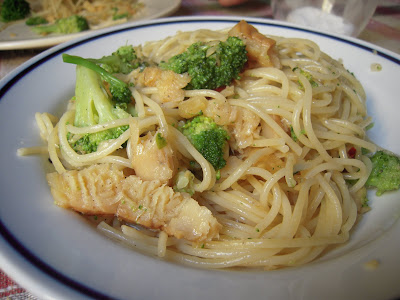 The main characteristic of salted codfish is the texture – it is denser and meatier than fresh fish, and cod is a pretty delicate and soft white fish. In France the practice is to salt fresh cod - morue - in the market place to firm it up. We’ve done this in Hungary using Alaskan pollack fillets from the supermarket, covering them in a bed of coarse salt for a day, which essentially cooks and preserves the flesh. Then we soak them for a bit to desalinate the fillets, and poach them in hot water as we do for hard salted cod. But it is never as dense and chewy as good bacalao. 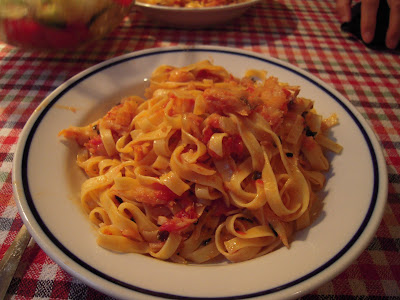 Of course, we don't eat bacalao that often, but we somehow do manage to eat intensely non-Hungarian amounts of ocean fish. Our local CBA supermarket in Zugló (the corner on Nagy Lajos and Erszébet Királyné, by the #3 tram) was recently bought by a Greek owner, who exhibits that exotic EU sense of cross border mercantilism that so is lacking in Hungarian markets (which usually stock only products Hungarians are used to eating. You like paprika? They stock it.) So far I have found real Italian salami (cheaper than hot dogs!) Italian cappelini pasta, and last week the holy grail of keeping The Tokyo Rose happy: fresh frozen sardines. 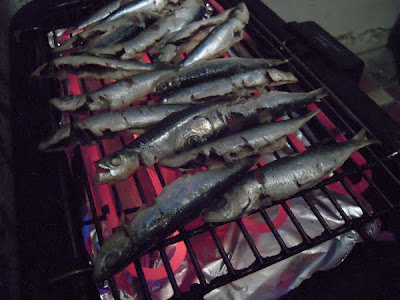 I know that "fresh frozen" is an oxymoron, but these were from Croatia at FT469 a half kilo... and remarkably clear eyed and fresh smelling when thawed - and Fumie knows how to judge a sardine by smell the way a sommelier can sniff a fine wine. Fumie had been pining for what she calls "oily smelly stinky little fish" this summer, and so now our freezer is packed with these frozen sardines. She guts them, salts them, pops them on the electric grill on our terrace, driving all the neighborhood cats crazy and probably really confusing our neighbors who have never smelled oily fish being grilled. But they are Not Carp. They are wonderful. [photo by Fumie from her secret blog] 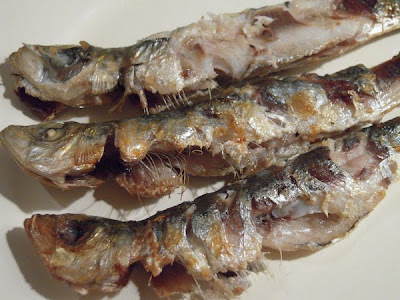 I've been enjoying reading through your old posts about Budapest in preparation for a trip there at the end of September.

I'll have to check out that rather posh CBA. (most CBAs require that you suck in your gut to get through past the nenis in the narrow aisles) Amazing that good intl food is starting to be available more than Bp than just Culinaris. I remember having to search high and low for simple anchovy paste.

The salami is in the cooler near the cold cuts aisle. they are small liked salamis... sold in plastic wrap at about Ft 1200 a package... but theyhave real fermented italian salami flavor!

There is a place in the old Jewish quarter of Rome that has wonderful battered and fried Baccala. Cheap wine and good company. Heaven!

The smell of saba (mackeral) cooking is almost as enticing to me as the smell of bacon, although I prefer saba in the evening (with sake) and bacon in the morning (with coffee).

"Hungary doesn’t really have anything approaching a “summer cuisine.”"
I was just making that same complaint last Friday while tucking into a bowl of hot Szegedi fish soup for lunch in Komarom, not having found anything cold on the menu. And I don't like carp, either.
A thousand years of living in this climate and the only summer dish the Magyars can come up with is cold fruit soup. A fine dish (with inescapable echoes of Kool-Aid) but hardly adequate.
When is someone going to introduce a vegetable-eating gene into the local DNA?

As for sardines, they can also be got cheap (I forget how cheap) at the fish stall downstairs at the Big Market Hall (Nagyvasarcsarnok.) Unfrozen octopus and other cephalopods, too, for those who know how to cook them.

Delicious salt cod! Or as we call it in the West Indies (where it's also hugely popular), "saltfish". One of my favourite breakfast foods is sadha roti (like pita bread) stuffed with sliced potatoes that have been fried with onion, garlic, and saltfish. mmmmmmm.

I started following your blog a little while back and am riveted by both the affectionate food stories and the Klezmer music scene. So, hello!