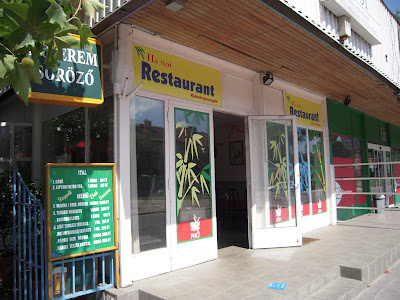 Budapest is not exactly a city that attracts a lot of immigrants, and although you can find non-Hungarian food, this city is not exactly an exotic foodie's paradise. There are ethnic restaurants, but with rare exceptions, they are expensive and mediocre, like a lot of the Budapest restaurant scene these days. Usually, if we want to eat Japanese or Chinese food, we wait until fate finds us in Vienna or Paris. Turkish food? - wait for a trip to Berlin, or far better yet, Istanbul. But one group has been in Budapest long enough to establish their own neighborhood hangouts - the Vietnamese. The Vietnamese came in large numbers during the 1970s, when the communist government offered scholarships and aid during the Vietnam War. A lot of the Vietnamese here grew up speaking flawless Hungarian, and being sharp business folk, a lot of them left for France and Germany after 1990, when the opportunity arose. Still, today we have a few places to eat Viet food - the Four Tigers market, for one, where the Vietnamese food stands seem to have completely pushed out the Chinese food stands from our favorite stall line in the back of the market. 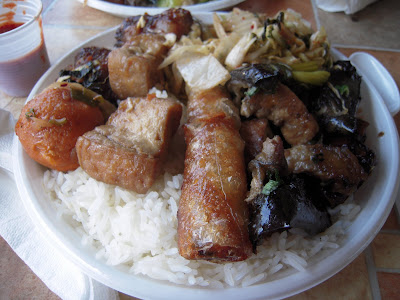 At Four Tigers Market Ft 600 gets you a pick and choose rice plate from one of the four Vietnamese lunch stands - and you can get cafe sua da, the iced expresso coffee that the Vietnamese adopted and improved on from their previous French Insect Overlords. And then there is our "local" Vietamese eatery - the Hanoi, located a ten minute bike ride away from us in our own sprawling district of Zuglo (Vezér út 129) 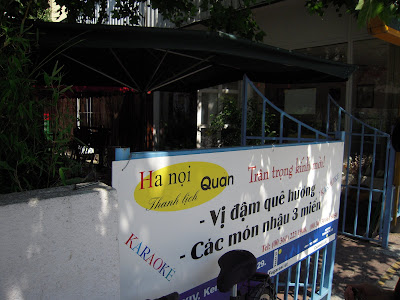 It has been our private custom on Fumie's birthday to make sure she eats seafood, which is no small deal when you live in a landlocked country bounded by neighbors such as Slovakia, Romania, and Slovenia. So off we pedaled to try this place out - it has had hideous reviews, which noted long waits for food, a totally disorganized and unprofessional staff, and one report about a fight breaking out during dinner. Sounds just like my kind of place. We sat ourselves in the garden, which is possibly Budapest's only actual bamboo grove authentically strewn with bottle caps and ciggy butts, and checked out the menu. 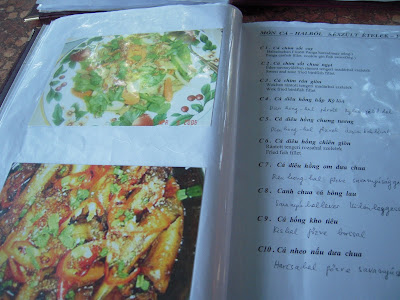 And damn, it actually is Vietnamese! This ain't no "Kinai Bufe" serving canned sweet and sour, this is the real deal! We started safe, with pho, the national soup with rice noodles (FT900) which is perfect for a scorching hot afternoon meal as long as somebody else is laboring in a hot kitchen preparing it. Pho is pronounced "fuh" as if you were cussing somebody out but thought better of it on the first syllable. 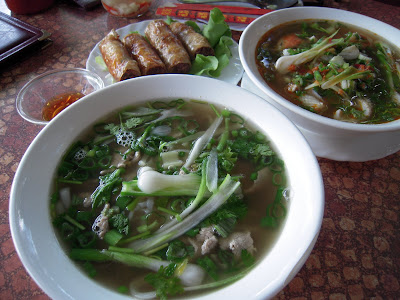 Fumie, of course, tried the seafood pho (FT 1400) which had a hefty amount of shrimp, squid, and mussels floating in a spicy broth. Since she grew up in the seafood capital of the Universe, located on Tokyo Bay, she was satisfied with the huge shrimp and squid which disappeared down her gullet in a wink. These creatures did not die in vain. They died in Fumie's soup, or on their way there, at least. 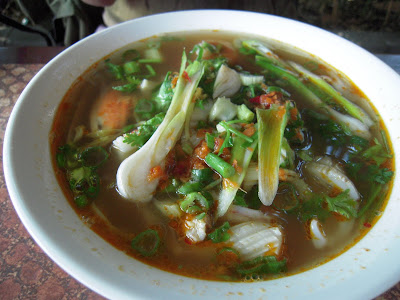 Next she turned to the side dishes: shrimp wrapped in rice paper filled with rice noodles. These were not the best in the world... but then, we realized that there did not seem to be any aged Vietnamese grandmas tottering around the place, which is usually the sign of a great Viet kitchen. No, these were just teenagers, it seemed, and they had lived in Budapest so long that they didn't feel their rolls had to compete with some street stall selling amazingly delicious shrimp rolls on every corner as they might in Saigon, or Paris, or New York... or even Hollywood, Florida. 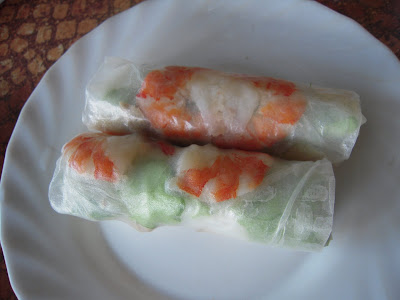 The same could be said for the fried nem. Ordering these in Hungary is always a linguistic treat - nem means "spring roll" in Vietnamese, but it also means "no" in Hungarian. I lived with a dozen Vietnamese during college, so I usually call them, simply, nem. I want some nem! Vietnamese nem, in fact, played a central role in the long ago drama that led to the happy abandonment of my adolescent state of of virginity, but that is another story and not one for the printed page. 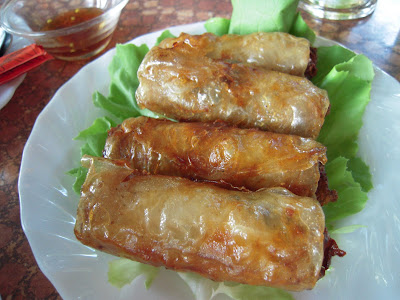 These nem were perfect, but the dipping sauce was a bit uninspired - nothing more than a bowl of fish sauce - and a bottle of Sriracha sauce. All in all a fine meal, but not outstanding. One of these days we will go back and order from the non-soup menu. When I have a wad of cash. This is a modest restaurant but not a cheap one. Most of the seafood items are justifiably pricy, but this seems to a be a place where the local Vietnamese community goes when it needs to celebrate and not count pennies in public. And who knows... maybe we were just unlucky - perhaps somedays there are some Vietamese grannies in the kitchen.
Posted by dumneazu at 7:50 AM

Sririacha is fondly known as hot cock sauce in the carpetblog house!

Ruth said...
This comment has been removed by the author.
8:32 AM

Despite the flaws, this looks great... or at least the pictures do....so maybe sample again (with me)? End of August perhaps?

Having been here, I agree with your critique. For pho, however, I find no compelling reason to go anywhere but the 4 Tigers market - except for the money-changers, who get a bit sketchy around my lady friend.