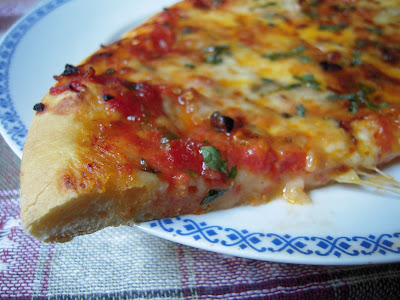 Late summer is the time for pizza. Nothing says summer like a nice slice on the street or waiting for the pizza to be delivered. We love pizza. We adore it. We worship at the temple of the Great God Zza, He of the dripping cheese and crusty perfection. It's not enough to eat pizza, one must know pizza: one of my favorite food blogs is Slice, the pizza blog. Of course, on a more realistic level we live in Budapest, which is not one of the world's great pizza towns. Sure, we have pizza in Hungary, in fact we have a lot of pizza - after 1990 pizza became the substitute for most Eastern European medium-fast foods. Before 1992 the late night munchy target of Hungary used to be the meleg szendvics, a toasted slice of bread with melted cheese and ketchup dreamed up in imitation of the bakery pizzas which were the only thing Hungarians could ever afford to eat when they visited Italy back in the days when you could only leave Hungary with a limited amount of foreign hard currency. The meleg szendvics is the default mode for Hungarian pizza, and the reason that Hungarians always like to squirt ketchup on top of pizza. After the first Yugoslav civil war, Hungarian refugees from Serbian Voivodina began introducing the vastly superior Yugo pizza, and since then pizzerias sprang up everywhere. The problem is, most aren't very good. Most of the few decent pizzas - Okay Italia, Trattoria Toscana, or Terzio Cerchio - are too expensive to eat in the New York manner, meaning downing one or two a day. The only option left: make it at home. 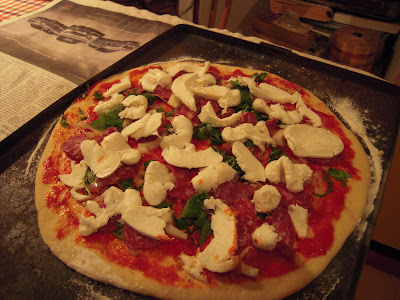 This is where having an obsessive baker living in your home helps. Fumie bikes across town in search of flour with the proper gluten levels, and she will get up at two AM to check on how her sourdough culture is doing. Pizza dough is a cinch for her. For some reason, Fumie loves to bake on those days when the thermometer breaks record highs and everybody else heads to the beach. But nothing beats pizza on a hot summer day, right? 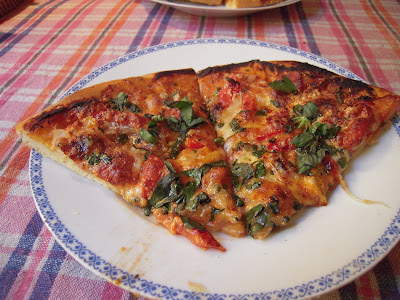 At least we can get the basics: marzano tomatos for homemade sauce, basil we grow on our balcony, and for some reason locally made mozzarella cheese has become reasonably cheap and good lately. I've learned to go light on the toppings: basil, red onion, italian salami, anchovies... Last week we tried adding sliced mangalitsa bacon to the pizza. Utter FAIL.. the result was slimey... the mangalitsa basically just melted into tasteless pools of lard and dripped off the slices. Kids, don't try this at home! 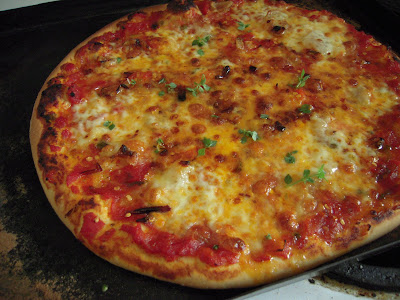 Mangalitza (a local breed of curly haired pig) is one of those products Hungarians laud as branded local "Hungaricums" within the EU, and not long ago we bought some mangalitsa pork chops to try with a friend who is a wine importer. Well... maybe it was just our pig, but the curly haired pig is bred for its fat, not for its meat. You can eat it, but... textureless, insipid, bland, entirely without character. The regular Hungarian pork that we get at any butchers is far superior for meat, so we'll be giving the curly hired pig a pass in the future. 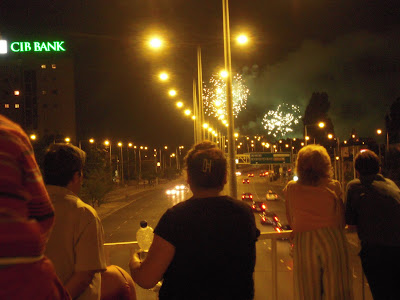 August 20 is the Hungarian National Holiday. It's a combination of holidays, actually, St. Stephen's Day, New Bread Day, and Constitution Day all rolled into one big do which culminates with fireworks over the Danube at night. The crowds along the Danube banks downtown are huge, and a couple of years ago a freak storm broke out just as the fireworks were beginning, flooding the streets, blowing giant fireworks into the city, and stampeding the crowd, causing injuries and several dead from boat accidents in the river. So, to avoid any possible apocalyptic destruction, we just biked up the street to the highway overpass here in Zugló for a clear view of the show going on downtown a few kilometers west of us. 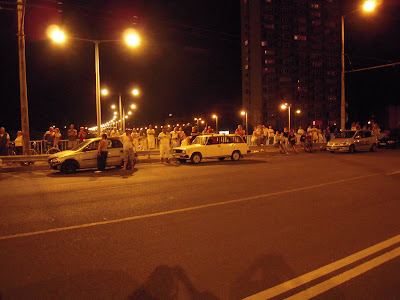 The overpass bridge was packed with people, who had brought out lawn chairs and bowls of popcorn for the event. Cars parked along the bridge, taxis waited for fares, and lots of the local Gypsy families were out enjoying the evening - this part of Zugló is considered to be the residence area of choice for better off Roma in Budapest. 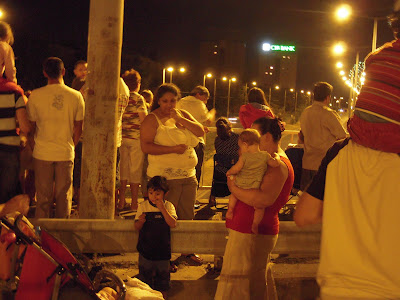 There was also an air show over the Danube during the afternoon, but scandal erupted when it turned out the sponsors, the Austrian makers of the putrid Red Bull Energy Drink - a vile sugary brew that tastes like bubblegum with caffeine - had paid off the city council to cancel the usual flyover of the Hungarian Air Force. So in the morning I got to see a formation of frustrated fighter planes angrily zipping past my bedroom window. 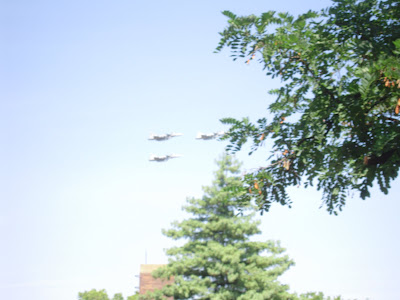 I have a question...

I always thought a worse Hungarian pizza sin is using sour cream as pizza sauce rather than tomato sauce. In my home town This has recently been extended to using mayonnaise (my wife loves it). If the French and the Italians only knew what was going on over here...

Getting closer to that question, I was recently explaining my enthusiasm for lángos to a Hungarian friend. She invited me to a garden party to serve me kemencében sült lángos. It was breath-takingly simple (dough, sour cream and angol szalonna) and breath-takingly good. But was it lángos? It tasted more like deep pan pizza. In the reverie that followed, I came to understand not only the enthusiasm for pizza in Hungary (15 of 20 of my new intake of secondary school students gave Pizza as their favorite food) but the use of sour cream as a sauce.

Here's the question, I understand that deep pan pizzas were developed in Chicago, not Italy. Chicago was also a centre of Hungarian immigration. Is there anything to suggest that Deep Pan pizza is an example of Hungarian/Italian fusion cooking?

I thought that Cleveland was pretty much the center, with Pittsburgh being second in the Hungarian landing places.

No comment on Hungarian pizza. On some days I meditate about what might be if I were to open a god's-honest pizzeria here and how long would it take before I had to shutter it.

By the way, there's supposed to be some pretty good 'za at New York Pizza on Szondi utca in Terezvaros. But the best I've had thus far is the Kosher pizza at Cari Mama. Second is the white-colored Töki Pompos place that pops up at festivals - quite a nice light and crispy crust. I'm still trying to source their flour.

Deep pan chicago pizza is essentially a cross between lasagna and pizza. They can be good on their own terms, but it doesn't please the Lord ZZa.

Cleveland used to be the Hungarian center of America, but today it is probably the New York suburban town of New Brunswick, NJ, with smaller satellite communities all over the place: Hollywood, Florida (Transylvanians), San Francisco, Bridgeport, Conn. Hungarians in the Us assimilate so fast they no longer tend to form "ethnic neighborhoods"

Thanks for your responses they prompted me to do my own research - which I suppose I should have done in the first place - I just didn't think there would be a wikipedia article on lángos.

This suggests there is a link between langos and pizza , which long predates the foundation of Chicago:

"The Glossary of Beszterce[4], the most ancient currently known Hungarian “dictionary”, dating back to the first quarter of the 15th century reveals that the ultimate ancestor of flat breads was the panis focacius attributed to the Romans (of which derives also the Italian flat bread called focaccia). In ancient Rome, panis focacius[5] was a flat bread baked in the ashes of the fireplace from the Latin focus meaning “centre”, ”flame” and also “fireplace”."

The reference for panis focacius describes it as an "early prototype of modern pizza."

So it seems the Hungarian enthusiasm for deep frying lángos is the innovation.

Unknown said...
This comment has been removed by a blog administrator.
4:54 AM