The mid summer doldrums are called “cucumber season” in Hungary. Nothing much happens, everybody is on vacation, and all the newspapers can report is that the cucumbers are ripening. I'm going a bit stir crazy, and you are all invited along! We’ve been taking it easy this summer – which is to say we can’t afford any big adventures abroad this summer and are most likely to be found biking around Zugló, our leafy district of outer Pest. One of the things I most appreciate about life in Hungary are open markets. Especially Bosnyak tér out here in district XIV. When I am back in the US I enjoy the convenience of the American supermarket and the range of foods you can get, but you really cannot beat the European farmer’s market for honest, fresh, seasonal food. 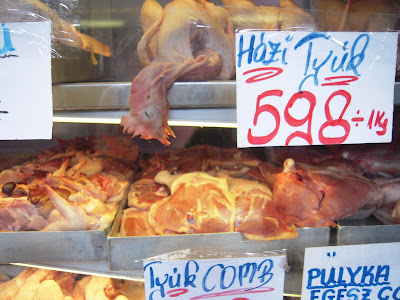 In the US most people under the age of thirty have never bought meat from a real butcher. You know, the fat moustached guy who hands you a slice of salami over the counter to taste before hacking away at a hunk of cow and wrapping it up in brown paper for you? In the states, your meat is guaranteed to come wrapped in plastic with lots of stamps attesting to the free range, additive free, bio-friendly origin of the thing wrapped in plastic before you. In Hungary, as in most of Europe, we get our meat from a butcher, preferably in a marketplace where all you could ever want from a bird is available. 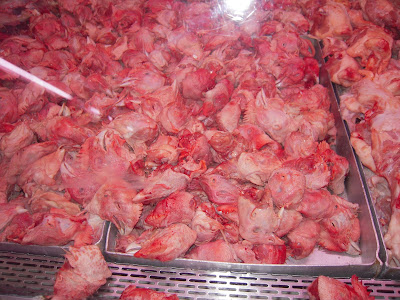 Chicken heads, for example. Or chicken feet. You ever wonder why your chicken soup doesn’t have that rich yellow broth action going on? Boiled chicken heads and feet. About as expensive as buying soup cubes and much, much better. Not only chicken heads, but let’s push this "Nightmare on Poultry Street" theme one step further. 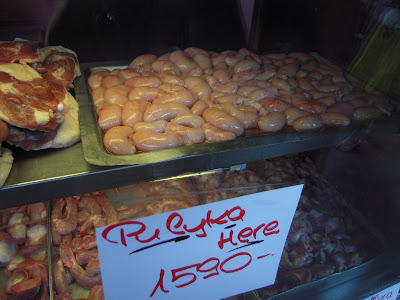 How about turkey balls? Yes the word here is Hungarian for testicles. They live up inside the bird but they are definitely there, and people definitely eat them. Turkey balls are unfamiliar to me - we usually get fried rooster balls, and not only Magyars love them. I don’t actually go out of my way to search for them but I have had them fried… or as we mentioned in the spring there is rooster ball stew. 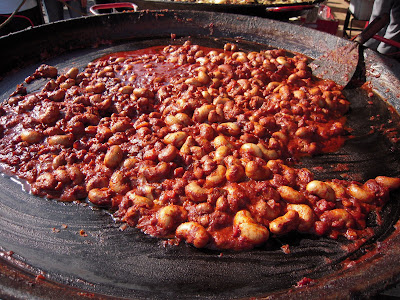 I think the unspoken subtext of this ingredient is that it is "good for men" uhhuh uhhuh... Eat a plate of avian balls and inherit the strength of a turkey? Asian folk cuisine has lots of similar concoctions "for men" but I think cobra blood or endangered species bear balls make a lot better marketing/branding strategy than one that says "Men: You, too, can attain the strength of a chicken!" Of course, when it comes to actually playing with your food, nobody can beat the butchers of Italy in the creative department: 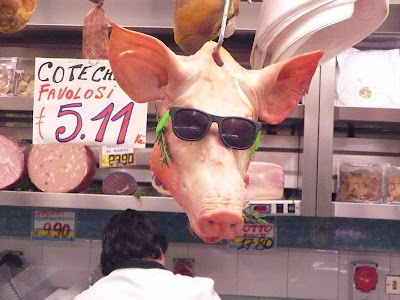 Buying potatoes should be easy, but in Hungary we basically have one variety: the red, yellow fleshed, soft rose colored spud. If you want any other variety you have to search hard in the market. This is our onion and potato seller, who is a Hungarian Bulgarian who served in the Bulgarian army. He has... different types of potato! 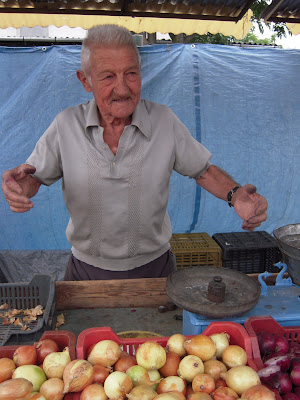 Large numbers of Bulgarians emigrated to Hungary during the revolts against the Ottoman Empire in the 19th century. They introduced specialized vegetable farming methods using raised beds, hot frame houses and irrigation methods unkown in Hungary at the time, methods which are still practied and are known as "Bulgarian" gardening. Bulgarians also introduced eggplants, squash, kohlrabi, and most of our Hungarian pepper varieties. They form a significant ethnic minority and maintain their language and position in the veggie retail trade. This guy basically fell for Fumie last year when she spoke Bulgarian to him while buying onions, and now he likes to tutor us - in Bulgarian - in the details of the artillary ordinance used by Bulgarian military units in WWII. You don't get chat like that at the Whole Foods on Houston St. in the Village. 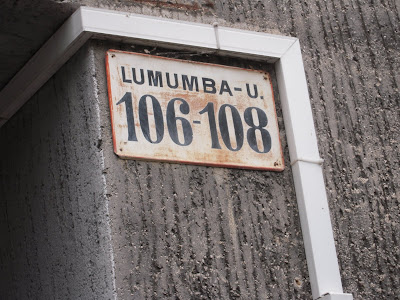 Biking homeward, we head down the former Lumumba Street. Back in 1990 most Hungarian cities went on a campaign of changing the old communist street names - gone forever were the Lenin Streets and Marx squares. Some of the more obscure lefty heroes, however, included the "Rosenberg Couple Street" right around the corner from the US Embassy, and, out here in Zugló, Lumumba Street, named for the Congolese leader Patrice Lumumba, whose murder at the height of the Cold War in 1961 pretty well guaranteed him a place in the commie street naming pantheon. Today, on Rona utca you can still see a few buildings that have never gotten around to renaming the block address markers. I kind of liked the idea of living near Lumumba Street. 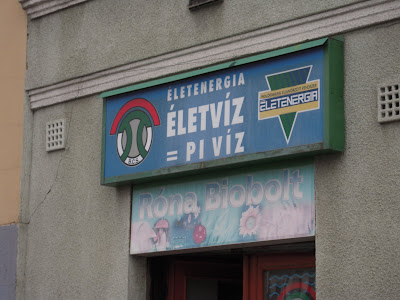 Just down Rona utca (the former Lumumba St.) I saw this shop advertising "Pi Viz." I'm not sure what that is, or why one would open a shop to sell it, but in my warped bilingual mind it says "Pee Water." Something to do with "Life Energy / Life Water = Pi Water." Obviously somebody is making a killing selling water. I just thought I should mention that. 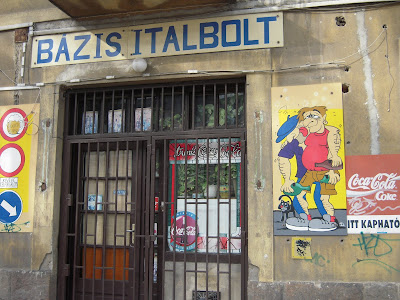 For another offering of life energy water, just around the corner is the "Base" drink shop. This is a classic example of a Budapest Booze dispensary - no frills, nothing fancy, not much in the way of fine bordeaux or Danish Aquavit or single maltwhiskies from the Gaelic speaking outer Hebrides. This is basically a dirt cheap cash and carry for drunks who don't want to pay the minimal markup to drink in a bar - just booze away in the parking lot next to the market. The sign is a good example of clear, direct advertising. Ah, Zugló, beautiful Zugló... always a pride of place and a home for everyone! 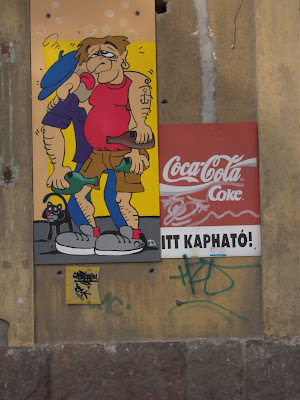 I enjoy reading your blog about all your travels in to the remote corners of Eastern/Central Europe. Then you set your sights on the neighborhood that we both share, Zugló, while I'm away in the Del-Alföld and it is as insightful as ever, even if I do come across a couple of things what you feature, especially the Bulgarian onion seller in the market who routinely embarrasses me when he loudly trumpets how to utilize his product to promote virility. Amazing that Rona was once Lumumba utca! That name betrays the somewhat lack of worldliness of our modest environs. Cheers to you for letting your readers know a bit about our frequently overlooked district of Pest.

I recall seeing weathered, peeling street signs for "Rosenberg Házaspár utca" alongside the new ones - Hold u. - as late as 2003. When I looked again last week, they were gone.
Jim T.