The great blind fiddler of Gyimes, János Zerkula, passed away last week at the age of 81, and tomorrow, May 9, he will be buried in the cemetery of his home village of Gyimesközéplok (Lunca de Jos) in the Gyimes Pass region of Harghita County, Romania. His passing is a loss to the heritage of traditional music in Europe, but on a less somber note, Zerkula was one of those old time traditional folk musicians who managed to pass on his art as a vibrant and living heritage in an time when so many musical heritages are lost in the modern blare of radios and CD players. Zerkula may be gone, but his music – infused with his friendly and infectious character – will live on in the hands of the dozens of younger musicians who sat at his feet as rapt students. [Photo by Fumie Suzuki] Zerkula was one of the last generation of old style Transylvanian Hungarian Gypsy folk fiddlers whose archaic style and repetoire helped young musicians from Hungary revive their folk music during the “Dance House” movement of the 1970s, alongside another Gyimes fiddler, the late Mihály Halmágyi. These two musicians were among the last generation of professional blind village musicians whose life spanned a period during which the stubborn mountain culture of the Szekely Hungarians of Gyimes (usually called Gyimes Csángos) struggled to maintain their distinctive local identity as the world changed rapidly around them. The distinctive music of the Gyimes Pass was one of the strongest expressions of their unigue geritage, and it was fortunate that folklorists like György Martin and Zoltan Kallos recorded them during the 1960s. By the time they were “rediscovered” in the 1970s and later, Zerkula and Halmagyi became enthusiastic teachers of their rough and difficult fiddle style to a new generation of musicians. Thanks to the work of people like folk dance researcher Ferenc Sára over the last decade, a lot of local children from Gyimes had been learning from Zerkula, ensuring that the tradition lives on. [Photo by Bela Kasa] 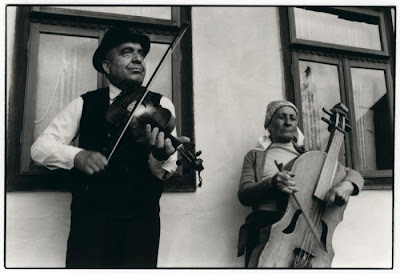 With the passing of the older generation of folk musicians we hear a lot about “the last of the line” “end of the traditional” and I would have to say that is simply not true. Yet, at least. In Gyimes – a string of mountain settlements strung along several steep valleys in the high Carpathians between Moldavia and Transylvanian plains – there are still a living tradition of village fiddlers. Zoltán „Finánc” Antal is still playing, probably the last of the old blind fiddlers in Gyimes, and there are some others, neither blind nor old nor Gypsy. [Photo by Fumie Suzuki] 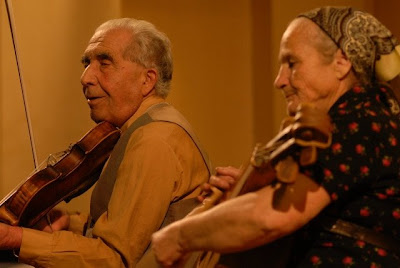 The music of Gyimes is always played as a duet – a fiddler playing lead with his wife accompanying him on the gardon, a string percussion instrument carved from a wood in the rough shape of a cello. The gardon is hit with a stick, while the one outside string is plucked – essentially it is a drum and plays the role that the large davul or tapan would play in Balkan and Turkish zurla music. The style is unique to the area – besides Gyimes, only a few Romanian villages near the Bekas Pass use the gardon. 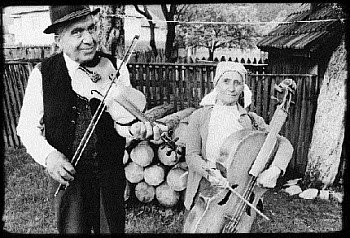 To be honest, Gyimes music is not exactly my cup of tea. It used to be some of my favorite music, and back around 1990 it was the in thing among fiddlers learning from Csaba Ökrös, and you gotta admit – it is hard to conceive of a style of fiddle more attractive to somebody who really wants to get a wild rocking sound out of an east European fiddle style. I wound up spending several years learning as an apprentice to a fiddler from the Transylvanian lowlands around Cluj, however – the late Ferenc Arus from Méra – who taught me a lot about the aesthetics of his style of Transylvanian fiddle band music. Basically, that is what you learn if you apprentice to a Gypsy primás - folk aesthetics - their system of what is "good" and what is not, and it isn't something that they take to be a relative value. The old primás of Szék, Adam "Icsán" István used to say "What's good is good" Ami jó az jó. Simple. [Photo of Arus Béla and Arus Ferenc by Bela Kasa] 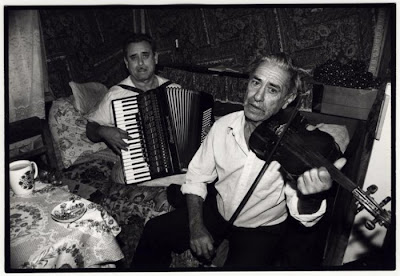 Whenever Feribacsi would be at some dance house or folk festival in Budapest and hear Gyimes music, he would simply lose it. “How can they call that music!” he would fume… “Some guy sawing on a fiddle and his fat wife whacking on a log… and they call that music?” It was, however, my job to agree with everything Feribacsi said, and eventually the prejudice against whacking musical logs stuck with me. I lost my ear for the stuff. To this day I tend to go out for a drink when the dance cycle switches to music from Gyimes. But then, I don’t exactly have much patience for the music of Szék, either. Most Hungarian fiddlers wouldn’t share my enthusiasm for the rough hewn Romanian mountain fiddle style of Maramureş, either. Heck… to each his own. But nonetheless, I’ll miss Zerkula. Good, honest fiddling is simply irresistable to me, even if it requires whacking on a log. While a lot of Hungarian revival fiddlers tend to play Gyimes style as an expression of unbridled fiddle wildness – “look how loud I can play this thing!” Uncle János always kept his playing within the strict bounds of taste – careful fingering, expert bowing, dances played at the proper tempos, nothing just for show-off. The man was a class act. [Photo by Fumie Suzuki] 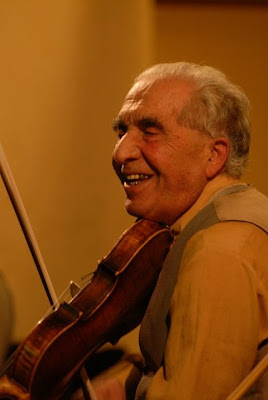 Uncle Janos was a great character, always happy to chat about fiddling, and unlike a lot of fiddlers, never too pushy about asking for a few forints tip. He lived a tough life – lost his sight at the age of twenty, and trying to make a living as a blind fiddler in one of the poorer mountain regions of Romania is no picnic. "Nem kell látni, érezni kell!” - “You don’t need to see… you need to feel it!” he used to say. He managed and built up a decent farm and was one of the few rural Transylvanian musicians who was capable of adapting to a new role as a teacher of folk fiddle and festival performer later in life. They won’t be making many more like him. Here is a clip of Zerkula and Gizi néni (the gardon player Pulika Gizella) playing last year at the Budapest Palace of Artists. 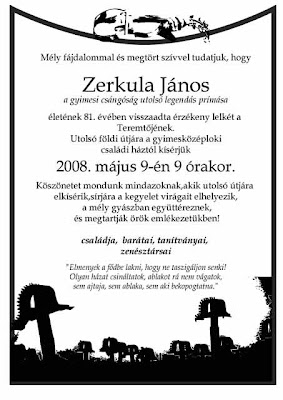 A wonderful post, and it sounds like he was a wonderful man in his way. I came to live in Cluj with a love of both Romanian and Hungarian folk styles (and an awareness, from my admiration for Bartok and his ethnographic work, that the two were often more mixed up than people imagine). I'm married to a Romanian, so I have to make an effort to get exposure to Magyar culture. For some time I've wanted an excuse to go to Gyimes (and indeed to Szék), so if you know of any festivals there or other ways I can hear the music, please let me know. Thanks.

Hello, my name is Adam Costel, glad to see that someone is interested, and simultaneously praise the work life of these wonderful people fail to give someone who is interested in these people who unfortunately passed year nothingness, ami really sorry for what I've got to know, though their nephew wanted all year deauna let everyone know their story of life as I know, but you do not know the general public, their nephew natural , and grandson of Halmaghy Mihaly, and Adam Ghizela, I'll explain how, in his youth Ghizela Adam gave birth to a son named John, made ​​with Zerkula Ianos he wanted us to recognize it was passed resulted baby's name Adam Gisela married later and therefore I am the son of John, grandson of both families, being at an early age I knew only Halmaghy family, I remember often going year holidays at my grandparents, I haven Vac year, I remember the hills anverzite around their house and sing their songs over and over year home who were violins hanging year we wanted even touch them, over the years my father inherited from his grandfather Halmaghy violin is called STAINER, I bring remember, hardly gave violin crying, saying, due to take are alive today, and ate bread with him, tears or spilled on the violin, that I saw, and now that feeling overwhelm me tell you, that violin now it is to me, and I'm thinking to give anyone

Which would have the same respect, I write all this that do not know who to speak to, and know that their life has not been said yet occurred, there were some decent people with fear of God, though going in many countries and NOT MUSIC they wanted and did not lead a life of luxury, old story that life ALWAYS SHOWER camps, if you know more or just talk; WWW.COSTEL_ADAM81 @ YAHOO.COM THANK YOU.

GADJO DILO, go to www.folkradio.hu !!!
eveyday program until you'll be bored of lol :)))