It feels good when the New York Times takes a moment to remember some of the unsung heroes of the city. During World War Two the US Coast Guard had the job of protecting New York Harbor. Seymour Wittek is one of the last of the men who risked their lives during the little known El Estero incident in 1943, and in doing so he helped divert a disaster that would have, literally, torn New York City apart. 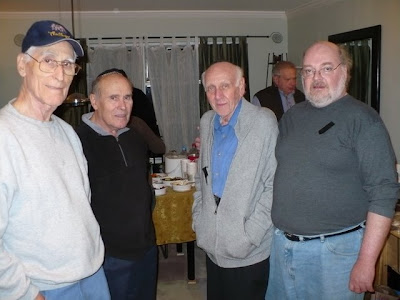 The New York times has a story today about the El Estero incident in New York harbor during World War Two. My sister's father in law, Seymour Wittek, served in the US Coast Guard in New York harbor during the second World War and is one of the last survivors of the team that, literally, saved the city of New York from the danger of an exploding ammunition transport ship. Seymour is standing second from the left (wearing the grey jacket), next to his son, Dr. Alec Wittek, my Uncle Eli Cohen, and my father Jack Cohen (this photo was taken on the final day of sitting Shiva for the late Anne Wittek - hence the black mourning ribbons. She was a wonderful woman and a living treasure chest of Yiddish folk songs!) Writes the NY Times: "For Seymour Wittek... there have been other significant days over his 87 years... One October day last year, death claimed Anne Wittek, his wife of 64 years. That was a most important day. But for altering his life, April 24, 1943, stands out. [photos of US Coast Guard supervising the loading of bombs onto transport ships during World War Two.] 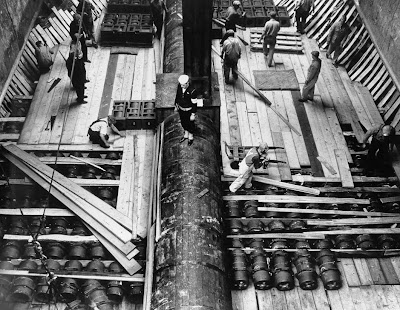 "That was the day in World War II when a fire aboard an ammunition ship in New York Harbor threatened to cause a gigantic explosion that could have cost thousands of lives and destroyed swaths of Lower Manhattan, Brooklyn, Staten Island and the New Jersey ports of Jersey City and Bayonne." 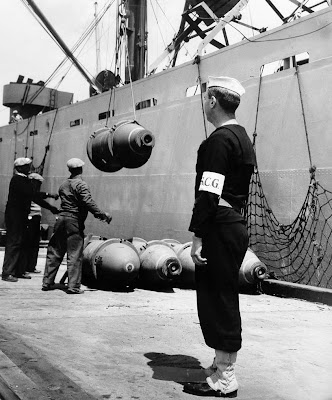 "That April day, his detail had just finished stowing roughly 1,400 tons of explosives on El Estero, a freighter of Panamanian registry docked at an Army loading pier. Other ships with the same type of cargo were tied up nearby. On the pier sat railroad cars similarly loaded. In all, an estimated 5,000 tons of bombs, depth charges and small-arms ammunition were concentrated there. As evening approached, the Estero caught fire. Oil had leaked into bilges under the boiler room and ignited. The fire threatened to blow up the freighter and then, in a chain reaction, the adjacent ships and railroad cars. Not far away, fuel storage tanks in Bayonne and on Staten Island were in jeopardy as well"An officer announced that he needed volunteers to board the burning ship and man fire hoses. The freighter’s deck and its holds were becoming perilously hot. “Nobody looked left,” Mr. Wittek recalled. “Nobody looked right. Nobody looked backwards. The men that volunteered all stepped forward — immediately... Standing on the ship’s decks, Seaman Wittek could feel the heat through the soles of his shoes. The fire was beyond control... In a race against time, tugboats towed the Estero to deep waters in Upper New York Bay. Coast Guard and New York City fireboats pumped water into the cargo holds. Not quite four hours after catching fire, the Estero sank to the bottom." 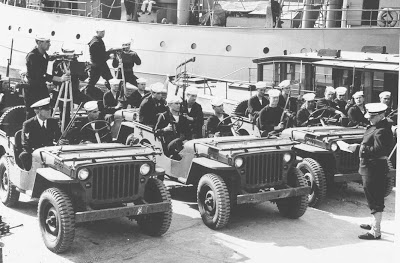 The danger can be estimated by comparison with the Halifax Explosion on Thursday, December 6, 1917, when the City of Halifax, Nova Scotia, Canada, was devastated by the huge detonation of a French cargo ship, fully loaded with wartime explosives, that had accidentally collided with a Norwegian ship in "The Narrows" section of the Halifax Harbour. Approximately 2,000 people (mostly Canadians) were killed by debris, fires, or collapsed buildings, and it is estimated that over 9,000 people were injured. This was the largest man-made explosion until the first atomic bomb test explosion in 1945 and is still one of the world's largest man-made, conventional explosions to date. A picture of the Halifax mushroom cloud can be seen below. 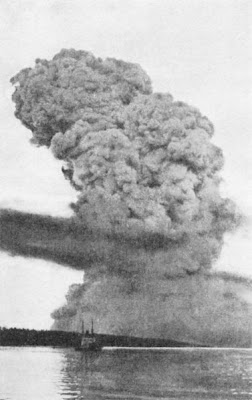 The generation that fought in WWII are becoming fewer and fewer, and these lesser known actions that make up the heroic whole deserve to be acknowledged. Seymour: Abi gezunt!

What a great story. He must have often had grandchildren etc around him begging him to tell it over again! I didn't know about this incident. Truly the freedoms that we enjoy are due to cumulative acts of bravery like this.

Please let Mr. Wittek know of the profound gratitude we felt when we read of his heroic deeds in the story written for the May 27, 2008 NY Times.
Regina and Roger Gradess, NYC

This is interesting. Unfortuneately, there isn't any mention of my father, James McManus, Joel Beckwith, or Commander Stanley the Coast Gurad officers who led the volunteers during this disaster. My father and Commander Stanley were the first men on the ship and the last two off it. My father commandeered the tugboats and summoned the fireboats that scuttled the El Estero, and no mention of the denial of my father's Navy and Marine Corps medal. After having an army colonel "colorfully" point out that the Caven Point docks were irreplaceable as the only facility for loading heavy bombs on the East Coast, Commander Stanley and my father made the decision to move the El Estero out in the harbor and scuttle her.

Jimmy M said...
This comment has been removed by the author.
7:06 PM