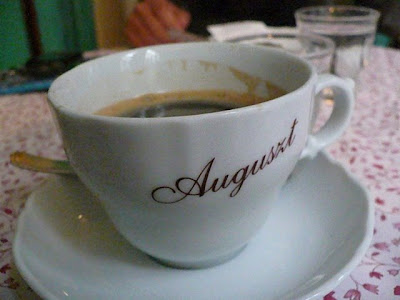 Say you are slogging about downtown Budapest on a busy afternoon, and the caffeine and cream cake urge hits you. Now, this being Budapest, there ought to be some kind of Hapbsburg-centric old fashioned coffee house nearby waiting to serve up espressos and little cakes in a historic setting full of stuffed chairs and newspaper stands. One small problem: such places are pretty much gone. The city is full of cafes, but most are simply... bars... The old kavéhazák - coffee houses - so often touted in the tour books, didn't weather the changes of the early 90s well. Most closed, or were turned into snobbier, pricier Disney-Monster coffee houses. The Mother of All Neo-Nostalgic Kitsch coffee houses is the famed, and recently re-opened New York Kavéház, located near Blaha Lujza square. Laughably elitist, and priced to match, the New York is worth nothing more than a peek inside and a hasty retreat. In a brazen attempt to win the Bad Taste Hungarian Tourist Trap Culinary Award the New York actually serves something called paprika coffee (chili oil floating on a cup of coffee... at least the waitress had the mercy and good taste to tell Fumie not to even try it.) The Lukás coffee house - on Andrássy - is actually located inside a bank, and no, nobody actually goes to this bank for a cake and then walks out and tells about it. The Hauer? Oh, let's not even start on the Hauer's legal battles - imagine if the leadership of North Korea suddenly wanted to get involved in the Hungarian pastry business! Perhaps the last old, honest coffee house in Pest is the Auguszt Cukrászdá, located in a courtyard behind a non-descript entrance near the Pushkin Movie Theater in downtown Pest at Kossuth Lajos u. 14-16 (open weekdays only, 10 am - 6 pm.) 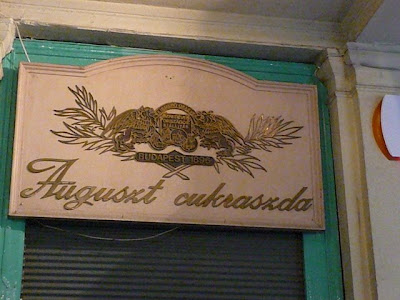 The Auguszt, in operation since 1970, is almost an anachronistic anomoly, the place to go if you want really fine traditional cakes at normal prices. Your other option for these is the Perity bakery on Vaci ut near the West End City Center, but there you have to stand up and fork your cakes down standing in the corner facing the wall, as if you had done something bad in class and Teacher was punishing you during cake time. After a busy, noisy, maddening day in the unholy, smoggy mess that is downtown, the Auguszt is an island of quiet in which to rest for a spell. 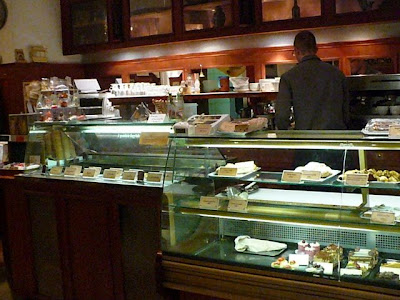 All the cakes are excellent here, but if you need to know, the Auguszt is the last bastion of the classic Hungarian pastry known as the krémes. Krémes are simply vanilla cream cakes encased in flakey pastry with a dusting of powdered sugar on top. Something so simple, however, is prone to bastardization, and most of the krémes you find around Budapest use some kind of gelatin in their cream. Not so the Auguszt. This is the same krémes that my grandparents knew. And it is so good, that if you go there after two in the afternoon, like we did, you are not likely to find any. 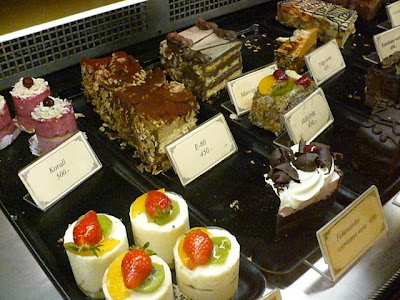 It's not like that is any great tragedy. Everything here is about two Euros... and fresh. But really, go early and whatever else you do, get the krémes. If you are in New York, go to Katz' Deli for the pastrami sandwich. If you are in Budapest, go to Auguszt for the krémes. 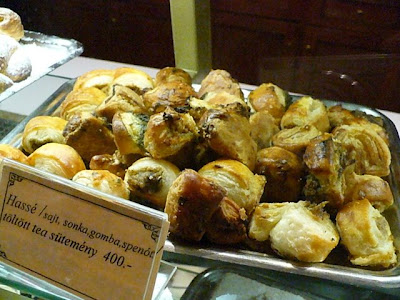 Now, here's a dirty little secret about Budapest pastry houses: whatever you eat there can count as a healthy meal. Just eat two or three cakes. Every day thousands of elderly Budapest grandma types in fancy purple hats devour multiple cakes and call it a well balanced lunch. And if you really need some kind of lunch excuse, go for this: flakey puff pastry stuffed with cheese, ham, mushroom, and spinach.
Posted by dumneazu at 6:53 PM

I have also found Auguszt. It is hidden away in a little court, but it is definitely worth to find. It is like an oasis in the busy downtown of Budapest. I felt as if stepping back in time. Old chandeliers, wooden carvings, little marble tables. Quite a lot of people were there at the time of my visit, they all seemed Hungarians. The lady, who served them seemed to know them each, and had a few words with all of them. To my inquiry she told me, that she was the fifth(!) generation, who is continuing the family business, almost everyone in her family is a pastry cook, they have been baking cakes, for a 130 years now. Impressive! I tasted the E-80 cake she recommended, which was delicious. She told me they first made it for her grandfathers 80th birthday! If you want to see tradition in the making or just have a half an hour to pass in the downtown of Budapest, don’t miss Auguszt!

There is another Auguszt behind the Mammut mall ( I think it's a bit bigger). And what's wrong with the Europa?

Is the Lukacs still there? What do you mean, a bank? What about the Muvesz and Astoria, and the standing-up one at Oktogon?

蔥爆牛肉Vivian said...
This comment has been removed by a blog administrator.
9:05 PM