Coming home to Budapest always has some hidden surprise, not always fortunate. After arriving, I heard that the táncház ("dance house," literally a folk dance night) at Almássy ter on Thursday evenings is now over, cancelled due to new ownership of the building. Budapest has always had a culture center in each district, dating from the communist era, but since 1990 these have been struggling to survive mostly with little success and even less municipal support. It's a shame, since they actually tend to serve their communities as everything from senior centers to concert venues, but none has ever really become profitable and over the years many have become run-down. Almássy ter was the exception. This effectively knocks out my favorite mid-week nightlife activity - hanging with my musician buddies at a traditional folk dance that attracts over five hundred sweaty dance fans a night. The dance was conducted in two large halls, one for Transylvanian string band music, and one for Moldavian and Gyimes music, always to live bands and always stretching until the wee hours of the morning. 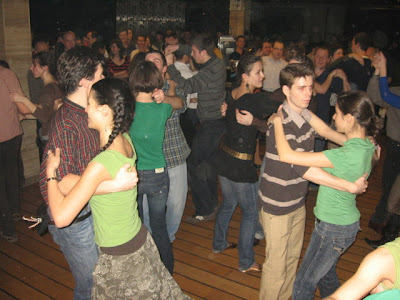 The only other decent táncház happening would have been over at the Fonó Budai Zeneház, on the far side of Buda in the depths of the 11th district. I like the Fonó, but it is a haul to get thas nosy neighbors who shut down the music after 11 pm, when most dances are just getting warmed up. Then the news arrived that the Gödör klub located undergound at the park in Deak ter would be having weekly dances on Thursday evenings, without an admission charge, just like the Almássy ter táncház. And on opening night the featured band would be the village band from Palatka, my favorite band from central Transylvania. 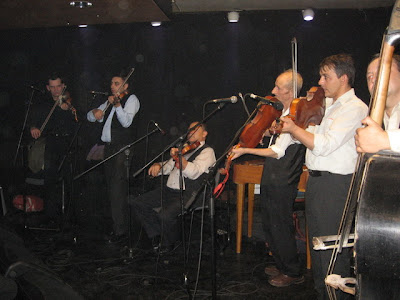 Palatka is built around a core of relatives from the Kordoban family of Gypsy musicians, and in their heyday the Hungarian folk revival musicians depended on this band for much of the source material and dance repertoire that made up the tanchaz revival. The music in Palatka maintained a wonderfully archaic sense of harmonics - instead of using minor chords, the band would harmonise everything modally using major chords. Combined with the double lead fiddling in which the bowing was perfectly in unison and a taste for trills slowed down to psychedelic wah-wah pedal speed, Palatka is one of the most starkly moving bands I ever heard. 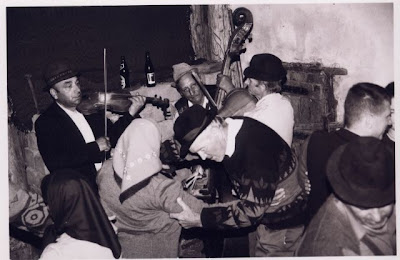 The original fiddlers, brothers Bela and Marci Kordoban. Bela - who was reknown for his healthy appetite, being able to put away 28 stuffed cabbages in a sitting - passed away in 2002, after a concert in Veszprem. 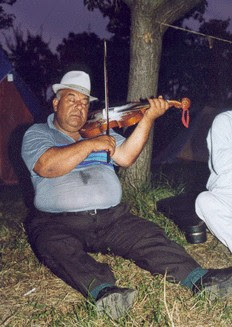 Marton, who was a good friend of mine and from whom I learned to play in the style of Palatka, died tragically after playing at a folk dance camp in 2005. He fell off a ladder that lead to the musicians' sleeping loft and hit his head. 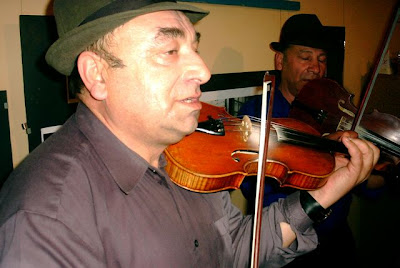 Marton's son, Florin, stepped in to take the role of lead fiddler, while their brother Lörinc moved up from playing kontra fiddle to become the defacto band leader.

The Csürrentő band played Moldavian Csango music in the large cement hall in the back of the Gödör klub. The term Gödör refers to a ditch, a hole in the ground. Back in the 1990s the then socialist governemnt had tagged the ugly parking lot at Deak ter for a new National Theater. After winning the election, the incoming FIDESZ government, in a characteristic fit of anti-Budapest petulance, stopped the construction of the new National Theater and left the site as a hole in the middle of the city for four years. Hence... the ditch.
The Gödör Klub is what remains of a once ambitious plan to expand the Metro station at Deak ter, which seemed to have met its end due to bad planning when the area turned into a flood zone and... oh, well, things in Hungary go this way. So we have a bar instead of a new central Metro station. At least we now have a would-be central metro station that serves as as a Csango dance venue...
Posted by dumneazu at 5:22 PM