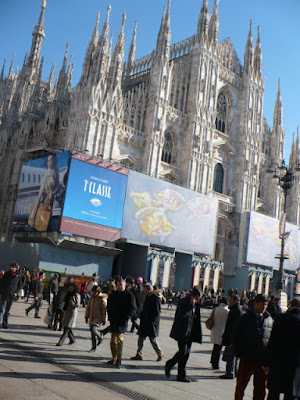 We are in Milan, Italy's least lovely city, but the one where everybody works so hard that they really value their leisure time, and they are some of the most open folk in the old boot of Yurp. It's the last week of Carneval in Mailan - they follow something called the "Ambrosian Rite" of Catholicism, which at any level means less days of fasting before lent, and so we are here while the shops and stores are busy offering bad Catholics everything their heearts could wish for. 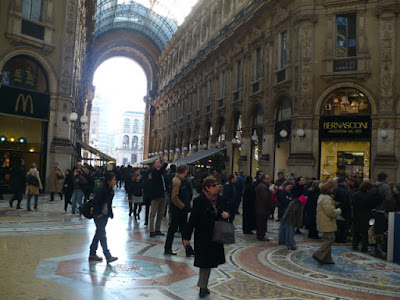 Milan is Italy's richest city - home to a lot of the big italian industries, not to mention the fashon Mecca of Italy. People here don't just toss on a jacket and head out into the ild winter weather... they seem to spend hours coordinating outfits, rejecting out of date looks, and - if you are a teen age male - making sure your pants hang so low on your ass that it seems to be a battle between gravity and crazy glue that keeps them up.

Everywhere you go there is carneval food... especially these flat flakey fried bread things covered with powdered sugar, for sale just about everywhere during carneval. 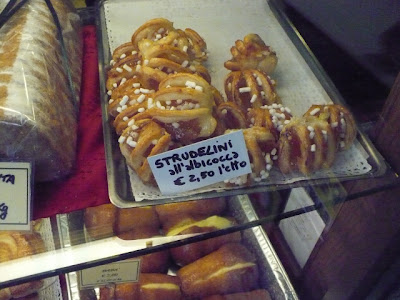 As we walked around Milan, every other bakery seemed to pull us in as if by magnet. You can have a cream filled pastry, o maybe a slice of pizza, or some amazing apple cakes... or... it gets hard to choose, as well ast to say no. Hell, we are in Italy, and only for a few days, so let's try everything. Eating on the run is a ot cheaper than sitting down to a slow restaurant meal, and since Milan is the stereotypical workaholic city of Italy - they don't take time out for a siesta during the afternoon - the things you can eat while on the run are usually damn good. 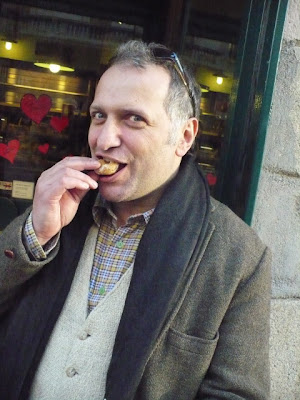 Our man Igor used to run the Jewish radio broadcast for RAI Radio in Milan, and now spends his time chewing on cream filled fried dough balls. It's a living. He suggested we head down to the Navigli neighborhood for evening grazing. 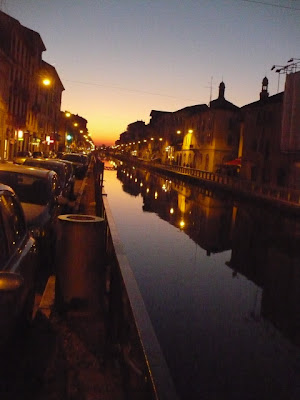 Navigli used to be the run down area of Milan, crisscrossed by canals that hauled barges of sand into the city for construction. today it is the hip night life district, full of bars, restaurants, and gift shops that serve the after dark crowd. Right by Porta Tichinese station is a market area, and in front is a well known fish market offering freshly fried fish. Igor splurged on some squid, and the two chefs offered their skills as Japanese translators. 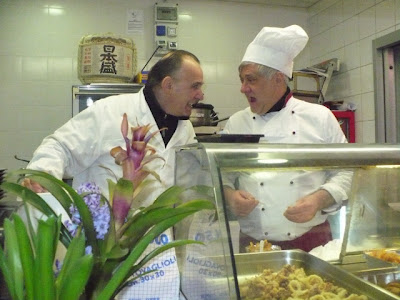 For good measure they tossed a couple of special skewers of shrimp and squid in on top of our order... 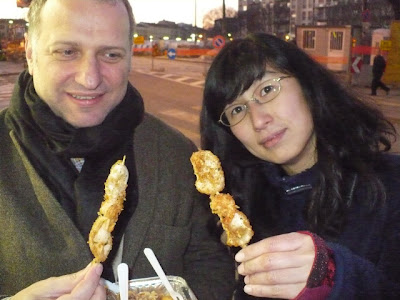 Wandering a bit farther down the canal, we stopped for some aperitivi. The Milan tradition - dating from as far back as the 1980s - has been to offer a "happy hour" of free food as appetizers with the price of a drink between 6 and 9 pm, the dead hours before any self respecting Milanese goes out to eat at around 10 pm. Aperitivi Milanese has become a kind of secondary meal in itself. We began with the classic Milanese cocktail, the Negroni - gin, campari, and vermouth. 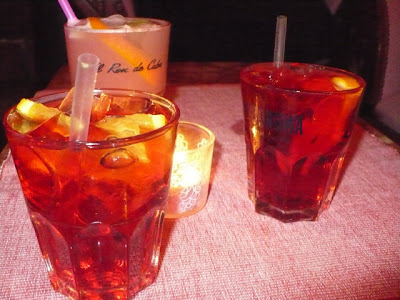 A drink entitles you to the buffet.. which at the Big Pig Bar was a modest affair, but just right for the job at hand. 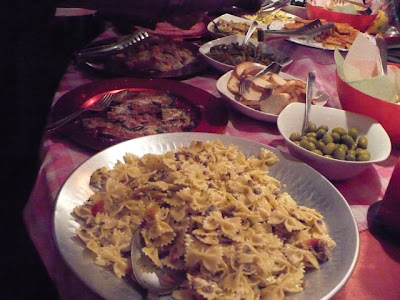 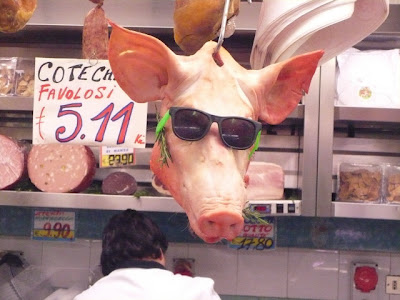