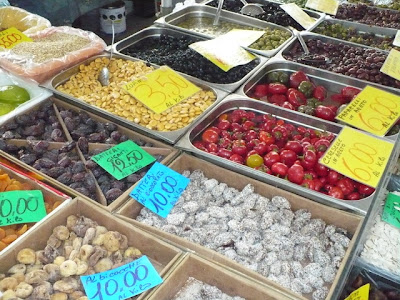 Just a slight reminder of why Italians eat better than you do. In Milan markets are held around the city on straggered days in different neighborhoods. Vendors in trucks bring fresh local produce, fish, and meats and sell in the open air markets. Of course, you can buy anything in a supermarket, but if you want to hunt around for that special local pecorino cheese or a home made Calabrian salami, your best bet is buying it out of a truck. 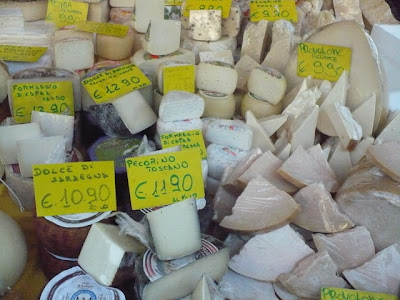 Cheese, glorious cheese! Personally, I like pecorino, or anything that smells of sheep or goats. Fumie, however, traveled through Mongolia and western China once, and so she can't really stand any sheepy flavors anymore. She's a parmesan type of girl. So we got one of each. 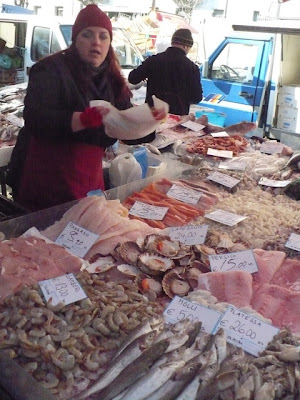 Most people buying fish will look for the open air markets. The coast is an hour and a half away towards Genoa, so some of these babies were swimming in the sea a few hours earlier. 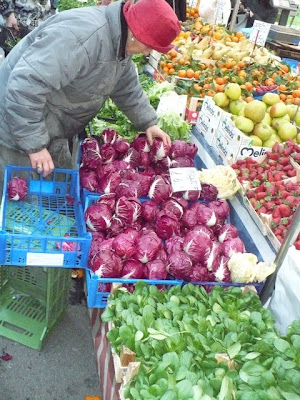 Classically cute old lady handling the vegetables. You know how vegetable sellers get when you start poking at their lettuces with your filthy, unwashed hands. Once you get old and cute they don't dare tell you to back off. 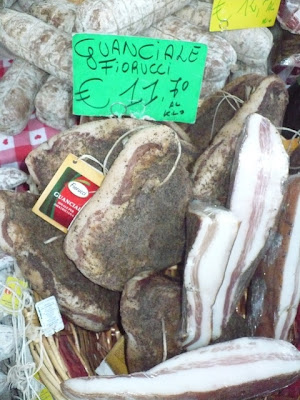 Guanciale is smoked pig's jowls, and is one of the great unknown ingredients of the Italian kitchen. It actually specific to the area around Rome and is kind of rare in most places in Italy. So this was the basket of artisanal guanciale that I scored my kilo slab from. Guanciale is used like bacon in recipes such as pasta carbonara, and it really is not a spaghetti all'amatriciana,unless you make it with gunaciale. Most recipes substitute pancetta for it, but once you try the original with pig's cheeks you never go back. Until you run out of pig's cheeks. The fat.... oh, Lord, the fat... it just melts from the heat of the pasta. You hardly have to cook it. My fellow Jews, take my word, stay away from this stuff, please! I could not resist... don't make that mistake! (which leaves more for me....) 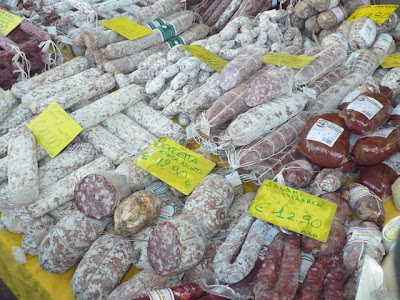 This presents a special quandary... which salami to choose from. In a more perfect world, I wouldn't have to choose. I would just buy the whole truck load of them and hang them up in my living room above my computer, where I could just reach up and slice a bit off of one while I am working... 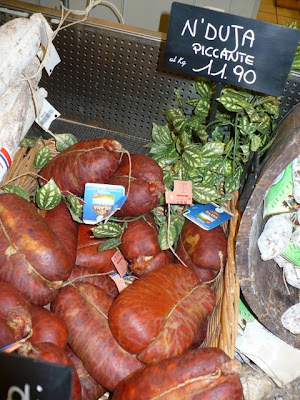 N'duja is a special salami made in southern Italy, especially Calabria. Essentially it is spiced sopressata salami meat stuffed into a bladder and smeared on bread raw. It rates a four chili pepper on the hotness scale and is something you will probably never see sold outside of Italy. The dialect term N'duja is a subtle linguistic morphing from the same latin root word as the french andouille, but there is nothing subtle about this bit of pig meat. 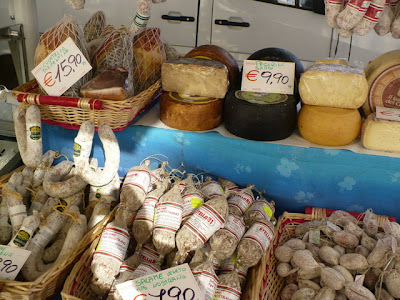 Most Italian pork products were not cleared to be legally imported into the United States until a few years ago, and while the US has a long tradition of Italian butchers who prepared prosciutto and sausages for their own local markets, it is pretty safe to say that most folks in the US, or anywhere ouside of Italy, really know just how amazing the variety and quality of real Italian salamis can be. Which is a crying shame. For years I have been trying to get my brother, Ron, who is a noted chef in California, to get his butt over to Europe and try some real Italian food. When he finally does decide to come... guanciale for everbody!!! 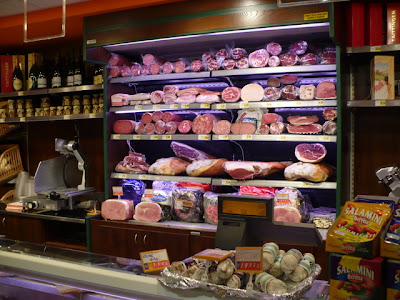 You sound like someone who is going to have a strong opinion about sausages - post your nomination for the world's best (or at least your favourite) at www.discoverunearthed.wordpress.com - there have got to be a few Italian contenders...

I'm moving to Milan in 2 weeks and have been dying to put together a list of open air markets like the ones you pictured...can you tell me anything about where and when they are? thanks so much! - Lily
Styles.lily@gmail.com