Coming home to Budapest in the middle of a perfectly rotten January - howling winds, rain, grey days - has led to a drop in my blog posts, not to mention the horrible cold-turkey withdrawal symptoms that come with lack of access to cheap Fukien Chinese and Korean food. This week I had the pleasure of heading out to Obuda to do some studio editing on a track our band recorded for an upcoming CD compilation... Obuda used to be a picture perfect urban village, full of funky old shops and garden restaurants. 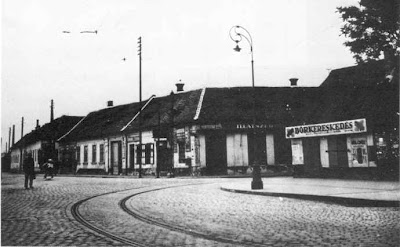 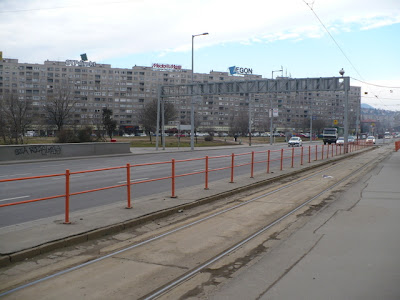 The largest single residential housing unit in the world, built by the East Germans in the early 1970s when the city of budapest decided that the Schvab garden resturants with their fish soups and shramli bands had to go to be replaced with cheap worker's housing. 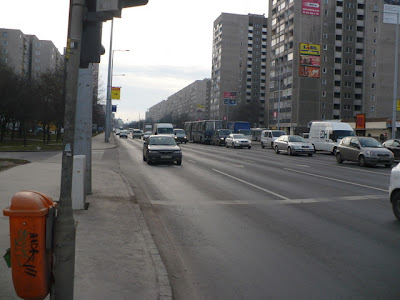 Of course, this being Budapest even the drabbest parts of town have their eye-popping surprise features. How about some Roman ruins, such as these at Florian ter, just across the way from the East German Mega-Residence. 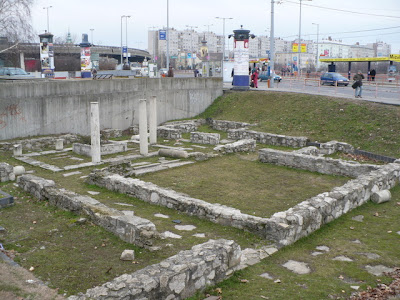 Winter shopping in Hungary means... cabbages and meat. I had to make some dinner this week and went into Moldavian Jew default mode: mamaliga with mushrooms. Mamaliga is the cornmeal porridge eaten by most of rural Romania at any given meal, usually served in a big iron cauldron accompanied by a bottle of tsuica, like this one in Maramures... 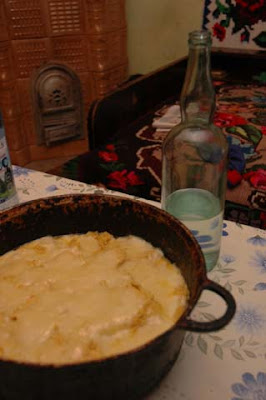 There is no better winter food. Perhaps no better food in general, unless you are Asian (... japanese?...) and like rice. As for me, mamaliga is cheaper than mashed potatoes, faster to prepare, and goes better with cheese or mushrooms. My father was raised eating mamaliga mit kas un piter, (Yiddish: with cheese and butter) cooked by my Grandmother who was from Teleneshti in Bessarabia. When I am home I like to cook it up for him... 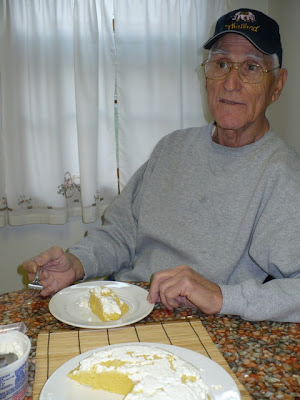 As for myself, I peeked into the pantry and found the needed ingredieants. Cornmeal, fresh mushrooms, and some dried wild mushrooms I brought from the Hackensack Costco in the US. Usually I get my wild mushrooms from my Moldavian folk music buddies here in Budapest, who are all fanatic - and well trained - mushroom hunters. If they can eat them and live, then so can I. Otheriwse, Costoco sells these huge towering plastic conatiners of dried morels, pocinis, and chanterelles for peanuts comapered to their fair marlet price so I brought home a jar. 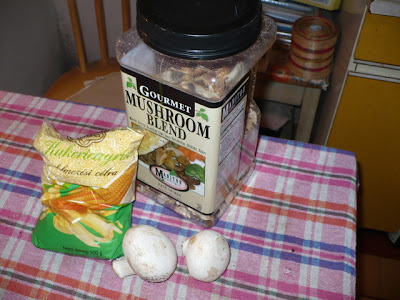 Mamaliga is a lot coarser than Italian polenta. Polenta actually makes me gag. It's way too fine and baby-foodish. Go for the coarse ground corn meal, boil it up in some salted water with a bit of butter, and then after fifteen minutes pour it out into a concave soup plate greased with some butter and perhaps cheese - in this case Slovak sheep bryndza. After twenty minutes of cooling you can invert it onto a flat serving plate. 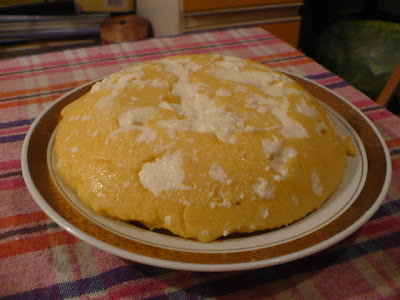 We made ours with sauted mushrooms - sliced fresh champignon mushrooms, a bit of soaked wild mushrooms and their soaking juice. Made a flour and oil roux to what the Cajuns would call a "dark peanut butter roux" and added the shrooms, seasoned with black pepper and a slight hint of nutmeg. Heaven on a plate. 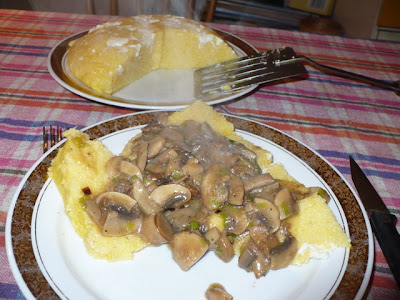 In early February Fumie and I are taking advantage of a special sale she found on the Whizz Air website to fly to Milan to visit our friend Igor... for free. All we pay is airport taxes and we're in the fashion capital of Italy - during February sale month - where the local food tradition is the happy hour. Milanese bars and restaurants set out huge buffet tables at around five in the afternoon where for the mere price of a drink - usually a glass of wine or a beer - you can pig out. Apparently this used to mean a small snack, perhaps some pizza or cold cuts, but soon grew with typically Milanese extravagance to a situation where some places put out ten different pasta dishes and a salad and antipasto spread that would put Babbo's out of business. So, yes, polenta... pehaps. We will be documenting the places we hit, and we have been known to hit three or four in an evening. But until then, winter means mamaliga.
Posted by dumneazu at 6:21 PM

Thanks for the history, the recipe and the tips!
;o)
- Lee

Hmm, Thanks for the recipe...we're gonna have to cook up some mamaliga in the next couple of days. They even sell caşcaval in the market near my apartment here in montreal! You can imagine we need this type of winter food more than most...

Would have liked to have crossed paths with you on the ground somewhere between Germany and Romania, but I suspect our paths crossed over the Atlantic.

Another use for malai that was recommended to us in Bucharest before the pharmacies were as well-stocked as they are now: Spread some on a hot teppan, put your head over it covered with a towel, and let the smoke clear out your eyes and sinuses. I didn't have the guts to try it when I needed it.

Enjoy your music (CDs) and your blog very much. Any chance of getting those pics of Stroh fiddle making up. I want to try my hand at it and could use a tutorial.
Very best regards,

Loved your pic with the Mamaliga, and the VERY FAMILIAR to me tzuica bottle shape. I was brough up in Timisoara (Temesvar as known to Hungarians), and the Mamaliga (particularly with feta cheese) was a very common meal.

My parents are from Bessarebia: Zguritza and Dombreveni. My mother used to make mamaliga with butter, brinza for the fried fish. I will try to make it today. Will need to find something to supplement brinza.