Last Minute Shopping in Either Seoul or New Jersey, We Are Not Sure Which.

Today was last minute shopping before we head back to Budapest. Fumie is leaving tomorrow, I go on Thursday - we booked our trips at different times when I was planning to be on tour with Yale's Band, and so we fly separately. But first, a trip back to the Soft Tofu Korean restaurant in Ft. Lee. Seafood tofu soup was in fine form, and we ordered the kalbi grilled marinated short ribs, based on the rave reviews Fumie had seen in a local Japanese language blog about the place. These were the best kalbi we have met with so far. 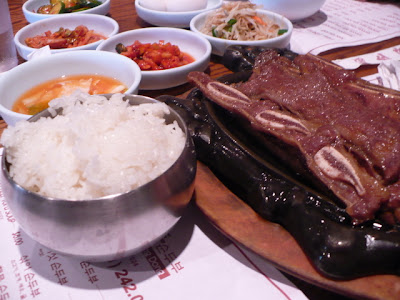 After coffee at the Parisienne Japanese bakery and cafe in Ft. Lee, we headed down to Palisades Park. Fumie loved being in New York's Chinatown because the vibe made her feel she was traveling in Asia again. Here we felt we were visiting Korea. Palisades Park is about as close as you can get to the suburbs of Seoul. It was a beautiful day to be outside - 18 degrees (that's 65 Farenheit for you Yanks) and I was warm just wearing a sweatshirt. 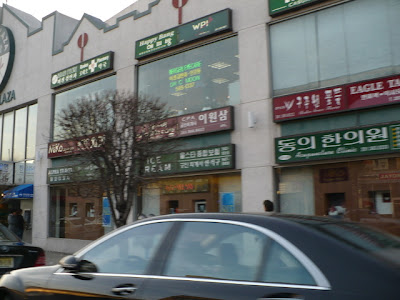 That neither-here-nor-there globalistic feeling definately strikes you when you enter the Han Ah Reum shopping mall. This is one of my favorite places in New Jersey, because Jersey has always attracted immigrant cultures, and there have always been some Jersey ethnic version of the giant market like we have at home, whether it was Polish, German, Chinese or - as now - Korean. 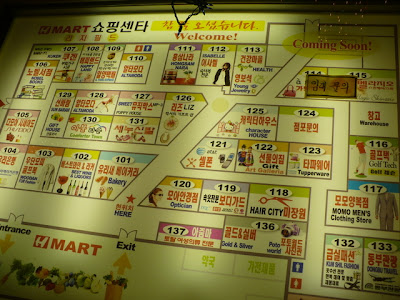 Fumie picking up a few last minute items before heading home - a lot of Japanese food is identical to Korean food, so for konyaku and seaweed, we were set... The Japanese actually have a secret craving for Korean food, since so many Koreans were brought to Japan as labor when Japan occupied Korea. They love the bold flavors, they secretly yearn for the hot pepper and garlic in rude doses, and kimchee has taken hold in Japan in the way that Indian curries have supplanted most of traditional English food in Great Britain. 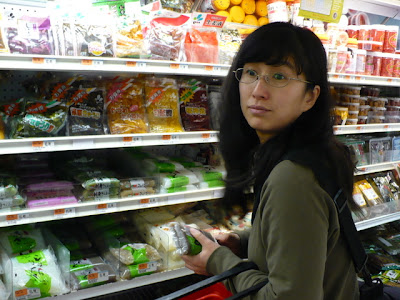 I am going to miss kimchee and banchan back in Central Europe, so I guess the only thing left to do is learn to make my own. There is Mr. Park's Korean specialty store, but it relocated to the far off and exclusive Rozsadomb section of Buda so we almost never get there. It takes time to get used to Korean food, but when you cross the border line, there is no going back. It is one of the most addictive cuisines in the world. 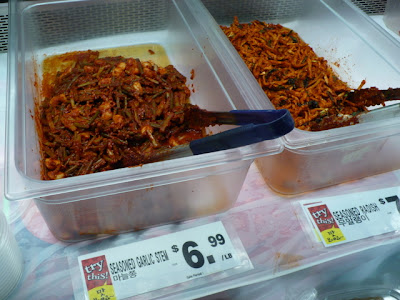 We may not have thousands of Korean markets in Hungary, but we have hot peppers and we have chinese cabbages, not to mention air-born bacteria so it is only a matter of time before I learn to rot them all together and call it dinner. Still... this may look like a lot of kimchee but after careful experiementation I can attest that one bag of this would only last about three days in our kitchen. Fumie was surprised at her own kimchee consuption rate, about one half kimchee cabbage a day. Of course, we are living in the center of North America's kimchee zone, so it is never a problem replenishing the stock.... 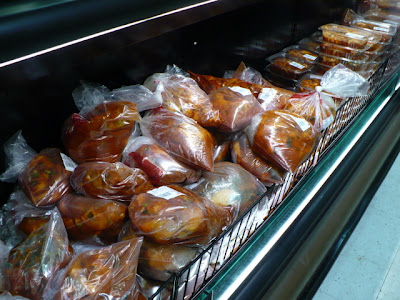 Some things you can't fake at home. Walking around a Korean megamarket makes me think back to the days of my childhood when I would never dream that people would eat fermented squid or fish guts with a straight face. Now I find myself wondering how I will be able to go without the stuff. 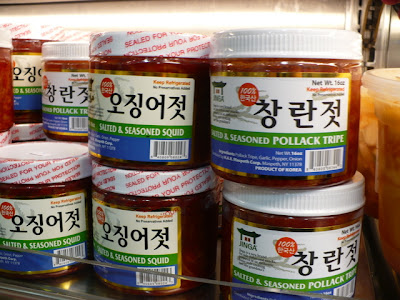 Maybe I can smuggle in some manila clams and seed the danube with them and produce igazi magyar clams... or perhaps not. Clams are not something that would amuse Hungarians, especially when they learn that we eat them still living on the half shell. Oh well, more for me! 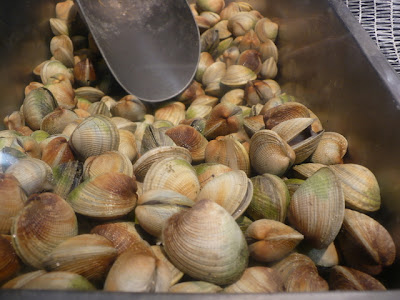 Thanks for letting us tag along on your adventures here in the States and throughout the world.
Wishing both you and Fumie safe journeys...
;o)
- Lee