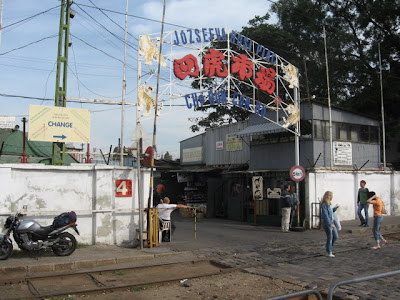 We are back in Budapest during one of the greyest, most unphotogenic winters in memory. The nation is undergoing National Hangover Month. January in Hungary seems to be when everybody who has survived the holiday season is on a temporary teetotaling regime, at least until February arrives with the promise of farsang, or Carnival, which means a long weekend of midwinter revels. As for me, I am enduring a difficult period of withdrawal from good cheap chinese food. After a couple of months in New York gorging on low cost dim sum and korean treats, I am now going cold-turkey on my favorite cuisine. Now that I have established, beyond doubt, that I like cheap chinese food my options are basically to either make it myself or to hoof it over to the Four Tigers Chinese Market in Pest. 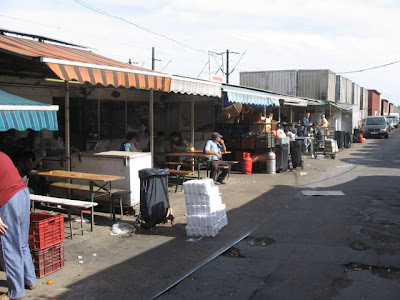 The Four Tigers Market, alias the Jozsefvarosi Kinái Piac is a sprawling complex of shacks and warehouses located in Budapest's eighth district(tram 28 from Blaha Lujza ter, entrances at Kőbányai Út 31 or Kőbányai 21 stops.) where hundreds of Chinese family businesses busy themselves with the daily wholesale and retail grind of providing cheap underwear, plastic shoes, tacky bed sheets, and crap fishing tackle to the hungry consumers of east Europe. Snuggled up next to the railroad tracks behind Keleti Station, the market is a teeming city comprised of shipping containers and tin shacks populated by emigres from China, Viet Nam, and various dodgy Central Asian locations to boot. Most of the Chinese come from around Beijing or other northen regions, such as Lang Zhou. And they gotta eat. 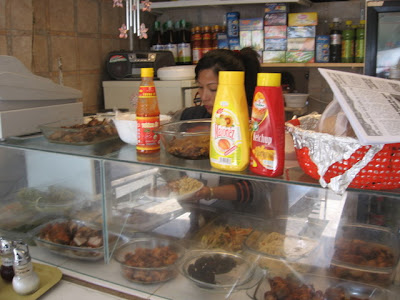 There are lunch stands located all through the market, but the best are the ones in the back of the market, directly behind the middle entrance off of Kobanyai ut. Just enter the gate and march beyond the "used" cell phone vendors and the chinese lunch stands near the entrance to the row of shipping containers in the back of the market. Yes, it looks dangerously unhygenic, and yes, you have to eat outside from grungy picnic tables, but it is good, cheap, and authentic. So what if they chop meat on carboard laid out on the ground? They do that in Sinkiang as well. 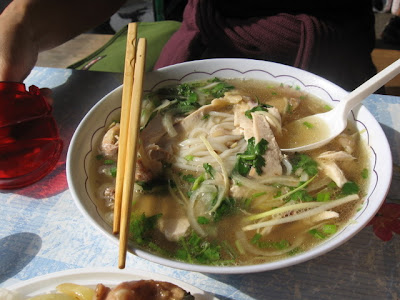 There are a couple of Vietnamese stands here which serve pho, our favorite rice noodle soup, not to mention specialties such as summer roll (in season) and iced Vietnamese coffee. But the usual drill is to simply peruse the stands until you see something you like, and then order the rice plate. This means you get a load of rice, and then start pointing at all the offerings that you want piled on top of the rice, they charge the same Ft 600 per plate regardless of how much is piled on. There is no menu, there are no single dishes to order unless you want a soup, noodle dish or dumplings - in which case it helps to know the name of your desired dish in Chinese or Vietnamese. Oddly enough, many of the temporary Romanian and Hungarian laborers here do, in fact, know how to order in Chinese and Vietnamese. For the rest of us, point and nod. 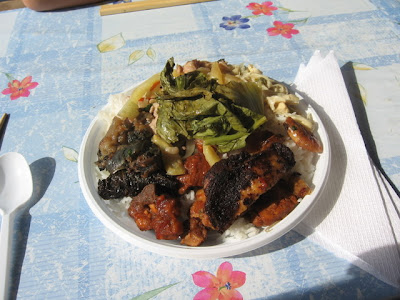 The basic rice plate: bit of spicy chicken, some pork ribs, some pork belly, stir fried vegetables, steamed cgreen vegetables, and in my case probably a bit of crunchy sliced pork ear hidden into the mix. Usually a fried hardboiled egg is in there, and maybe a bit of fried sardine. 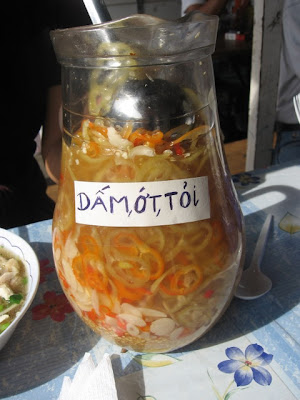 Pepper, vineagr, and garlic sauce to keep things happy. This is best in soup, but there is usually some straight hot pepper paste around as well, and always a squeeze bottle of Sriracha sauce. 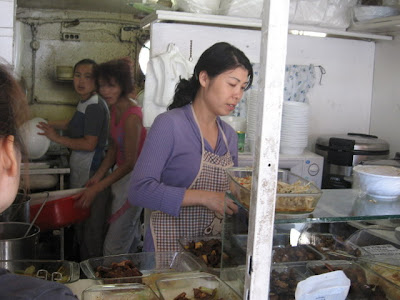 The Dumpling Lady. The northern Chinese like dumplings - shiu-jao - and this woman has had the dumpling market cornered for several years. At Ft 500 a plate of ten, they keep the market warm and fed in the cold season. Best eaten with a dipping sauce of black vinegar and hot sauce. There are also spicy noodles and cold noodles in the summer. 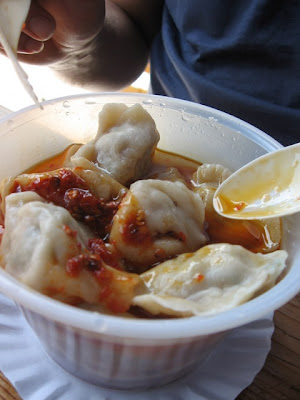 Right next to the noodle lady is a stand selling Asian vegetables and basic Chinese groceries, but I couldn't take a photo because the nice noodle stand people warned me off of trying. Big nasty looking Hungarian paramilitary security guards are happy to confiscate your camera. There is a strict policy of no photography allowed in the Four Tigers Market, which possibly dates back to its rough reputation in the Wild East Years of the 1990s, when the operation of the market was wrested from a shady mafiod Hungarian security guard company by a former Hungarian Minister of the Interior using Hungarian Army commandos. Subsequently, said Minister retired to operate the market himself as a sort of profitable private fiefdom, free of annoyances such as federal tax and customs investigators and - happily for us - local restaurant inspectors. Today the operation of the market is somewhat more legit, but the rules remain, as seen in the picture below showing the entrance gate to the market. No dogs, no cameras, no guns, and no video. And they mean it. 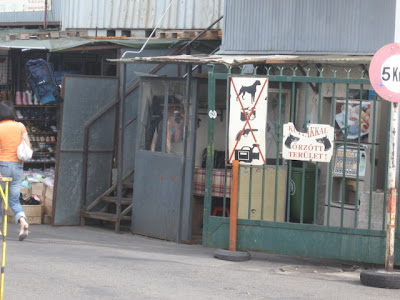 The photos I have here were all taken surreptitiously... I don't suggest that anybody visiting the market try to take photos in a manner that will get your camera confiscated. And, in any case, we usually get our chinese vegetables across the street at any of the grocery vans parked along Kőbányai ut or at the Rong rong market, directly across the street from the market's main entrance. 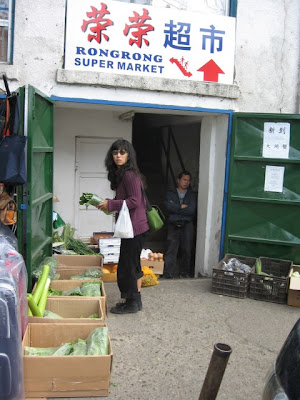 can any one Please tell me opening timings & days of this market.
Thanks

It is open daily until around 4 pm... go early (noon?) if you want to eat from the lunch stands. Not sure about Sundays, though. (The dumpling lady has dissappeared, and most of the shacks in the back are now Vietnamese... good rice plates and pho soup.)

Does anyone know if this place is still there? If so, are the wholesalers still there as well?