Milan: My Pretty Pony. On a Plate with Olive Oil.

The sense of outrage created by the eating of adorably cute donkeys in Soncino was naturally carried over to our next outing: horse meat in Milan. Italians eat just about everything that moves. Italians are reknowned all over the world as avid hunters - they love to shoot birds, wild hogs, deer. You name it, and you will meet Italians blasting away at it. That's because they have shot everything that could ever move in Italy and eaten it. Entire species of birds and rodents native to Italy have seen extinction come in the form of careful broiling, lovingly sauced with just a hint of sage and maybe some wild mushrooms... and then... POOF! Extinct. Gone from the face of the earth except for an aroma that lingering in the kitchen. 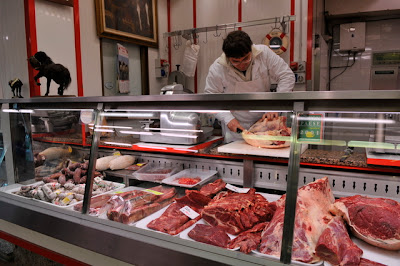 The next thing you know, you are down to eating the domesticated animals, a a step down, I know, but you gotta do what you gotta do. You eat donkeys. You eat horses. You look up from your plate of My Pretty Pony and suddenly realize that these creatures are damn tasty meat. 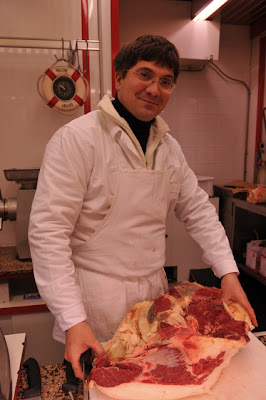 And then you go looking for more. As we did at the Taverna Moriggi in the old financial district of Milan. The Moriggi is one of the oldest eating establishments in Milan... located near a bunch of Roman ruins dating from the fourth century days when nobody really knew who the hell ran the Roman empire anymore. Was it Ogoric the Blind? Or Astroboye the Unitdy? Nobody remembers. Things got awfully confusing between the second and sixth centuries. 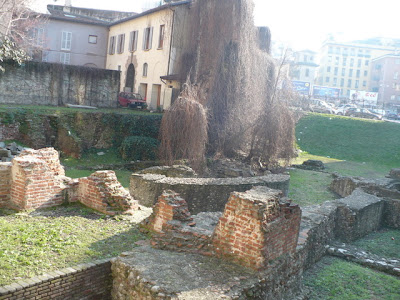 Though the early Anno Domini centuries, the Western Roman empire had a few bad times - don't we all? - and, reasonably, spent those centuries holed up in Milan, far from the malarial swamps and Berber pirate raids of Rome. There was an invasion of Huns, similar to our trip but lacking the cheap air fares we got on Whizz Air, there were invasive waves of Vandals and Ostrogoths and Avars and Gauls. And the Taverna Moriggi stands as a testament to those days, situated on one of the oldest buildings in the downtown area. 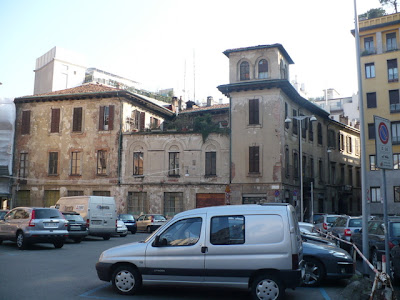 The Moriggi is one of the last honest, cheap old style Milanese lunch joints still functioning in the downtown. With a typical sense of Milanese style, it has the air of someplace unchanged since the early 19th century. 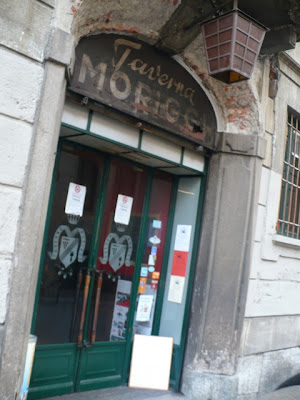 Where the Barbarians once brought Rome to its knees, today yuppies from Milan's finace district attempt to to the same. And after a hard morning of squandering wealth, you need to eat. The fashionistas are all crowding the downtown eateries, so the yuppiosi find there way to via Moriggi 8 for lunch. 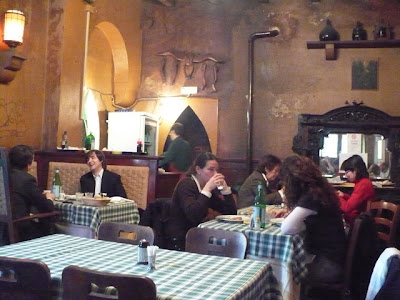 The last time Igor took us here the place was packed and we couldn't get atble. We were luckier this time. Igor went for the classic Milanese veal cutlet. This is essentiually a Wiener Schnitzel, except that the Viennese were probably still ripping live squirrels apart with their teeth when the Milanesi learned how to bread veal and fry it. In Hungary, as well as a lot of places in Europe, a "Milanese cutlet" means a breaded meat-wad served next to some spaghetti. In Milan it is served with potatoes. And you can't find a coteletta milanese more perfect than at the Moriggi. 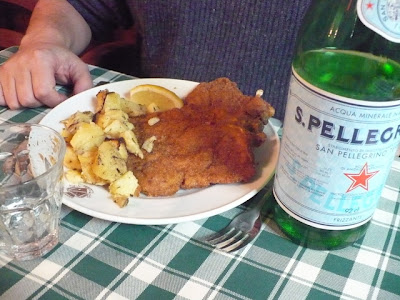 I had built up a decent appetite walking around the city for hours on end filling up on the beauty that is Milan. Lots of people - just about everyone, actually - take exception to my love of Milan. It's kind of ugly, big, and busy, but that is how I like my cities. So I walk around until my feet are about to fall off and then I look for lunch. In such cases, offer me pasta in a saffron cream sauce with bits of speck bacon, and I am yours, baby... 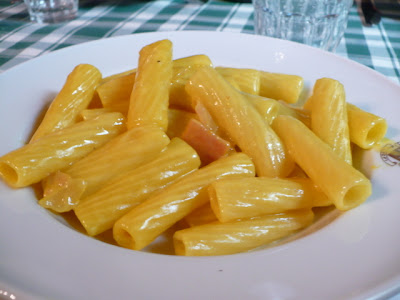 My brother - the one who likes "forts and stuff" - is a chef in California who is very well known for his hand at Northern Italian cooking. And I like to eat what he cooks, but until Ron gets his lardo-butt on a plane and comes over to taste Northen Italian cooking in its home territory - and I do not mean Sonoma County - he is simply fooling his durned unkosher self. You want to taste Italian home flavor? Only in Italy. This is the face of a Jew eating bacon in saffron cream sauce. I'm going to hell. But at what cost? Damn... is there a branch of Moriggi's in Hell? 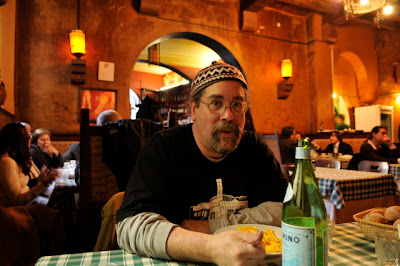 Now we get to the... meat of the matter! Horse meat! Not just any cut of nag, but brescaola di My Pretty Pony. 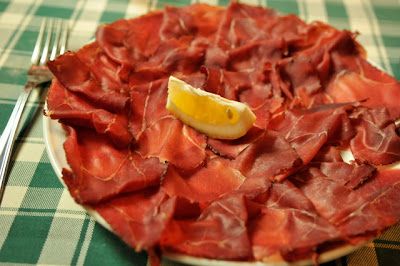 Here we have brescaola - air cured dried horse meat. Now, a lot of folks have a problem with eating horse, consigning it to the kind of foods that one eats during, say, the siege of Paris in 1871, just prior to starting on the terrines of Zoo animals. I however, have no such qulams. Italians understand the ten-year-old kid's approach to good cold cuts. Why just offer a couple of slices? If it is so good, why not cover the plate with a whole lot of it and fill yourself for lunch? Which is what we got at Taverna Moriggi. A frigging horse feast. 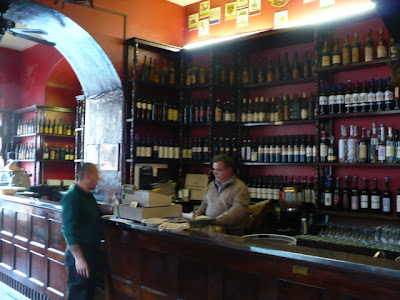 The Bar at the Taverna Moriggi. A better selection of wines will be hard to find, and knowing that I am not good at walking thousands of urban kilometers in the afternoon after drinking wine, I stuck to mineral water for my meal. But walking creates a thirst, so Igor led us towards a local bar for a coffee. In Italy coffee is... unbelievably fantastic. Is that enough superlative for you? It is true. Order your coffee lungo, though. An Italian espresso is usually two teaspoons of incredibly strong and delicious super coffee, but still, it is only two teaspoons. A cafe lungo means you get a bit more hot water tossed in with your coffee, and it still beats any coffee on the face of the planet. Anywhere. 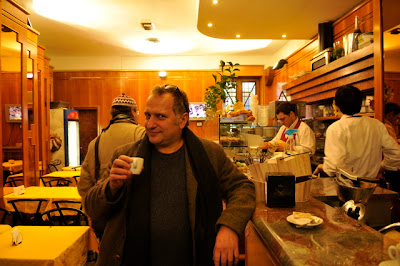 Tooling about the neighborhood brought us to the Basilica of Sant'Ambrogio. This is one of the earliest churches in Christian history - it was built by Bishop Ambrose in 379-386, in an area where numerous martyrs of the Roman persecutions had been buried. The first name of the church was in fact Basilica Martyrum. Then they realized that nobody could possibly ever spell that and went for Sant'Ambrogio. The flat appearance of the hut-like façade is typical of Lombard medieval architecture. Lombards were into huts. Given its age, it was much more impressive to me than the ever-unfinished Duomo downtown. 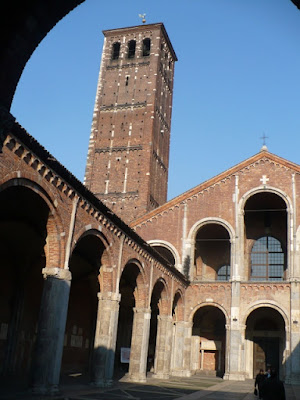 Oddly, it seems that this plaque, located outside the Basilica, shows annoying exclusivist tendancies. Somehow, it seems people who bake pizzas in summer for a living are not allowed into the church, nor are are people who use cell phones, which eliminates most of the population of Italy. 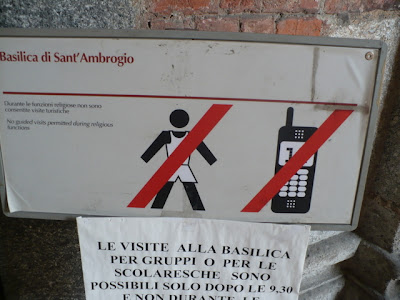 All in all, a good day in Milan... but even late at night, you gotta get home and nibble on something. Take out! Is that journalist Kate Carlisle in the background? Damn! It is! And... she's hungry... 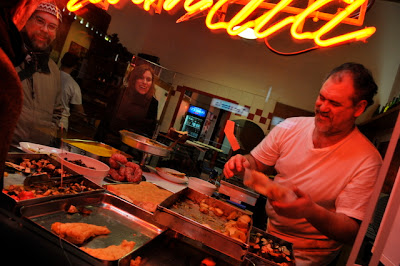 Found your post through a Google Alert on Milan -so nice to see someone wax poetic about Milan (I live here!) Thanks for giving me another restaurant to check out.

It is my hometown too. congratulations for the telling description, both on the absence of social memory and on taverna moriggi (and on italian hunters).

Unknown said...
This comment has been removed by a blog administrator.
1:02 PM