I'm just about to run out for a nice köfte lunch down the street. Istanbul köfte have an airy texture hat I have never been able to match when cooking at home using ground beef. It turns out that the meat for köfte is ground extremely fine, and bread is often added as a binder. Since you can't get a decent hambrger east of Brooklyn, this is what will have to substitute for the time being. My favorite köfteçi ("provider of kofte") is up the street at Tünel square, a place our friend Helen introduced us to last year. 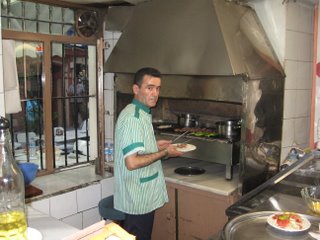 My personal favorite is the inegol köfte, which are small and beefy, but there are lots of different types of finger shaped hamburger fingers for sale on virtually every street corner. 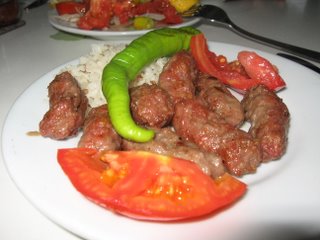 Brother Ron writes that he always wanted to visit Istanbul because of
a) the food, and

Now, Ron Cohen is a 45 year old professional chef, a successful designer of restaurants, and a master of Northern Italian and continental cuisine. He may well be the most respected chef in the Silicon Valley. But I am pretty sure that, late at night after the staff goes home, he and a couple of Mexican kitchen workers take out some of those cardboard boxes used to ship prime jumbo lobsters and artisanal beef imported from France, set them up in the parking lot and play "forts." So Ron, these are for you. First, my nabe, known as the Kule, or Tower district, because of the Galata tower located up my street. 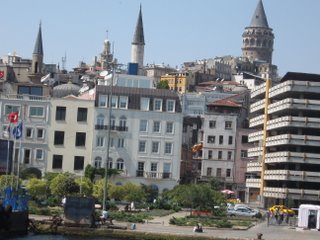 Next stop, Rumeli hisar, one of two forts built by the Ottomans during the siege of Constantinople in 1453 to cut off supplies coming down from the black sea. 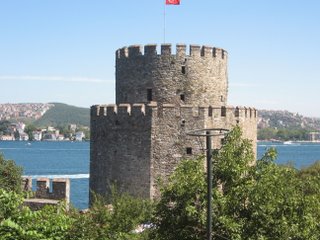 Just down my street in Karaköy is a street full of buildings dating from the Genoese colony that founded the neighborhood in the 14th century. These aren't historical monuments, these are still buildings in daily use. 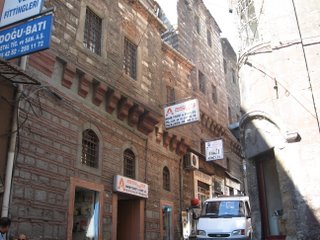 The Tekfur Sarayı, located near the Kariye Church by Edirnekapı, is the only surviving Byzantine palace. By the thirteenth century Constantinople had become a pretty unlivable city - fires, plagues, and garbage caused the Emporer to move his palace out to a more rural area by the city walls. 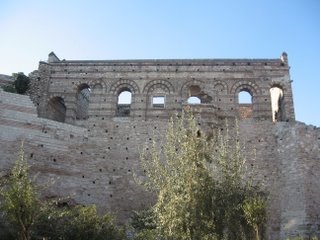 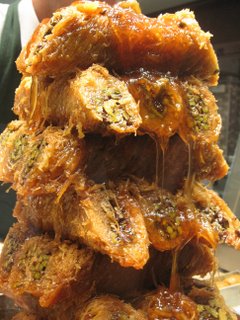