The Fatih Siirt Market is located just behind the old Byzantine water aqueduct, which runs across Ataturk Bulevard Between Aksaray and Unkapanı districts. Wherever you go in Istanbul you can find bits of old Byzantium laying around. Old churches were converted into mosques, bits of palaces morphed into workshops or storehouses, some retaining wall incorporated into an apartment foundation. Here is the Aqueduct - which now provides shade for a tea garden behind the market. 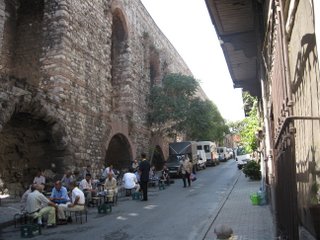 Of course, Osman Buryançi is not the only lamb paradise in the Fatih market. There is this place, also good - they serve big flat lavash bread and also lamb stews. 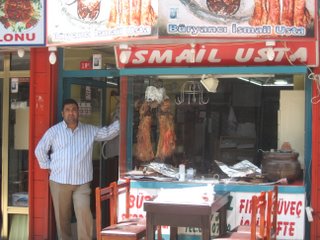 And this one, which i haven't tried yet (we hit this market for lunch every time we come to Istanbul.) 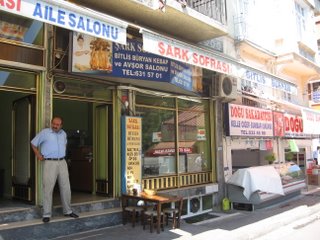 The sign advertises an "Aile Salonu" - a room upstairs for women, families, or mixed seating. Downstairs seating is really for men. Fatih is one of the most conservative Sunni Muslim districts in Istanbul. More women in scarves, a lot of them in black burkas, and men dressed in long coats and wearing skullcaps. Photographers - and tourists - are not common here but Fumie didn't have any problem working. One woman wearing an ankle length coat and scarf approached us and asked if we were journalists. she also was a photographer, she said in perfect English, but it was always difficult to take pictures in Fatih. She said it was probably easier for us since we looked like foreigners. And even conservative Muslims here are still Turks, and their inate graciousness prevents them from hollering at the foreign photographers, which would be normal procedure in East Europe. This is the Çarşamba Pazar (Wednsday Market) in Fatih - a huge food and clothing market that stretches for about a mile. 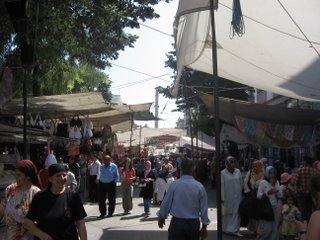 After the Market we walked down the hill to the Fener district. Fener used to be one of the main Greek districts of Istanbul, until the anti-Greek riots in 1955 caused the majority of Istanbul's Greeks to emigrate to Greece. Istanbul had 100,000 Greeks in 1955. Today less than 5,000 remain here, mostly elderly people in the Beyoğlu district. The empty real estate they left behind was often occupied by poor internal immigrants from Kurdistan and eastern Turkey. 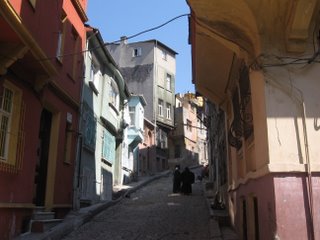 Fener District is the original home of the Phanariote rulers of Romania and Moldavia - Christian Greeks sent to the Ottoman provinces of Wallachia and Moldavia to rule on behalf of the Sultan in the 18th century.

Walking further west of Fener, you reach Balat, which was one of the original old Jewish neighborhoods. Although the Achrida Synagogue is still here, almost no Jews remain in this district - they mostly moved to Hasköy and then to Şişli and Nisantaşı after the second world war. All though Balat and Fener you can find discraded bits of Byzantium laying around. Here is a bit of the Blachernae Palace, which housed the last Byzantine Emporers. 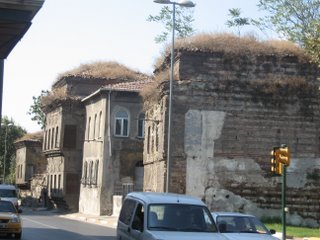 There's nothing like a car repair shop built using the wall structure of the last Byzantine palace: 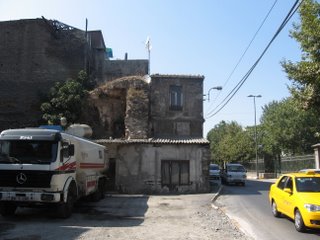 In Karaköy, just below our hotel, is the hardware market - screwdrives, pliers, lawn mowers, water hoses. the main warehouse are is located in what appears to be an older Byzantine ruin - most of this neighborhood was built by the Genoese after the fourth crusade, so this sticks out in Karaköy - which is now essentially a banking district. 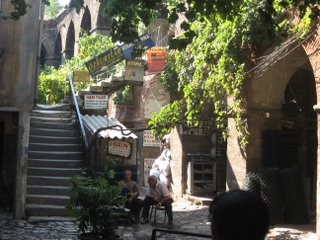 The white marble base of this water pump in the warehouse is in classic older Roman-era Byzantine style. Why toss anything out just because your empire falls in 1454? You might find some industrial use for it 600 years later. 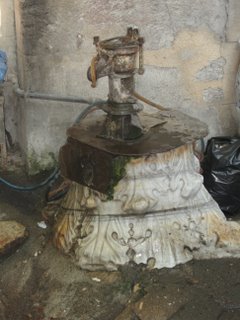