Our wifi connection has been slow and unsteady lately, so I have been slow updating. Just a few pictures of shopping madness at the Grand Bazaar (AKA the Covered Bazaar) in central Istanbul at Beyazit. This is the Mother Of All Shopping Malls, the central consumer market of the Ottoman Empire. NOTE: Nothing at all was bought during the taking of these pictures! 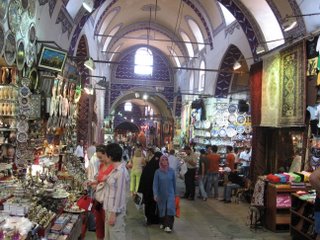 Ringing the bazaar are dozens of hans, which house the associations of merchants from various trades and regions. They are a combination of warehouse, hotel, insurance company and religious brotherhood all rolled into one, and have existed for hundreds of years. 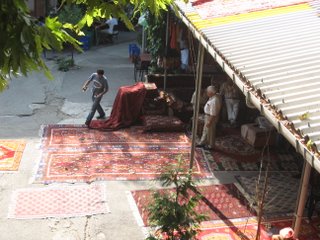 This is the han of the central Asian rug and textile sellers. 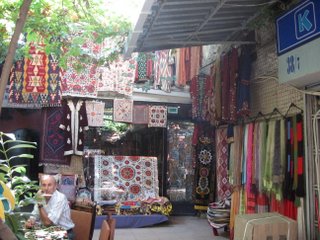 Fumie with our latest kebab shop discovery (US$ 2.50 a lunch. Around the corner from us in Karaköy.) 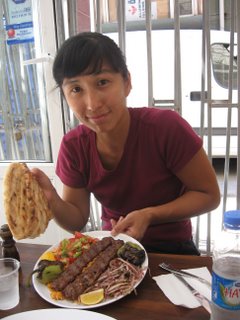 And wandering around Kadiköy on the Asian side of Istanbul we found some great music in a fish resturant bar. All the fish bars attract Gypsy çalga musicians. 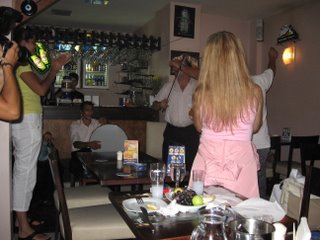 The other night we went to visit a meyhane near Taxim to take pictures for fumie's job. Meyhanes are resturants that specialize in long set dinners featuring about three hours of serial appetizers called meze, which are acommpaniied by glasses of strong raki and a band playing fasil, light classical Istanbul songs, to which everybody sings along. There was a wedding reception going on, but nobody seemed put out by our sudden visit. 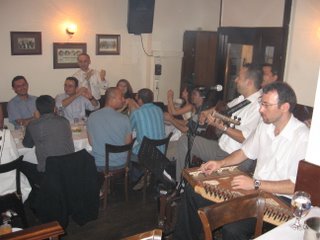 Once upon a time, I went to the Grand Bazaar in central Istanbul at Beyazit. I visited the central consumer market of the Ottoman Empire. There have many central Asian rug and textile sellers in this market. I had purchased many lucrative items from this Grand Bazaar.