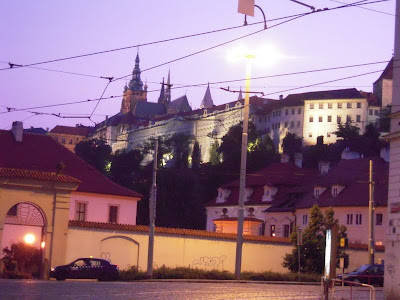 Our recent travels began with a gig in Prague, which is a wonderful city for tourists in the summer but definately not if you are a band trying to park a Ford Transit mini-bus anywhere near the downtown. None of the underground garages can accomodate a van, since Prague was spared the destuctive bombing and destruction of World War II and thus its city center lacks the kind of blemished urban open spaces that make parking in Budapest, Warsaw or Berlin such a joy of post-war European experience. Still... Prague is stunning. We played as part of the Nine Gates Festival in the Wallenstein gardens of the Czech Senate. 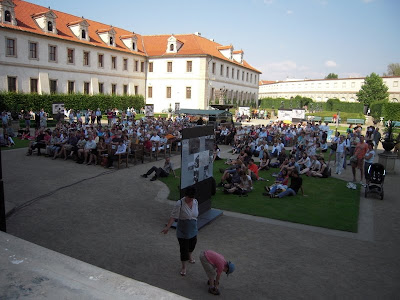 This was our third time playing the Nine Gates festival, and each time the organizing has gotten ever better... there has been a lot of fine tuning going on in the Prague World music scene over the last few years. Although inteneded as a Klezmer Festival, this year's festival was co-sponsored by the Prague Romanian Culture Institute, so things were a bit relaxed on the semito-authenticity front. There was some great Romanian Jazz when we were there. 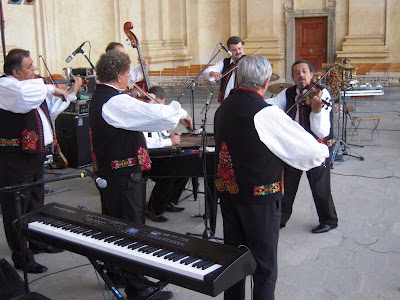 The opening band was a local Czech Gypsy band, whose Jewish content seemed limited to having a guy in a tuxedo singing a medley from "Fiddler on the Roof"... which is fine, I suppose... I mean, that's what most folks expect. What I was expecting was this: 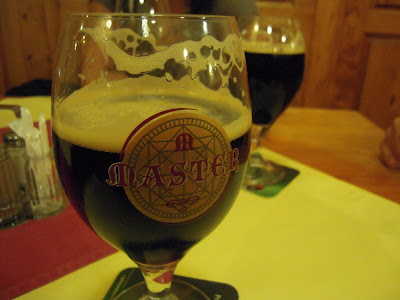 Fresh Pilsner beer, the dark variety. Yeah... I've been on a diet... haven't had a beer since February, but heck, I'm in Prague, and the Czech's don't have any sense of a light summer cuisine. Bread and potato dumplings everywhere. And I mean everywhere. 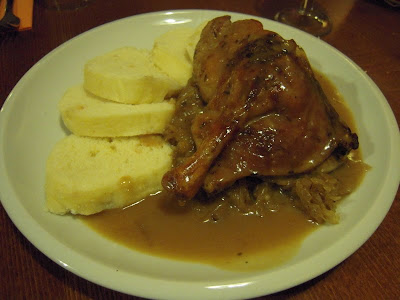 Duck with knedly dumplings. Essentially, knedly is steamed bread. Not exactly the thing for Mr. Low-Carb, but this is the Czech Republic, after all, and that is duck, so... There are other forms of knedly mixing white and dark breads, and the dumps go well with any kind of gravy or sauce, although I really wish the Czechs would look at their calendars and say "Ah. Summer. Maybe time to lighten up." 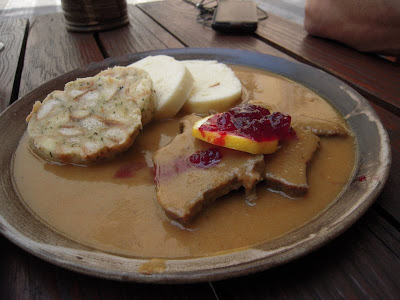 We didn't see a single vegetable - with the exception of sauerkraut - during our entire stay in Prague. Did that bother us? No. But, since the national food is beer, and food at beer halls is filling and a lot cheaper than anything in a downtown restaurant, it remains a knedly-fest weekend for us. In fact, the first big carbo-load I had eaten in months was this: 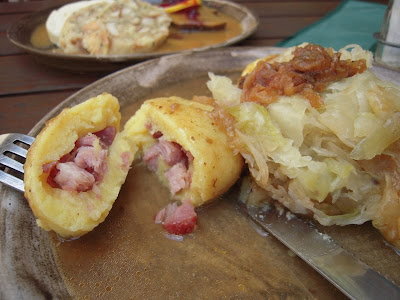 Potato dumplings stuffed with smoked non-kosher meat served with the mild, cumin tinged sour cabbage that Czech serve with almost every dumpling dish. Eat thgis and you won;t be hungry anymore. The same goes for these stereotypical Good Soldier Svejk weenies which are pushed all over town to the teeming touristic masses. 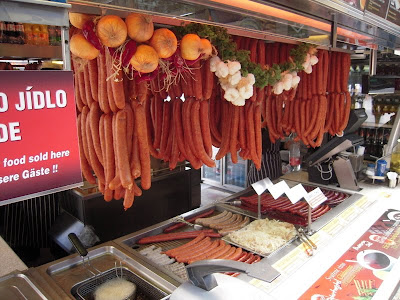 As regards the parking problem... we did get a parking ticket on the mini-bus when we parked it in a public overnight space near the Malostranska Church. Like a good citizen of the EU that I am I marched down to the local police station to pay up (our van rental service travels to Prague quite a lot, after all...) and the local cops took down my info, asked if we were with the Festival, smiled, and told us to go our merry way. No fine! And that's fine with me.
Posted by dumneazu at 11:41 AM