Mici for the Masses: Oradea, Romania 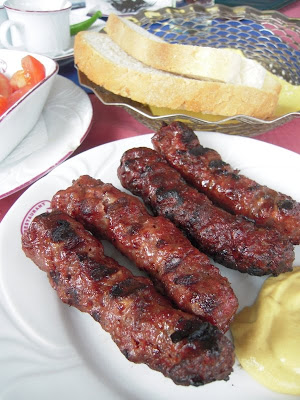 The band just got back from a tour in which we hit Prague, Romania, and Slovakia in ten days, driving along in our rented mini-bus for whole days to make it to gigs and eating at both the high and low ends of the trough as we went. Yesterday the meat du jour was Romanian mici. 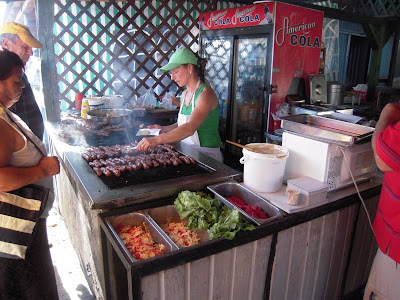 While I love cevapcici and will crawl barechested over a field of broken glass to get some, there are times in this cruel and deceptive world when you simply can't get any. There are spots on the planet where there simply are no displaced Bosnians available to grill cevapi for you, and this is a sad fact that we all must learn to deal with. So you lower your standards, grit your teeth, and man up to face whatever ground meat wad the locals throw at you. Yesterday it was mici, (pronounced meech) the Romanian version of the pan-Balkan meat-dispensed-in-a-tube-form which is also known as mititei. We started our day in Oradea, (known in Hungarian as Nagyvárad) located on the border with Hungary, having done a concert in town at the Posticum, a modest jazz-oriented culture center. 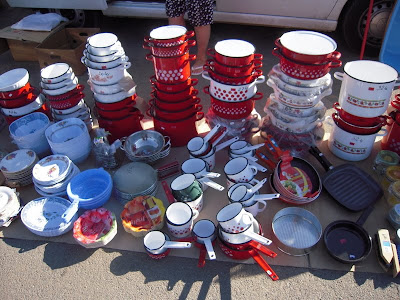 In the morning we were up early to hit the flea market. The Oradea flea market is a huge, sprawling sun baked celebration of free market capitalism, selling everything from used autos to accordions. In eastern Europe the flea market is where most folks do their home appliance shopping - while you can get everything new and shiny at the new malls, people trust the second hand stalls to offer things at a more affordable price. 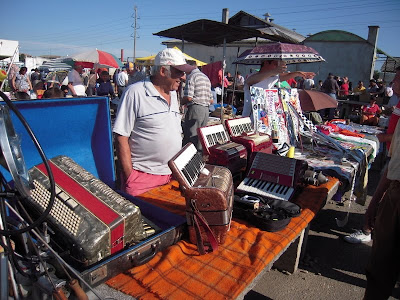 The Pet Market was fascinating blend of animals that could be either made into lovely home companions or just eaten outright with potatoes and peppers. Pigeons and chickens were on sale alongside puppies and parakeets. There was one rabbit for sale that was the size of a German shepherd. 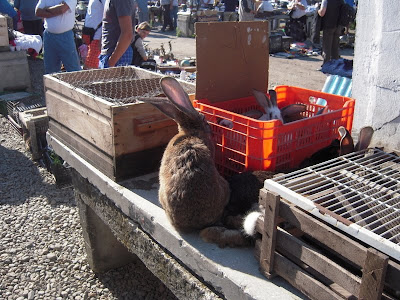 Now that rabbit will either be a wonderful garden pet named Fluffy or a hearty stew named "Eat me!" Which will it be? I'm betting on the stew. Even having a pet area in a flea market, fer chrissakes, is a bit disturbing. Marketing "Flea" and "Pet" in the same sentence? If you are used to hygenic, EU-conforming pet shops, perhaps the flea market in Ordea is not for you. It seems to be struggling with an identity issue: "Am I a pet shop or a Supermarket meat section? I just can't seem to decide!" But there's no need to eat the pets here - just saunter over to the mici stands. 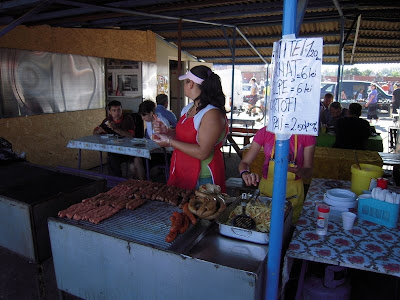 The Oradea flea market has the most grilled meat stands of any single market I have ever seen in Romania. Big sellers are grilled kolbasz, pork chops, chicken legs, and at every stand.... mici. Considering that the market opens at 6 am, that makes mici the breakfast of champions. Most market mici I have eaten have been miserable, charred, raw in the center blobs of fat and gristle, the mici I breakfasted on here were superb. 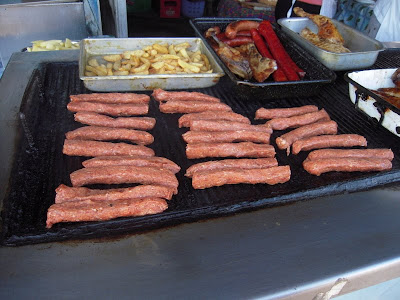 Mici have been slowly modernizing over the last decade. Refigeration - once an exotic luxury in rural Romanian parking lots but now quite commonplace - had made the mici business safer and allowed for a better quality ground meat experience. As with Yugoslav cevap, the ground meat in mici has to be mixed with salt and kneaded into a paste to which a small amount of soda bicarbonate is added. The salted ground meat needs to be cold in order to form an emulsion or else wou end up with a simple tubular hamburger wad. Modern mici are thin and long when put on the grill, but blow up as the bicarbonate heats up and expands, which also adds a nice smooth grilled crust to the meat. Another adavantage of mici is that they are cheap. very cheap. Laughably cheap. 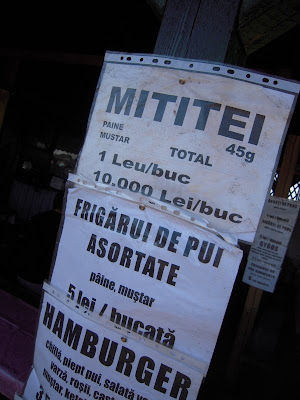 At the present exchange of 4.2 Romanian lei to one Euro, this is meat for the masses at Euro 25 cents a piece. Served with a hunk of bread and the traditionally crappy thin mustard, four mici is a hefty meal. 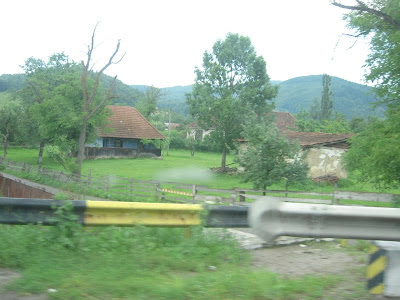 That's not a rabbit; it's a hare

kNo, it's a rabbit alright, and here at the other side of Europe (Flanders) we have these giants as well. I once stayed at the Posticum (Latin for Backdoor), nice club.