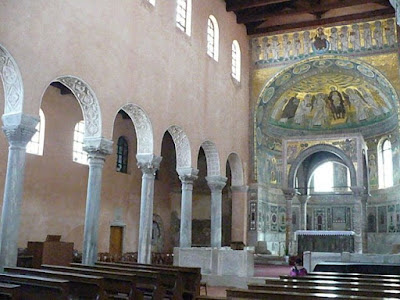 After spending two days in Pula, we headed north along the Istrian coast by bus. Porec looked inviting - a beautiful Venetian old town occupying a small peninsula jutting into the Adriatic, but we were warned it was something of a tourist magnet, which in these parts means crowds of aging fat Teutons and restaurants offering Bavarian sausages. We had a three hour layover to change buses, which was just about enough for Porec' main sites: the old town and the amazing Euphrasian Basilica. 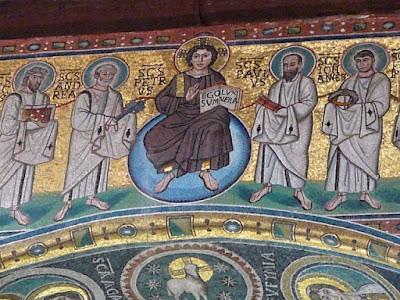 Begun in the 4th century, the Euphrasian Basicilica was completed during the sixth century, making it one seriously old bit of European real estate. I have a soft spot for far flung bits of Byzantium, the remnants of late Roman era municipal spending projects that were just as often lost to some horde of Ostrogoths or Avars as soon as they were completed. The interior is remarkably well preserved, earning it a spot on the Unesco World Heritage list. 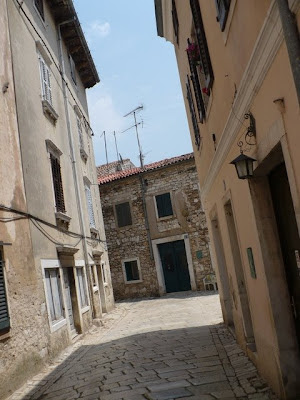 You can see the old town of Porec in an hour's stroll... but it was hot and we had a bus to catch. At any cafe or bar, you can order lemonade, which usually comes unsweetened, and is just the thing for a hot afternoon waiting for the bus. 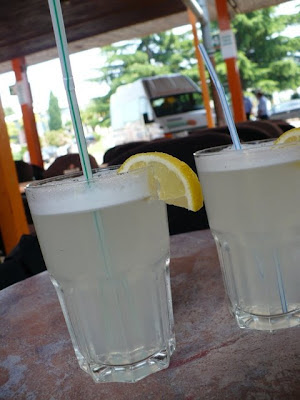 Just about every bakery offers burek, the Ottoman pan-Balkan savory pastry that is our breakfast of choice. Meat or cheese, burek is cheap and fast and damn good. Most Croatian towns have an immigrant community of Kosovo Albanians or Macedonian Turks who specialize in baking bureks. Budapest actually now has two burek bakeries run by a Croatian family who fled from Subotica in serbia after the Yugoslav civil wars. 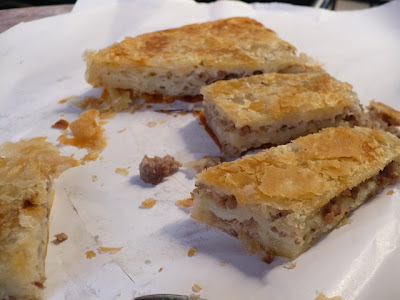 We had heard good things about Novigrad, a small fishing town on the coast just south of Umag. Novigrad is a bit off the beaten path, but it gets enough tourist traffic in the summer to support restaurants and seaside bars without the feeling that the town has surrendered its soul to the summering hordes. 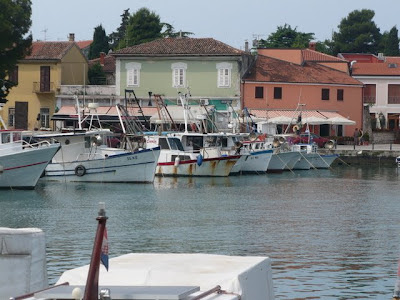 After arriving at the bus station, we checked with a private tourist office next door, and soon 50 Euros got us a beautiful private apartment twenty meters away from the sea. Air conditioning! Kitchen! Satelite TV! Croatia regulates its tourist business carefully, so you can trust these apartment rentals for quality - the rate per person comes to the same as a dorm bed in a youth hostel. No contest... 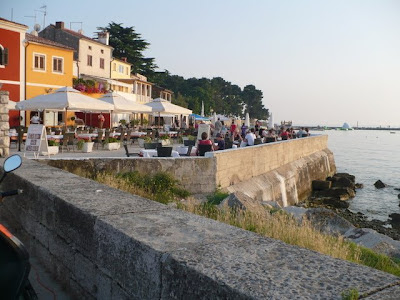 Now, I am not the beachiest person on the block, but to be honest, the Istrian coast has pretty but uninviting beaches... rocky, stony, bring a pair of rubber beach shoes. At Novigrad, at least, the beach has a series of stone approaches and child friendly inner inlets protected from the open sea. 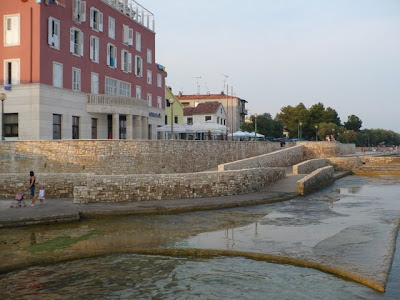 And nobody is ever far from a beer. I had my first beer in five months here... and probably my last beer for another five months. Actually, I dropped my low-carb diet while in Istria and was surprised that I didn't blow up like a puffer fish in response to eating pasta and pizza after months of going without. 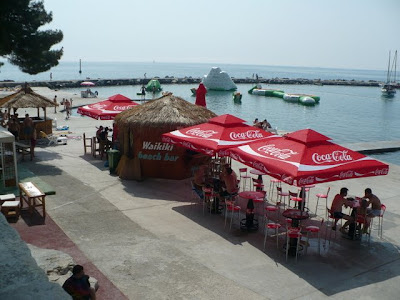 I mean, how can you say no to a seafood risotto like this? As far as restaurant dining is concerned, Istria is definately a dialect of Italian cuisine, and the Adriatic this far north is known for its slimey crawly sea bugs. Grilled sardines are an affordable specialty, but almost any other scaled fish will send you to a bank officer before the waitress arrives. The Adriatic, indeed, the entire Mediterranean sea, is slowly being fished out and supplies of white-fleshed fish are at an expensive premium. Seafood, however, is within reach of the average eater, perhaps in a risotto... 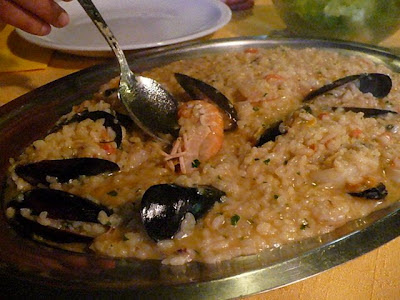 Or in a pasta dish, as in this seafood tagliatelle for two (20 Euros for a portion for two) at the Torci 18 Restaurant and (amazingly inexpensive) Hotel, which is open only for a few months a year during the tourist season. The owners started the meal by serving us a basket of bread with a small bowl of bright green olive oil for dipping. check out the olive oil in the pasta sauce. This oil has been rated one of the world's top 100 olive oils and comes from 1000 trees in the family's own orchard. the trees themselves were transplanted cultivars from Lecce, in southern Italy, but in Istria's different soils and climate they produced lovely, rich flavored oil that could almost be a meal in itself. The next day I went to the farmer's market and bought a liter to take home. 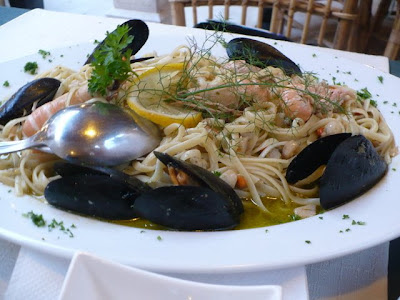 We followed this with a plate of fried squid. Kalamari are always plentiful and are usually grilled and doused with olive oil, or fried in a light coating of flour. The Croatian coast is a paradise for cephalopod lovers... octopus salads, cuttlefish risotto, or squids are on just about every menu. Apparently, the BBC says that squids are now the one species which is the most prevalent biomass of any living critter on earth. And they only live for 180 days. And they can comunicate by varying their skin color patterns and thus show signs of intelligence. And man, they taste gooood.... 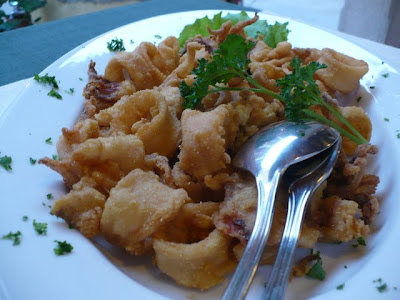 And then to the town square, where the cafes were all set up with wide screen televisions to watch the semi-finals of the European Cup soccer matches. 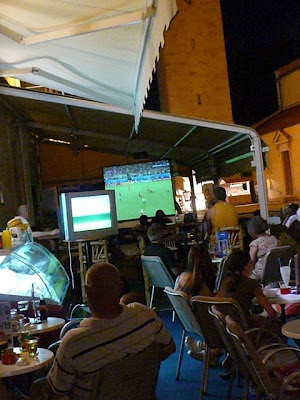 Oh, that's a mouth-watering post, Dumneazu! I've just come back from Terracina in Italy - on the coast between Rome and Naples - where they also have great seafood and squid in abundance. But I was a bit disappointed with the snorkling there (a hobby of mine); do if you know if there's good snorkling where you were in Istria?

I don't know exactly what constitutes "good" snorkeling... but the waters are crystal clear, rocky coast, pebbly beaches and bays.

I've been catching up on your old posts, and was very pleased to see and hear the Palatca Band, which (as per usual) I'd heard about from non-Romanian sources but had not encountered here. By the way, Passiondiscs has issued many of the old Romanian Electrecord recordings, if anybody's interested.

Hello! This food looks so delicious, and I can assure you that burek is the best food and it goes even better with cold yogurt! :D