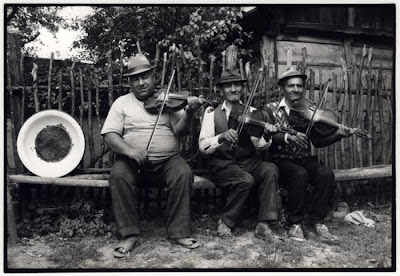 I am back in Budapest for a few days between sessions at the Weimar Yiddish Music festival. Di Naye K is heading up that way next week to do a concert on July 24th, and then we are providing music for the dance workshops - Klezmer in the morning for Yiddish dance (taught by our own Budapest Klezmer Dancing Queen Sue Foy, Michael Alpert from Brave Old World, and Zev Feldman) and Transylvanian Gypsy dancing in the afternoon with Florin Kodoban, the fiddler from the Palatka band. 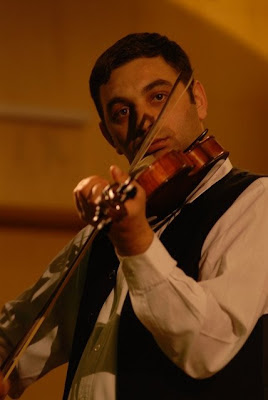 In Palatka, a small village in the Mezőség (or Câmpia Transilvaniei) twenty kilometers east of Cluj, the Kodoban, Radak, and Macsingo families have provided the music for the mixed ethnic populations of the Mezőség region for genersations. Palatka's virtual isolation has allowed it to preserve a particularly rich dance tradtion and an archaic style of fiddle band music, rich in ornamentation, lop-sided rythyms, and a dissonant sense of harmonizing modal melodies against major chords played on the three stringed, flat bridged viola known in Transylvania as the kontra. [The black and white photos of the Palatka musicians are from the website of the noted Hungarian photographer and musician Bela Kasa.] 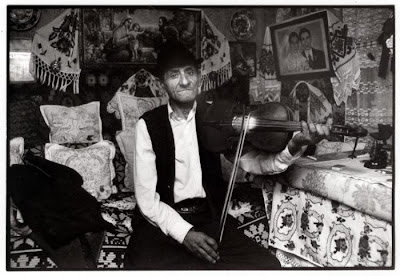 Of course, there was always a question about "which Gypsy dance" to which the answer is there is no single Roma dance tradition. The dances from Transylvania, however, are one of the few that are done to an instrumental music played by Roma for Roma, known as ţiganeşti in Romanian and cigány tanc in Hungarian, or basically, romani khelipe in Romani. 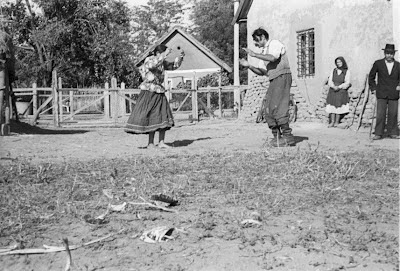 One of the main features of Romani dance, in contrast to the non-Gypsy gadjo population, is that the Roma maintain a much stricter separation and definition of gender roles between men and women. The Roma style of dance reflects this: men and women dance in couples but without touching or holding, for the most part. In the Mezőség a "dance cycle" begins with slow dances and can last over a half hour before ending with twenty minutes of fast csardas dances. The Gypsy dance cycles include some couple dances in which the couples are holding each other (such as the slow "lassu ciganytanc") but they then either skip or sit out the middle tempo dances until the final fast dances, during which the Roma men show off in a far more improvisiational manner than the non-Gypsy dancers. 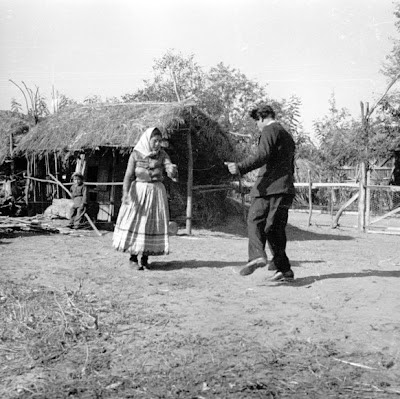 The middle tempo dances done by non-Gypsy peasants usually feature a lot of mixed couple figures that intertwine the dancers bodies - movements which are not considered proper by Romani attitudes towards gender interaction. It should be interesting to teach Roma dance to folk dancers - we are happy to teach women the men's steps and vice versa, but the dancers would never get a chance to use those figures in anyreal-life situation among Roma involving dance. It is a pretty strict rule in Roma society that gender roles are never reversed. 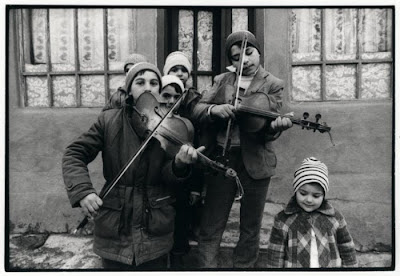 Part of the seminar session at Weimar concerned the interaction of Gypsy and Jewish musicians in eastern Europe. Festival director Alan Bern brought lautar musicians Adam Stinga and Marin Bunea (and Marin Recean, clarinetist) from Chisinau, Moldova and our own Kalman Balogh and Csaba Novak from Budapest for the Roma music project. Kalman brought along several bottles of top shelf Hungarian fruit brandy to liven things up. Look! Why is everybody smiling? 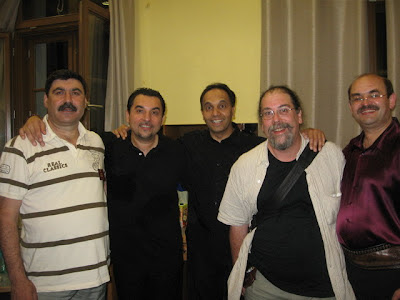 My Man in Austin, Mark Rubin, was on hand to handle low notes on tuba and bass. Mark is one of the finest people I know in the Klezmer scene, and also one of the funniest bastards on the face of the planet. He also has a tattoo on his arm of Moses recieving the comandments at Mt. Sinai. Unkosher, yes, but eminently cool. Did I mention that Mark is a Big Hungry Boy? 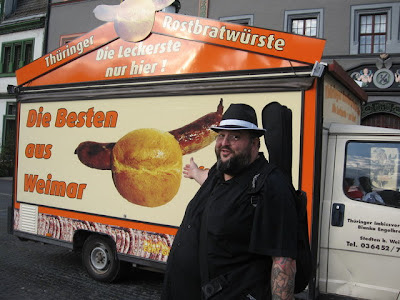 Another old friend from Budapest at Weimar was Claude Cahn, previously of the European Roma rights Center and now working for the Centre on Housing Rights and Evictions in Geneva. Claude spoke to the seminar about Roma Rights in Europe, but most of the time he held a special seminar entitled "Jewish-Roma Babies in Europe: Look at These Hundreds of Pictures of My Baby Daughter Sarah Kali Cahn" Sarah shares her mother Cosmina's beautiful eyes and Romani gracefulness, while from her father she seems to have inherited both intelligence and a whopping huge frigging Jewish shnozzola. 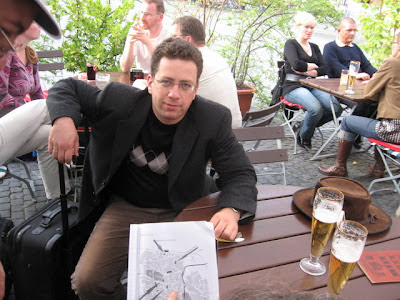 Weimar, as you all know, is where the Germans learned to make money worthless. Nevertheless the town is as cute as a German city can be, and crawling with tourists. It is in East Germany, which means the food is almost as bad as Finnish food (which is pretty hard to compete with, so let's give our Ossie friends an A for effort!) and the service makes Hungarian waiters seem like busy bees. On average, one waits for well over an hour after ordering a meal to get served. During that hour I am usually regaled by Mark Rubin loudly threatening to crush the wait staff to death beneath his massive buttocks. 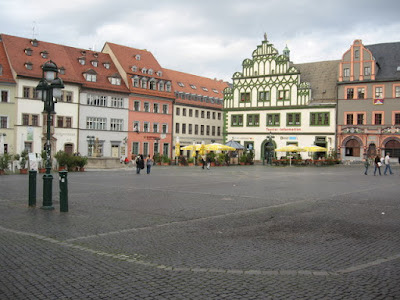 Our accomodation, however, was great: the Hotel Leonardo in Weimar gets my custom whenever I head through town with a wallet stuffed impossibly full of Euros. And they do, in fact, make a room service cheeseburger that knocked my socks off. I didn't feel inspired to photograph much of the East German food I encountered. It was mostly brown, and looked like, well, brown stuff. This was probably the first time in my life that I ordered room service... heck, it wasn't even that expensive. And you can't get a good burger in Hungary at all. I salute you, Masterful Burger Chef of the Hotel Leonardo Weimar! 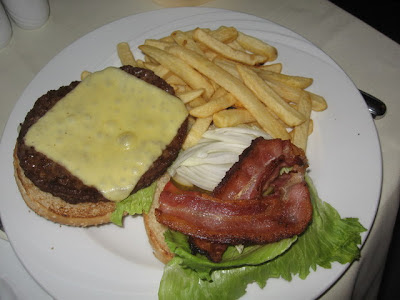 Ay ay ay, the things I most want want to do here in Transylvania are most readily available as an export in Germany! And not for the first time. I was once at a party in Mociu (very near Pălatca) and we had a left-handed violinist called something like Stângaiţa, maybe you know him. And it appears that you know Kalman Balogh personally - I'd move to Budapest (or Germany) if I could persuade the wife.

Bobby, too much of that Russky Shtandard I'll reckon, but it's actually a depiction of David beheading a fallen Goliath on my arm. Though the Moses shtik might look good on either of my mammoth butt cheeks, eh what?

Bob, typically brilliant reporting, except the facts, man, the facts:

Both my schnozzola and that of my in-every-way-perfect daughter are cute as a button.

Next year in Wannsee!
Claude

Anonymous said...
This comment has been removed by a blog administrator.
9:12 PM

Anonymous said...
This comment has been removed by a blog administrator.
8:57 AM