Istrian Croatia: Italy without the Vowels. 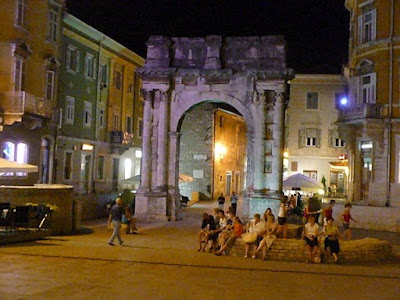 We just got home from a jaunt over to Croatia. I'd been to Zagreb earlier this year, so I asked Captain Squid, my Croatian expert, for a suggestion on where else to travel. He popped the idea of a trip to Istria. At first it sounded convenient - on the map it seems a lot closer than Dalmatia. But close is not close enough - between the train trip and the buses to get to our destination it was a grueling 18 hour trip. We took the overnight train to Rijeka, arriving at dawn, and then headed down the coast towards Pula, the regional capital of Istria. 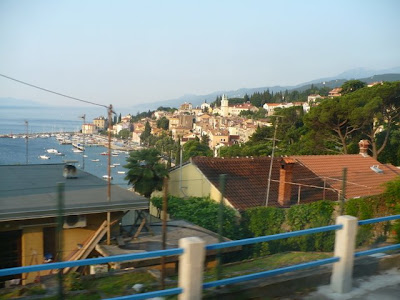 Rijeka used to be the Austro-Hungarian city of Fiume, and Opatjia, located just north of Rijeka, was where the the rich and benobled spent their summers. Yes, it is cute, in a Hapsburg way, but farther down the coast Istria reveals its Roman and Venetian history, and I have had enough of yellow Hapsburg houses for one year already. I was ready for something a bit older and more grand. Bring on the Roman colliseums! 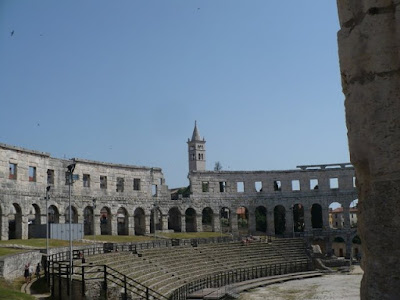 Pula used to be the Roman town of Polla, and was later held by Venice, then by the Hapsburgs, the Italy, and finally Yugoslavia. People would wake up in the morning and look out the window to see what flag was flying that day to figure out what nationality they were that day. Istria was a part of Italy until after WWII. Between 1946 and 1953 thousands of Istrians left for Italy - not only Italians, but a lot of Slovenes and Croats to boot - and elsewhere when the peninsula became part of Yugoslavia. Istrians still maintain a very strong regional identity as Istriani - whether they speak Italian (almost all Istrians do whether they are of Italian ethnicity or not, and most can manage English and German as well) or Croatian at home. It ticks off the Croatian nationalists - Istria consistently doesn't vote for them, even though there is an 80% Croatian majority population - but Istria is kind of like Italy's version of Transylvania. While most of the Italians left - taking their vowels with them - there is still a strong sense of Italian culture. Especially in the cuisine. 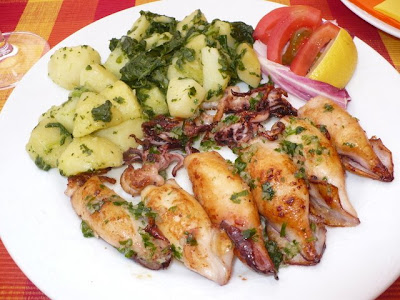 Istrian cuisine is based on geography and the seasons - near the coast there is seafood, inland pasta and some of the world's richest truffle hunting grounds. Truffle season is in the fall, though, so we made do with squid. Finned fish will cost you a pretty high price in Croatia, unless you buy smaller fish at the market and cook at home. No matter, since on a hot day some squids - always available and cheap - roasted with the classic Adriatic garnish of roast potato and swish chard blitva is just fine with me. 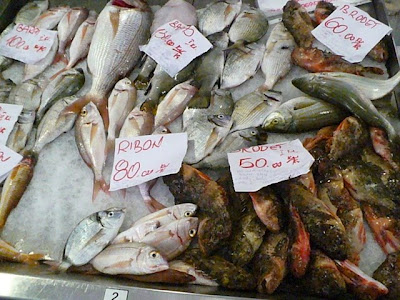 The fish market at Pula was tempting, but we have experienced cooking fish inside the small kitchens of rented tourist apartments. It reeks. It stinks up your clothes. It condemns the next innocant renters to fish aromas. Renting apartments is the way to go when traveling in Istria - we got very lucky and had great accomodations, but then you feel bad about leaving fish stench behind for the hosts to clean up. Of all the places we found, the unpretentiously named "Bulldog Fast Food" joint near our apartment offered the best squid plate and pljeskavica in Pula for well below tourist prices - and had a huge TV so we could watch the Euro Cup semi-finals outdoors in their garden (located between the Bus Station and Coliseum.) 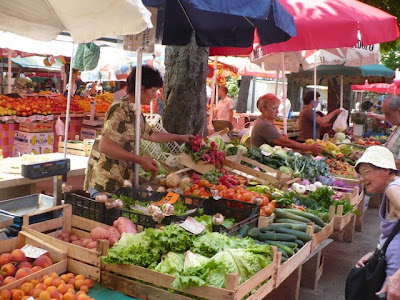 Lidia Bastianich, the celebrated Italian chef and cookbook author, was born in Pula and left with the Istrian Italian diaspora as a young girl, settling in New York city and marrying fellow Istriani Felix Bastianich. Her main contibution to the American approach to Italian cooking was to tell Americans to stop opening cans of Chef Boy-ar-di and to look out for fresh seasonal produce at the market. Which, in America, is not actually possible, because almost nothing is really seasonal in the States, although everything is always available in cloned plastic facsimile with natural organic flavor added. The Pula vegetable market, however, is definately seasonal - we are past blitva season and too early for truffles - and is housed next to a huge indoor fish and meat market. The top floors of the market (Trg - oh, how we miss vowels!) are all cafes and restaurants, which are heartily recommended if you can speak enough bad Croatian to impress the chefs at 10:30 pm with your Euro Football cup knowledge. Remembering that we are still, techinically ,in the Balkans, I ordered cevapcici. When in Rome, act like a Yugo... 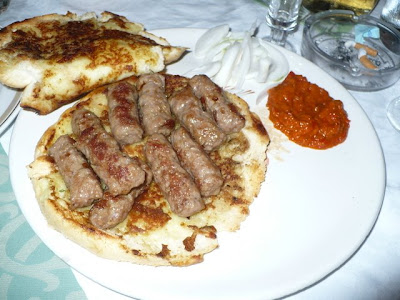 The chef/owner ran over to demonstrate the proper method of attacking his humoungous cevapcici plate (rip up the bread, which merely serves to keep cevap warm, dip in red pepper ajvar sauce, and eat cevap with fingers,) expressed surprise in our ability to speak a bastard hybrid of Macedonian and Croatian (with far too many accidental vowel sounds) and tried out his gastarbeiter German on us. Astonished that we could actually communicate in some detail - "The Turkish goalie. Very Good! Most Beloved! Yes! He father his from Tetovo!" - he ended up offering us several rounds of free slivovitz. Perhaps more than several. Actually, quite a lot. Ahh, the Balkans. Paradise with landmines. 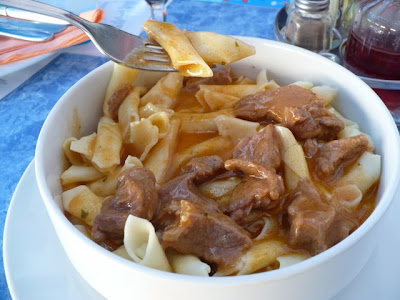 The classic Istrian pasta dish is fuzi, which is the local Venetian dialect for fusilli, and is essentialy a tube pasta rolled on a stick. Served with Istrian gulash (veal and light paprika sauce) it is a lot like what I tend to cook at home two days a week in the winter. Stew with mac. Just as in Dalmatia, there is always something non-fishy to serve the fishing boat crews who come back to port and don't want to see another damned fish on the plate for dinner. Luckily it wasn't too hot while we were in Pula... the old town buildings reminded you that you were, essentially, in a suburb of medeival Venice... 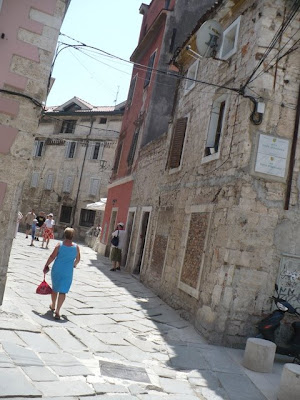