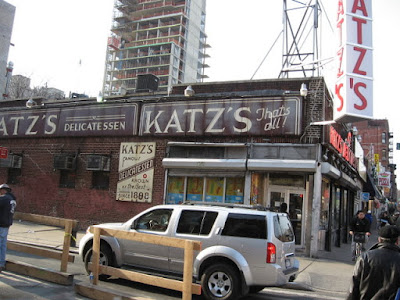 There are few absolutes in life, or at least, as one gets older there are fewer things about which one cares to hold absolute opinions. I am from New York City - born in "the boroughs" and therefore not naturally raised to hold my opinions about Things That Matter to New York. One thing that Matters to Da City is our native cuisine. And that means Katz's Delicatessen. 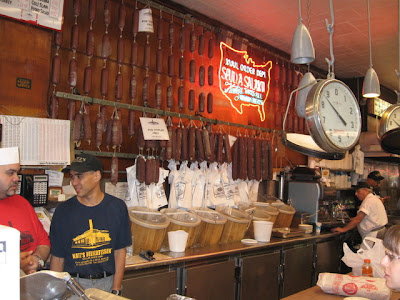 Katz' Delicatessen is to a New Yorker what seafood at La Cupole is to a Parisian, or sushi at Tsukuji is to a dyed in the wool Tokyo resident. Katz's Deli is the soul food of New York. Katz's is the last holdout of hardcore deli sandwiches in Manhatten. Sure there are other delis, and some can actually hold a candle to Katz (the Second Avenue Deli, soon to reopen in midtown Manhatten, for example)... but Katz's is an identity symbol to New Yorkers as powerful as the Statue of Liberty or the hole in the ground where the World Trade Center once stood. Katz's Deli is part of the glue that makes us New Yorkers hold together. 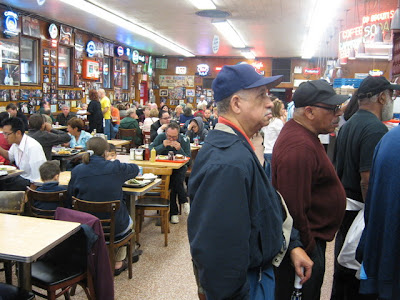 People standing in line at Katz's talk to each othger, give advice, counsel newcomers through the difficult choices ... hmmm... pastrami or a tongue and pastrami combo? Ordering at Katz's is like joining a commune. Katz's is unique. When you enter, you are given a ticket, which you will have marked by the countermen with your choices, and you present it to the cashier on the way out or face a hefty fine. New Yorkers know: one does not lose one's ticket. 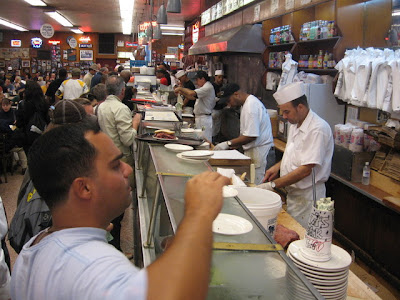 One gets in line behind a counterman - some of these guys have been here for years and each has his loyal fan followings among customers. Most of the speak the clipped Dominican Spanish that is the lingua franca of the inner boroughs. You place your order, (Whattayu want? Diga me... Lean or juicy?") and the counterman starts slicing meat, placing the first slices on the counter for you to taste and appraise like a fine wine. 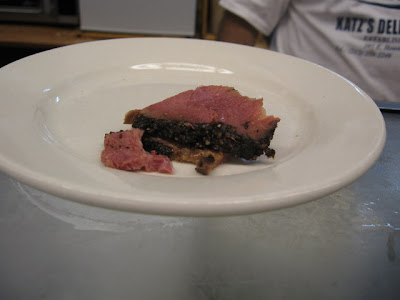 The experienced customer orders his meat "juicy" meaning dripping with the fats from which good pastrami and corned beef gets most of its flavor. An experienced customer also tips the counterman a dollar or two. These guys remember you and it pays to insure a better cut of meat on your next visit. You don't come to Katz's looking for low-cal options. If you have a cardiac condition, well, eating at Katz's may shorten your stay on earth, but it will also sweeten it. 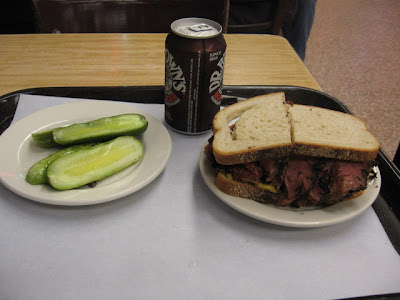 The classic order: pastrami sandwich, pickles, and Dr. Brown's Cel-Ray soda, which is a New York tradtion - celery flavored soda. One thing Katz's is not is cheap. Their sandwiches - which are huge and almost too much to eat in a single sitting for normal folks - have been inching upwards in price at about a dollar a year over the last five years. Pastrami is now $14.95, Corned Beef is now $13.95 and that's not becase any of the ingredients have to be imported from far away New Jersey. But who cares... its Katz's. Toss over the money and ... eat. 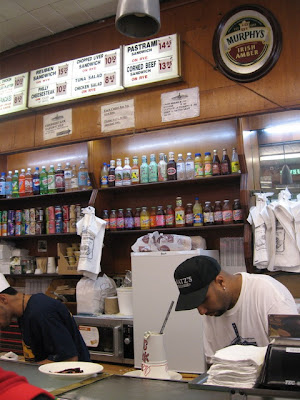 There has been talk going around about Katz's closing down or moving, due to a real state developement plan for the rather run down block on which Katz's stands. That is not going to happen. New York without Katz's is simply.... unthinkable. Good delis are getting rarer every day... here used to be dozens in Manhatten alone but today it is pretty much down to Katz's. 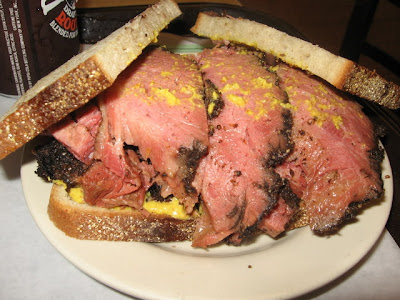 To give an idea of what makes Katz's so special, I produce below a photo of another, less noble pastrami sandwich. It was OK, it had pastrami, it was on toasted rye... but please. Lunch in Hackensack at the Heritage diner. Not Katz's. Not bad, mind you, but not Katz's. At all. 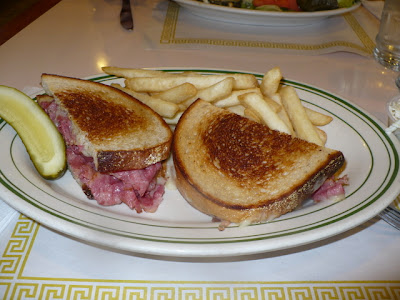 If this post seems a bit nostalgic, it is - I'm leaving New York on Monday and going back to Europe. But here's the clincher - I am only going for ten days. Three days in Crakow, Poland, a week in my home base of Budapest, and then right back to New York. So this is not farewell to Katz's. No. This is more like see ya next week....
Posted by dumneazu at 8:47 PM

Been forwarded this article - nice to read ya. Come back, and drop me a line please; this may interest you.
mynyco.com/katzs_thatsall