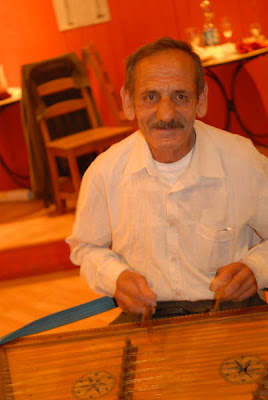 Sad new arrived this week. My good friend and musical collaborator, Mihailo Csernavec, known to us as “Misha” passed away at his home in Tjaciv (in Hungarian: Técső) a Hutsul village in the western Ukraine near the Hungarian and Romanian borders along the Tisza river. He was 60 years old. [All photos by Fumie Suzuki.] 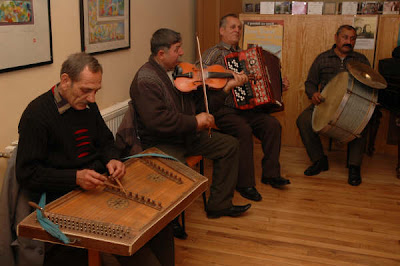 Misha was the tsymbaly (small cimbalom) player for the Técsői Banda, a traditional Hutsul band that has been playing in Hungary over the last few years through the work of Ferenc Kiss of Etnofon records in Budapest. The Técsői Banda identify themselves as Hutsul or Ruthenian more strongly than as Ukrainian. Their language is closely related to Ukrainian, but for most of their history they lived reather isolated in the higher Carpathian mountains in areas controlled by the Austo-Hungarian empire. Ruthenians in Slovakia, Poland, and Byelorussia call themselves Lemko or Boyko. The Hutsuls live farther south, spilling over into the Romanian regions of Maramures and Bukovina. 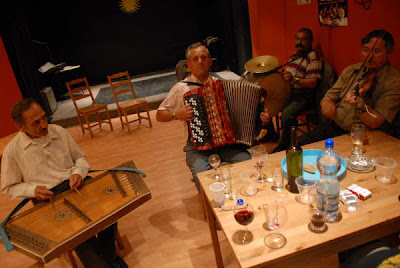 They were of great interest to me because they are one of the last bands that maintain a repertoire of Jewish tunes from Maramures and Zakarpatia, and are still called to play for the Jewish community in Munkács (Munkachevo, Ukraine.) I’ve known them for about ten years, so when my band recorded our new CD, I invited the Técsői Banda to join me as guests on some of the cuts playing the tunes I had collected from them. 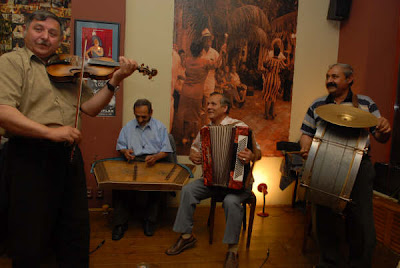 The Técsői Banda was formed around the dynasty of the sons of Manyo Csernavec, a gypsy fiddler whose repertoire was broad and archaic, as he was the preferred musician for not only the local Hutsul Ukrainians, but also for the Jews, Romanians, and Hungarians of this multiethnic region. Manyo’s sons, Josika (accordion) Misha (tsymbaly) and Jura (drum and plonka. The plonka is a flexible reed made of negative film – originally bark or a leaf – held in the mouth between the gums and teeth and blown.) Ivan Popovic, originally from Visk, married into the Csernavec family and became the fiddler. Misha was a real gentle soul, a fine musician, and a generous host who generously shared his knowledge with us and our friends such as Tim Meyen and Pip Thompson from Australia. While the Csernavec brother could all speak Hungarian, Ivan the fiddler never learned it, so we would all speak in Romani when we were together, causing Misha to really let loose with his sense of Gypsy humor. 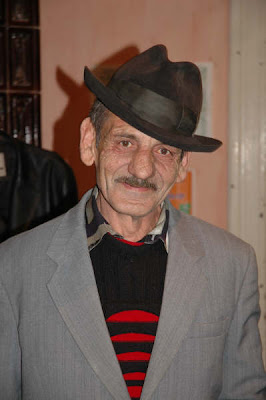 Misha was by no means the last player of the small cimbalom. The Hutsuls maintain one of the strongest folk traditions in Europe, and their lives are filled with ritual calendar events that demand the presence of musicians. One of the reasons the Técsői Banda are so good is that they actually earn most of their living as musicians playing for Hutsul weddings. In the western Ukraine, at least, folk musicians are still a necessary part of daily life. Below is a bit of video I made of the band last October at the Fono in Buda - as a trio (with Adam Good of Nikitov sitting in on bass) when Misha was already too ill to travel.

very sad to hear the news... but it's great that we got to see him play at Szentendre. thank you for the stories.

Please accept our sympathies on the passing of your friend and colleague Misha. Thank you for sharing the stories and the music...
- Lee & Chuck

May Misha and his tsymbaly be like a likht in gan eyden! So sorry never got to meet him, but treasure the recordings.

misha and his tsymbaly will be a likht in gan eyden-- i'm sorry i never met him, but treasure the recordings with him.

I'm so sorry about this; I had heard he was ill and I'm very sad I never got to hear him play...

Stefan said...
This comment has been removed by the author.
10:18 AM

I just found this old entry while searching Google for images of Hutsuls. Always sad to hear of the loss of a great musician. I really appreciate the You Tube videos of this outfit playing. A note, however, on Hutsul identity. The vast, vast majority of Hutsuls have adopted a Ukrainian sense of their national identity. The leading expert in the West on Rusyn identity, the Chair of Ukrainian Studies at the University of Toronto, Paul Robert Magosci--who is reviled by Ukrainians because he is the Western intellectual spokesman and defender of a separate, non-Ukrainian sense of Ruthenian/Rusyn identity--insists on this fact. Polls taken by him and others have shown this to be the case: the vast majority of Hutsuls consider themselves to be Ukrainian. This is NOT the case, however, with the other groups of the Carpathians--the Lemkos, the Bojkos and Dolynjany, most especially. The Rusyns of the Transcarpathian oblast of Ukraine were recognized in 2007 by their oblast parliament as distinct ethnic minority—but the Ukrainian government at large still refuses to give them such recognitio. Most Transcarpathian Rusyns are of Dolynjany background. It is also important to note that Hutsuls are not "Rusyns" proper, like the Bojkos, Lemkos, Dolynjany. Rusyns are thought to descend from the original, autochthonous East Slav population of the region, and thus have lived in their part of the Carpathians since very early times; Hutsuls, like the Gorale in Poland, are thought to be descendent of Vlach sheep herders that wandered up the Carpathians some 500 yrs ago. Their language is distinct from Rusyn dialects, as much as Rusyn dialects are distinct from western Ukrainian ones, that is. Hutsuls have been grouped with Rusyns because of proximity and because of a shared Carpathian lifestyle and musical culture. But it is also their difference from other Rusyns groups of the Carpathians that has contributed to their ease of adopting a Ukrainian sense of their identity. Really, there is no dispute over this. The great, great majority of Hutsuls have adopted the Ukrainian sense of identity. I have traveled extensively in Hutsulshchyna and other parts of the Carpathians, and can say this to be the case. Not so with Lemkos, Bojkos, and Dolynjany. And I am a full supporter of the Rusyns' right to assert themselves as non-Ukrainians, and to demand from the Ukrainian state recognition as a minority ethnic group (Rusyns are recognized officially, at the highest governmental level, as an ethnic minority in every state they live under but for Ukraine).

Your site is very nice. I share your passion for the music of this region.

Check out my Hutsul wedding videos and other videos from Ukraine at the my You Tube site here: