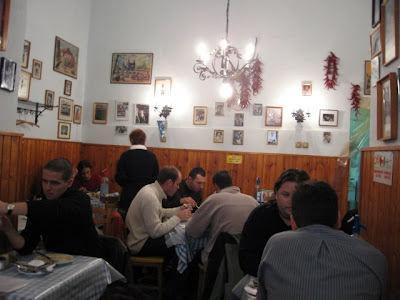 Having eaten Hungarian food all of my life, I don’t consider it the least bit exotic. I’m pretty parochial about what I like – Magyar cuisine is peasant food, and doesn’t stand up well to being “reformed” “fusioned” or “updated.” Hungarians – always class conscious to a fault and desperately eager to be trendy – might debate me about this, but when they go home to Mama’s for Sunday lunch it’s going to be sour cabbage and bacon grease or nothing else for them. Given the proliferation of strange, fusionoid and terrifyingly expensive restaurants that have popped up in Budapest over the last five years, there are few places where I can still find honest old fashioned Hungarian food. Without hesitation, my favorite place is the Kádár Étkezde on Klauzal ter, in the heart of the Jewish Ghetto. 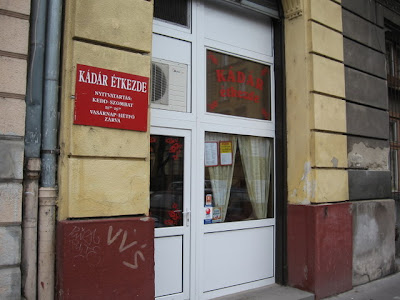 If restaurants were rated on the basis of how many uniquely oddball quirks they affect, the Kádár Étkezde would be the Peewee Herman of chow houses. It is only open for lunch. There is no real private seating – you usually share a table with a stranger. There is a seltzer bottle on each table, and you pay by the glass on the honor system. You don’t pay the waitress after your meal – you go to the guy in the white doctor’s coat standing by the door, recite what you ordered, add in how many glasses of seltzer and pieces of bread you had, and then, after paying, return to the dining room and personally slip the waitress a tip. The walls are covered with autographed photos of Hungarian celebrities of yore. It’s been like this for years. The Kádár Étkezde was one of the only private restaurants that existed during communist times, so they had to improvise the basic practicalities of capitalism, like how to pay for a meal. 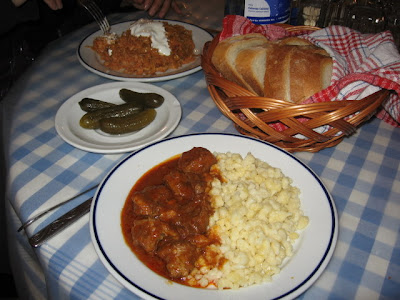 The Kádár serves old fashioned Hungarian food that never shows up on upscale menus - things like spaghetti with powdered sugar and poppy seeds, or goose wings cooked into a huge plate of rice pilaf. They have the classic communist era soft drink “malna” on the menu – a glass of seltzer with raspberry syrup. The best items on the specials list disappear within an hour of opening, and you get limited top the regular menu, such as beef stew with galuska dumplings… 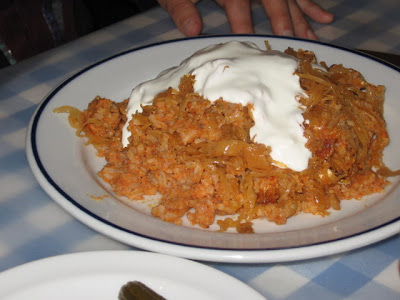 Due to the arcane rulings of Hungarian restaurant law, foods must be prepared and served on the day they are cooked – meaning that complex dishes that are best left to sit overnight, like most stuffed cabbage dishes, never appear on Hungarian restaurant menus at all. The Kádár gets round that by digging deep into the old fashioned regional cabbage glossary and coming up with things like “sloppy cabbage” or “Kolozsvar cabbage.” Ground pork, rice, sour cabbage, sour cream and paprika baked into an East European peasant version of lasagna. 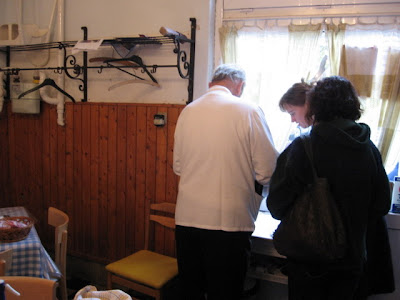 Kádár is famous for its solet – which is the local, specifically east Hungarian version of the Yiddish cholent. At Kádár it is served only on Friday, and it sells out fast. Kádár solet is served with a piece of smoked pork. Cholent with treyf? Yes. Kádár is ostensibly a Jewish restaurant, located in the heart of the Pest Ghetto, but it accurately reflects its clientele: assimilated Pesti zsidók who aren’t in the least bit kosher but who can’t live without easy access to goose pilaf or matzo ball soup. There is no sense of irony about it. Count how many of the celebrity photos on the wall are posing next to Tony Curtis. No irony at all.
Posted by dumneazu at 9:05 AM

Sounds worth a try!
Have you been to the Pozsonyi Kisvendégló? Its near Jászai Mari Tér. Huge portions of Magyar kaja and cheap. The only problem is getting a table, as for some reason this concept has caught on. And no, I don't work for them!

This takes me back. I lived in Budapest from 1989 to 1992. I never went to Kádár, but I used to go to a place a bit up the street called the "Mini", which fits the same description. There were a bunch of those places in those days.

Anyway, thanks. I'm subscribing to this now, sharing your interest in things related to food, Hungarian and Yiddish.

蔥爆牛肉Vivian said...
This comment has been removed by a blog administrator.
9:02 PM