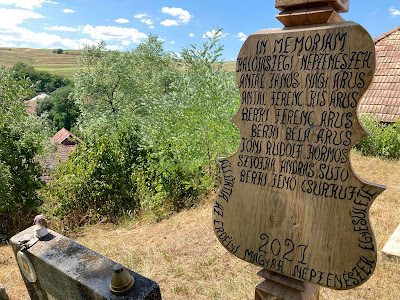 Mera is a village about 15 km west of Cluj (Kolozsvár in Hungarian) in the Kalotaszeg region of Transylvania. Mera - whose population is almost entirely Hungarian speaking - is famous in folk music circles due to the role it played in the revival of Transylvanian Hungarian folk music and dance in the 1970s Hungarian Dance House music movement (táncházmozgalom) Young Hungarians from Budapest seeking to learn Transylvanian traditional fiddle style and dance gravitated to Mera, which famous for its Gypsy musicians, the Berki family, also known as the "Árus" family. "Old Árus" died in 1975 and his son, Ferenc, moved from playing bass in the family band to playing lead fiddle as "primás" He was also considered the best dancer in the region and during the early years of the dance house revival dancers flocked to him to pick up tips on his amazing rendition of the verbunk, the men's  virtuoso dance of the Kalotaszeg.

In 1970 National Geographic published a photo book called "Gypsies: Wanderers of the World" by photographer Bruce Dale. Dale accompanied British Romany Clifford Lee on a journey from England to India, producing some of the most striking photos of Roma people I have ever seen. I was around 14 years old when I stumbled across it in the school library and was entranced by one photo of a couple dancing to an older fiddler on a hillside in a village named "Mera."

That photo told me that someplace out there in the world (i.e., not in Teaneck, New Jersey) there were communities of people for whom traditional music and dance were a vital part of life, a life I needed to know more about. Around that time I first began to play the fiddle. In  Budapest in1973 my Uncle Jozsi bought me a Czech violin for the equivalent of $14 and a boxed set of Hungarian folk music from field recordings. I spent the next fifteen years becoming a fiddler of sorts: I mostly played Appalachian and old-time American fiddle, but driving me all the while was a passion for the thick, ancient sounds of the Transylvanian fiddle music I had heard from that boxed set. In the pre-internet world Transylvanian music was not easy to come by in the USA. I found mine from LPs in Hungarian language bookstores and in the archives of the NY Public library research division. It was this music that drew me when I moved to Budapest in 1988, and it was in October of that year that I first got to travel to Mera, After Ceaucescu fell in 1989 the musicians from Mera were allowed to travel to Budapest, and I began a deep  friendship with Berki 'Árus' Ferenc - Árus Feri - that lasted until his passing in 1996, which I have written about here.

In Mera I basically apprenticed with Feri, who was 30 years my senior, but I never mastered the full virtuosic Kalotaszeg style. When I began looking for specifically Jewish music repertoire, Feri accompanied me to visit all the older fiddlers around Cluj who had played weddings with his father - "Old Árus" - before World War II. Mostly I hung with the family and learned to speak their local dialect of Romany. And it dawned on me for the first time: Feri and his wife, Rozinéni were the couple dancing with Clifford Lee in that 1969 photograph taken by Bruce Dale. That made this summer's Mera World Music Festival even more interesting: Bruce Dale was invited to exhibit his photos in the village during the festival. (Dale has been revisiting communities that he had photographed in 1969 and connecting with some of the people he met fifty years ago.) I was there to play Jewish music with Craig Judelman's Klezmer Kapelye, the band I had played with in Germany in June. Its an interesting concept: Craig sings a lot of Hasidic material and rare Litvak Yiddish songs, but the band uses a classic old lautar rhythm section, with the cobza (me) standing in for the bass alongside cimbalom, played by Shaun Williams - the American ethnomusicologist widely known in Bucharest music circles as the lautar accordionist Jean Americanu.

Craig shared fiddle duties with Zoe Aqua, who by now counts as a local Transylvanian musician. Zoe has been doing a Fullbright research fellowship in Cluj studying the ways in which Transylvanian music is passed onto younger generations, and she has been learning from some of the old and not so old masters like Ioan "Nuku" Harlet and Florin Kodoban. 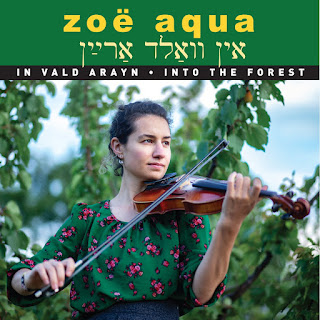 Zoe also just released her own CD, "In Vald Arayn" in which she mixes what she has learned about Transylvanian band playing styles with old style traditional Klezmer and comes out with something amazingly new. It officially came out just as we were driving around in Transylvania so we had it on the car stereo all the way to Mera. While we were in Mera I checked in with some of my old acquaintances from the Berki family.

Feribacsi's grandson Árpi was the apple of his eye: Árpi's mom had left to work in Hungary, basically abandoning him as a child and he was raised by his Grandparents. Feri had hoped Árpi would take command of the Mera band, but between the stiff competition among fiddlers and Árpi's need to work as a shepherd in the high pasture stana outside of the village, combined with a passion for women, partying and shitty tattoos...  his musical talent was never quite tamed.

Back in the summer of 1999 I bought an old fiddle at the Cluj flea market and gave it to Árpi in hopes that he had the stuff to become a primas.  Unfortunately, Árpád, known as Pipi - never rose to the level of leading the village band, and suffered from a series of misfortunes in his life, the most recent of which was a pit bull terrier attack this summer that chewed up his leg and his butt so bad he nearly died. 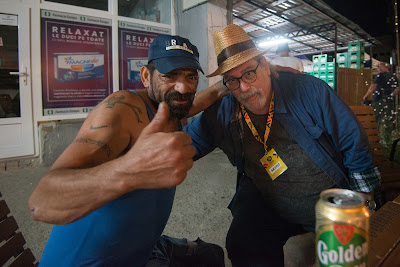 Every time I meet Pipi my heart breaks - I remind him of his Grandfather and he starts tearing up and turns to me for advice he never takes on how to get his life in order. One of the reasons I stopped visiting Mera after Feribácsi passed away was the simple fact that even as a quasi-adoptive family member, there were expectations that I could preform economic miracles. While Rozinéni was alive we tried to take good care of her - taking her to doctor visits in Cluj, trying to get her eyes fixed, helping out with the bills.

But after she passed I didn't return to Mera for nearly 20 years. Until the Mera World Music festival called.  It is an impressive event. Held in a former barn turned into a stage, it features not only local traditional music but also a wide spectrum of names on the world music circuit - I had to miss  a few on the final day of the festival, including Craig's Old Time American band Interstate Express and the Ghanaian Alostmen, featuring the half Romanian half Ghanaian Wanlov the Kubelor. And I missed the set by Erdofu, by far my favorite Hungarian traditional band right now. And my legs are no longer quite enough to get me up the mountain to the cemetery where Erdőfú plays a memorial set to honor the memory of the great Árus musicians at their burial site. A wooden "kopjafa" memorial marker (top photo) was erected this year, but three years ago I did get the chance to haul up to the cemetery to pay my respects to Árus Feri and Rozinéni while at the festival. Erdőfú and the local musicians of Mera:  Berki Béla on accordion, his son Béla on kontra, "Kis Netti Sányi" on violin) did the honors.