Hurka: The Tastiest Turd in Hungary

East Europe doesn't offer a lot in the way of extrémé foods. We don't eat bugs, we don't find grubs and worms very tasty, and we do not to eat anything alive. This makes us a bit boring for the TV food travel shows - like Tony Bourdain's No Reservations - which tend to dwell on the portion sizes (case in point: the Pleh Csarda) and the exciting blood and gore of a countryside pig killing feast. But there is one food most visitors to Hungary and its neighbors will probably miss out on: hurka. Hurka is the dark underside of Hungarian sausage. Hurka is the lunch which dare not speak its name. Hurka haunts the nightmares of small children and vegans. Hurka is neither a polite nor a dainty food. Hurka is a culinary afterthought stuffed into a pig's ass. Unless you are invited to a pig killing feast, you are not likely to taste hurka outside of a butcher shop lunch counter. No restaurant offers it - none - and most home cooks avoid it due to its tendency to explode while cooking, splattering grease and guts around the kitchen and reacting exactly like a garden slug that has just been sprinkled in salt. Hurka is a problem food. Also, it tastes really good.

Hurka is a kind of sausage made out of spiced ground pork liver or blood mixed with rice as a filler. Hurka is not really that strange except for one thing: it really looks like pooh. This is a point not lost on Hungarians, for whom the term hurka is a polite alternative term for "turd". Hurka was the first food I discovered that could also be used as a psychological weapon against my sister. When I was growing up in New York my Mom used to take us down to the -now vanished - Hungarian neighborhood in Yorkville, on Manhattan's upper east side, to stock up on essentials like poppy seeds and paprika at the famous Paprikas Weiss Hungarian delicatessen on 2nd Avenue. 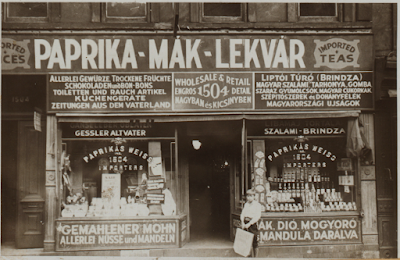 The next stop stop was at the aptly named "Valodi Magyar Hentes" butcher shop to pick up some kolbász and hurka and the wonderous thing sold there which was actual Magyar bread. The bread was unlike anything available in the USA in the 20th century... which is to say it was real bread. At home my Mom would cook up a family favorite - lecsós kolbász -  and a couple of hurkas on the side. Nobody except me and my Mom would eat the hurka. It elicited groans and cries of "ewwwww gross!" from my brother and sister, who couldn't bring themselves to taste the turdlike mix of organs and blood. The mere idea of eating a tube of congealed blood and ground pig weenie was enough to send my sister running from the table. (Update: she has since become a respected and world renowned Oncologist.) You know the saying "don't ask how the sausage is made"?  The stuff they don't use to make the sausage is what goes into the hurka.

You may ask yourself "Why were these otherwise traditional Yiddish speaking New York Jews happily eating pig privates ground with pig blood in casing made of pig intestines?" Simple: my mom was born in Hungary, and we are not orthodox Jewish, kosher, or otherwise bound for glory on tkies hameysin when the souls fly up to find their reward in heaven. When I was nine my Dad took me to City Island in the Bronx to introduce me to eating live clams on the half shell, which is about as unkosher as anything you can put in your mouth except maybe for rabbit. It was a rite of manhood, but also a guarantee that I would not adopt the ritualized eating disorders of my more observant mates... I mean, dude, you ate a living clam, for pete's sake! As for my Mom... Hungarian Jews split into orthodox and Neolog (reform) a long time before that was an issue with the rest of East European Jews, and part of the social assimilation of Hungarian Jews was the acceptance that virtually everything ever eaten in Hungary is made out of a pig. Pushing boundaries is just what we do. The origin of the Neolog movement in Hungary started in 1798 when Rabbi Aaron Chorin chose to make a foodie argument about whether or not sturgeon was a kosher fish. Today many Orthodox Jews won't eat sturgeon, yet it features in the less rigid Jewish tradition of the New York smoked fish "appetizing" shops like Barney Greengrass and Russ and Daughters.

You can go into virtually any Budapest hentesbolt - a butcher shop serving hot foods - and there will almost always be a steaming tray of grey liver majás hurka or black veres blood hurka. Most are made from ground mystery meats mixed with rice, but you may see some labeled "Svab hurka". For some reason, the German speaking Schwabians of Hungary - most of whom were deported to Stuttgart after WWII - preferred to mix their mystery meat with bread crumbs. Those crafty Svabs... what will they do next? Either way, most commercially made hurka is insipid, oversalted, and usually dried out by the time it gets served. Never buy hurka from a supermarket meat refrigerator. Most of the hurka available today is made in factories, and is a rather banal and usually too dry and salty ghost of what a good guts'n'organs'n'blood sausage should be. Worst of all they are often kept warm under infared lamps which dries them out into a sandy, dry, unpalatable bit of pooh in stick form.

The search for a good, locally made artisanal hurka is never ending. The best was once found at the lunch stand run by an old guy named Palibacsi who made his own organic meats on a farm north of Budapest and for a couple of years his lunch counter at the Klauzal market was easily the best place to experience Hungarian food in Budapest besides the also now defunct Kadar Etkezde, located four doors down from the market. Today, seek out private butcher shops and look for misshapen, odd looking, and juicy hurkas that defy commercial sizing and try your luck. Hurka and other meat products sold by peasant stands at big markets or smaller farmers markets like the one at the Sunday Szimpla Piac or the Czako kert are a good bet. The lady who brings homemade bacon and smoked meats to the Klauzal market on weekends has good hurka, but it sells out fast. At home you can bake them in an oven (in a tray with a bit of water) or fry them at low heat in a pan, but either way they tend to explode while cooking. If you have the time, try soaking them in water for an hour or two before cooking: it helps the skin resist exploding. 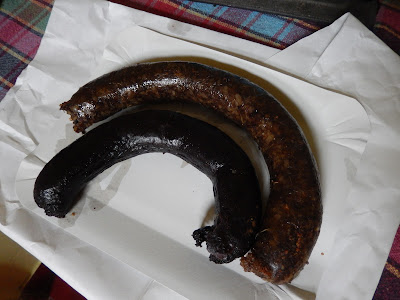