This year has been a very, very good year for pork. Mr. Pig, the provider of the other white meat has provided us with may excellent meals spanning many widely divergent cuisines this year, and as my budget allows, all of them have been in the affordable to dirt cheap category. I like pork. There, I said it. I like pork with the like that dare not speak its name, the affection that only comes from having avoided pig meat for something like fifteen years because, well, God told me not to eat pork. Yes. I was a deist pork avoider for many years. I am not a religious man. I am a basic simple Jew. For years I shuddered at the mere idea of eating pig meat. I don't observe orthodox practice. I rarely square off on questions involving "faith" although in my case the main modern theological questions consist of "should I order the ham sandwich?" and " you mean like, no bacon?" For many years I did not eat pork. I wasn't exactly kosher, but like a lot of my tribe, I drew the line at piggus scrofus, the lowly porker. The pig was off limits.

That changed when I moved to Hungary, where pork is the main meat, eaten three times a day and in the afternoon there is even a snack called "bacon time" in which guys pull out long pocket knives and hack away a slab of smoked bacon to get in the mood for a bit of evening drinking. If you go to Heaven, you eat what the Angels eat, right? In Hungary, the Seraphim and Cherubim chow down on sausages and smoked back fat. To paraphrase Homer Simpson, if God did not want us to eat pork, then why did He make it taste so good? And why would he give us such a wide selection of pork products to choose from? What kind of perverse and vengeful deity would dangle jionts of smoked pork hock and juicy links of Debreceni sausage in front of your face and then tell you not to eat this? Forget all those vexing questions of "why art thou forsaking me"... just answer me this: why did you make Spam such an addictive snack?

So there, I admit it. I am no longer eating kosher. Nope. Like those Sephardic Marrano Jewish poets of the fifteenth century, I extol the dripping lard that runs down my beard and gives me away as a sausage eating Jew. I admit it. Actually, a brief skim through the earlier entries of this blog would also confirm my rather public consumption of pork, but... heck, I have come to appreciate a juicy bit of khazzerei. And where else but Hungary will you find \pig meat in all its glorious porkographic splendor? Another good thing about pork: it is cheap. Maybe not in the chiochi places you eat, especially in the US where pork was relatively rare outside of the south and Puerto Rican neighborhoods until recently, but in east Europe pork is the lunch meat of those of us who want to go carnivorous for lunch on a budget.  Let's start with the normal stuff: this is what I ate for lunch for many years while working in downtown Pest. Pork stew on galushka dumplings at a stand up lunch window in the Rakoczi ter market.

The Hungarian forint has inflated, but at dollar rates it remains the best three dollar lunch in Europe. Three bucks is also the going rate in next door Slovakia for a lunch plate of halushky. Notice the linguistic proximity to the Hungarian galuska. Yes, they are both pronounced almost the same way. Yes, they are both basic pastas made of flour and eggs. But the Slovak national lunch means dumplings covered in sheep cheese and bacon. Yes, fry the bacon bits and pour the hot grease and bacon all over the melting cheese. It's good for you!

This is lunch. In Slovakia. For three bucks. There are many reasons to love Slovakia. The fact that it is nearby and offers good trout fishing is the main draw for me. Buy when I am there I manage to both fill up my trout quota and my bacon quota for the year. Slovak food is closely related to Hungarian cuisine, with an emphasis on honest, peasant starch based dishes featuring potato and pig. If it consists of spuds and porker, you can be sure the Slovaks will make a hefty dinner out of it for under five bucks. But the best local option for a good plate of pork is to make it at home, and this is when I really appreciate living in a neighborhood with a good market. Pigs head is a regular offer at my local market, which has two butchers who specialize in offal and bits of animals that would normally be offered to cat food manufacturing concerns. This wonderful slab of snout and head went into a home made souse last winter. Total cost: about four dollars. 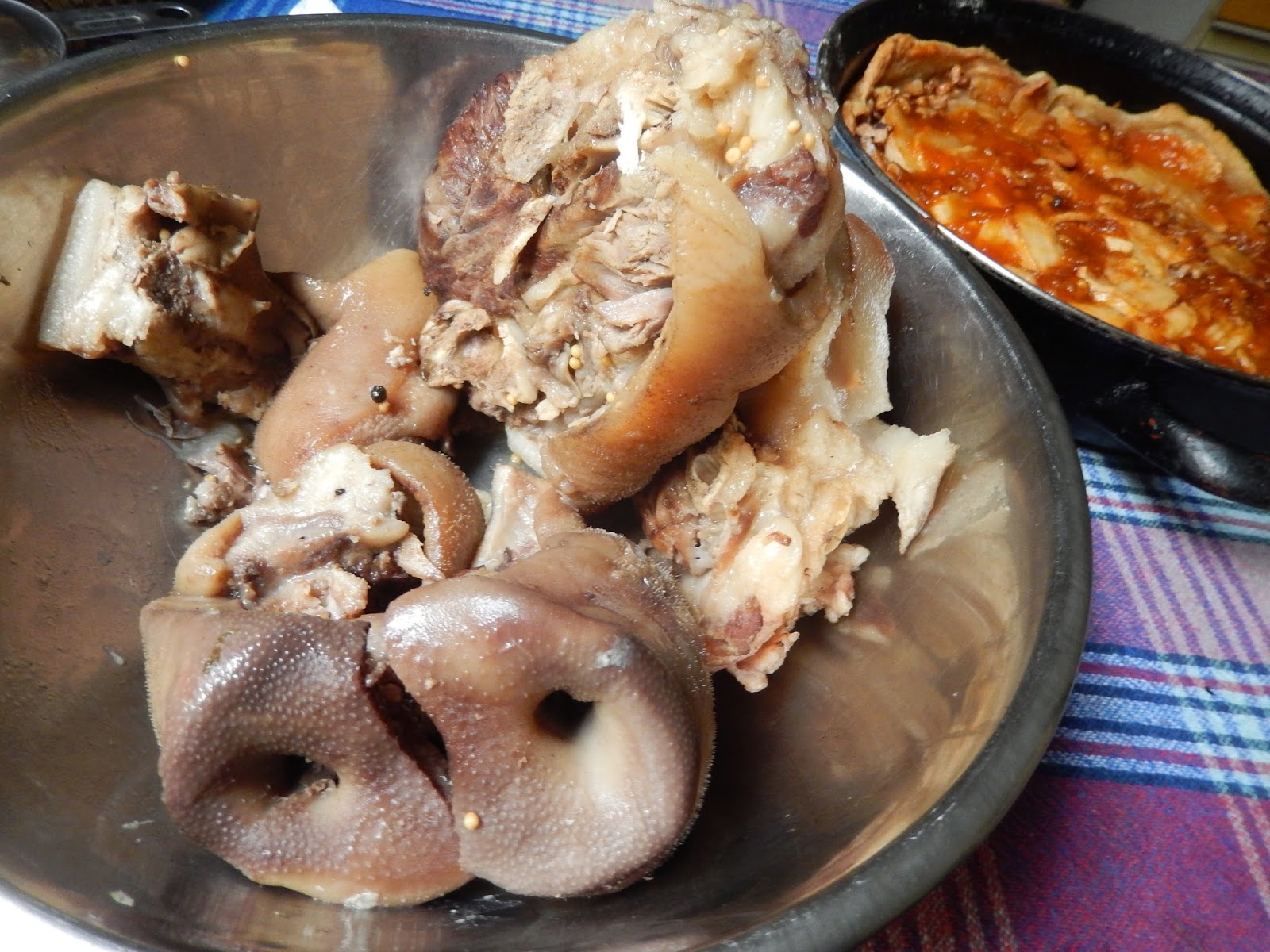 One of the first things I notice when I come to Hungary or anywhere in east Europe after traveling to the United States is that the pork here... tastes like pork. To which my American friends can argue about artisanal pigs, and free range pigs and all kinds of pigs but the pork uniformly tastes like cardboard in the USA - in the states I stick to beef. This summer I will be back in Romania, which offers some of the best pork in the world: similar to Hungarian pork, and often prepared by Transylvanian Hungarians themselves, but somehow porkier, piggier, somehow more swine-a-licious in flavor that the stuff we eat in Budapest. This is a plate from the incredible cabbage and pork specialty restaurant in downtown Cluj (in Hungarian: Kolozsvar) in central Transylvania known as the Varzaria, or "Cabbagerie" This is one of the best plates of food available in Europe - by a mile - and that includes Northern Italy, Paris, much of Portugal and Fife's place in Split, Croatia. This is what Jiro would eat if he wasn't dreaming about making sushi in a Tokyo subway passage. This is Pig heaven for under five bucks. 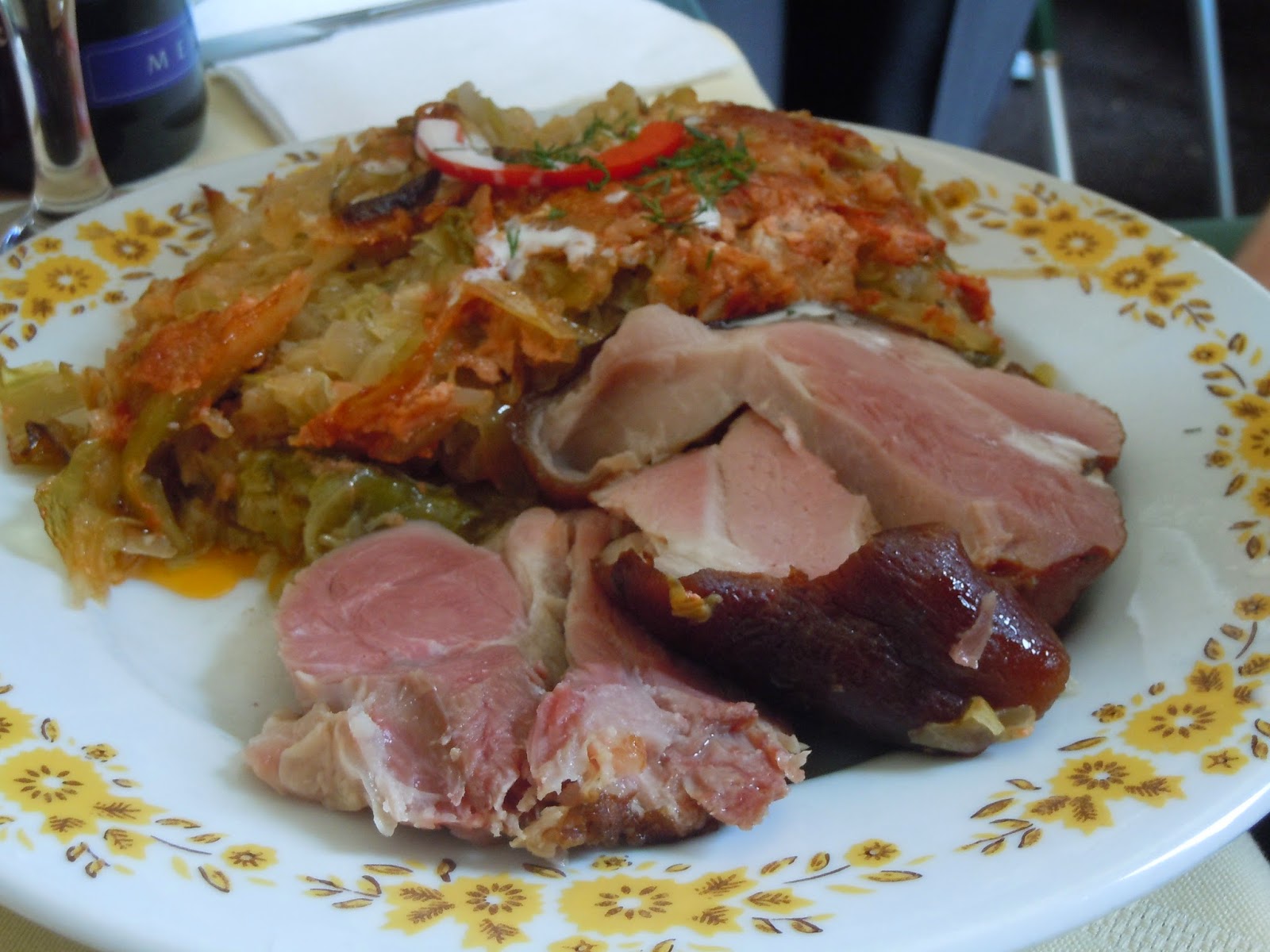