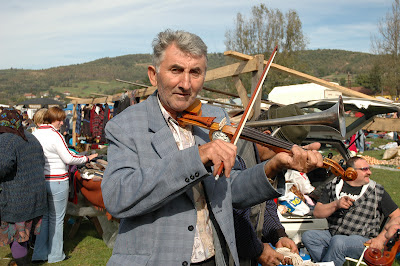 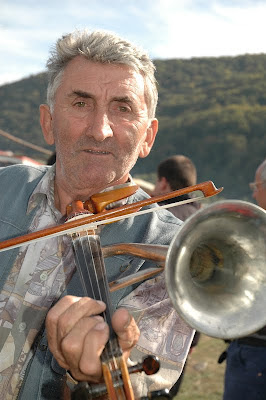 You can see the pride in place that these people have, something Romanians really treasure, a sense of home and hearth and continuity that transcends a single lifetime. Dorel gave us something, he gave his culture something, and he gave his family something very special. He was a good man. And I will remember him everytime I hear those tunes. And Although Dorel has passed on, I will go back, because it is not just music that draws me to Transylvania, but the people. The ones I can proudly call my friends.
Posted by dumneazu at 7:49 AM

Sorry to hear that.
I've been on the lookout for a viora cu goarna for a while, they come up on okazii.ro occasionally but no-one will post abroad (I'm in Britain). Any help in finding one would be gratefully received.
Jon

R.I.P. Mr Codoban. Sad news indeed. I have a documentary on him - he was a really down to Earth guy.

I just crossed a street musician playing one here in Bruges, and talked to him about Codoban.

so sorry for his passing. the entry is beautiful tribute - thanks so much for writing it.

I was told to contact you by Joris van Beek from Ot azoj. I am a fiddle player living in budapest right now. I am learning hungarian and romanian folk music and play in a swing and folk band. I was thinking of getting a trumpet violin, and there are some here in budapest at a folk store, they are about 400 euros, but i dont know if they are good or not. Also do you have recommendations for folk camps this summer?

to be honest, that instrument is kinda weird but i still want to hear its real sound..