The fair at Negreni is one of the main gathering places for the distinctive music of the Bihor and Crisana regions of Transyylvania, and fiddlers get together to trade tunes and maybe pick up a new vioară cu goarnă, (dialect for "violin with a horn") the "trumpet fiddle" of Bihor (called "tölcseres hegedü" in Hungarian.) 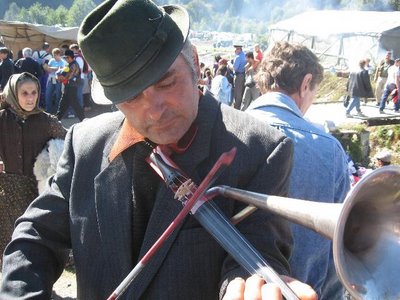 The vioară cu goarnă is the bastard child of the stroh violin, a hybrid resonator violin developed in the early 20th century in order to allow violins to be recorded by the primitive technology of early gramophone recording studios, which did a pretty bad job of recording violins. By setting a resonator (like those on a dobro or national guitar) under the violin bridge, the string vibration is carried to a metal or vinyl membrane, and then out through an attached horn, often butchered from an old bugle. They are made locally: here's Doctorul Pom Collins in Bratca examining the psychedelic white vioară cu goarnă that I bought from Mihaly Rostas last June: 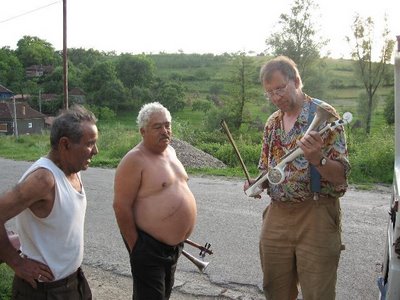 The result is singularly loud and severely directional. If you stand in front of the fiddle, it sounds like Jimi Hendrix playing with feedback. If you are just off to the side you can hardly hear it, so the fiddlers swing their bodies around while playing, to get a wild wah-wah doppler effect. If you are behind the horn, as in playing it, you can barely hear it all. Mircea Rostas was at Negreni selling fiddles again, along with his wife and Traian Ardelean, one of the best Gypsy players. You could hear then a half a kilometer away. 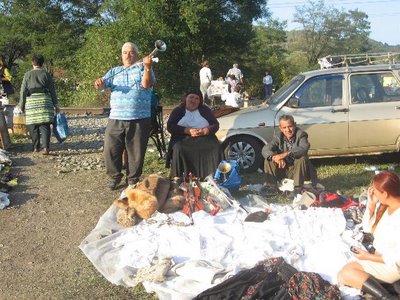 When played well it is the only fiddle that can overpower an accordion, sax, and drum band outdoors, without the help of any form of amplification. 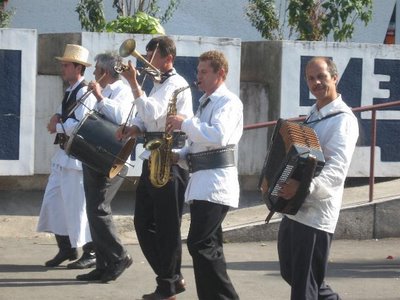 No one really knows how the stroh violin got to Romania, but legend has it that it was brought back by Romanian emigrants from north Dakota returning to Romania. In the 1930s the Great Depression was in full swing, and Romania was one of Europe's wealthiest economies, so a lot of Romanian immigrants came back, bringing the extremely loud stroh violins, and soon local musicians were copying them. Today, Dorel Cordoban from the village of Lazuri (near Rosia) is one of the best makers and players. He still prefers to tune his fiddles in the traditional local way - the G string, usually the lowest note on a violin, is replaced with an A string tuned up an octave to high G. 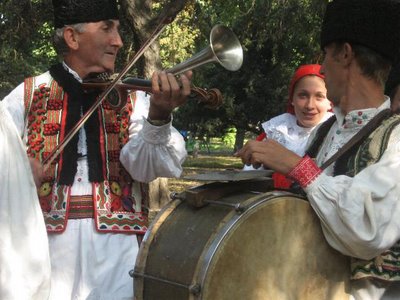 I've known Dorel and his family since 1990, when they were one of the first groups of Romanian folk musicians to play at the Hungarian National Dance House Festival, and they stayed at my apartment then and many other times afterwards. When Fumie first came to Romania with me, she bought her entire winter wardrobe from Dorel's wife Florica. They are a wonderful couple who really enjoy life and never travel without some of their best home-brewed plum brandy. In Bihor, pálinka accompanies every social event. As you can see, Florica is very proud of her pálinka. 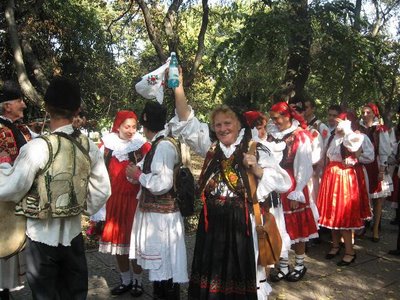 Dorel invited us to a local festival in Oradea the day after Negreni, and it turned into a huge parade of Bihor folk groups dancing around the city center, with Florica and Dorel and the villagers of Rosia leading the parade. 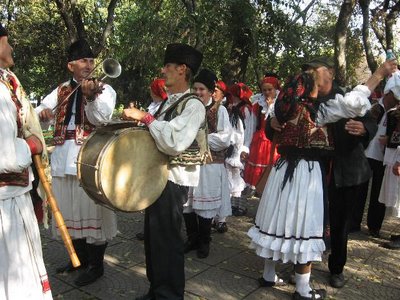 To hear the sound of the vioară cu goarnă try a few of these links (click on the link to go directly to MP3 media files.) From Prof. Robert Garfias' excellent Ethomusicology Kiosk Page there is a whole page about Bihor Music, including one cut on vioară cu goarnă, the Maruntel Din Valani. The Fono, a Hungarian cultural center, sponsored a series of Transylvanian village bands several years ago in the Utolso Ora Series ("Last Hour Series" reffering to the small amount of time left to hear such music. Their website is in Hungarian, but if you go to "terkép" and click on the map, you can eventually navigate your way into hours of Transylvanian traditional field recordings from all of Transylvania's ethnic groups.) They included some music played by Sumalan Stefan, from Halmosd, including a maruntelu, a classic învârtita and a jaunty schiopu. There is also a video RAM file of Jelu Covaci (who was also at the festival in Oradea) at the French world music magazine website, Mondomix.

UPDATE (2.21.2007) Several short videos of vioara cu goarna being played by Ghica and Dorel can now be found on my Youtube page.

Here is a link with detailed directions to Dorel Cordoban's house:

i have been trying for years to find this fiddle. i own thai copy of a stroh fiddle but i like the trumpet style sound much better. can someone please let me know if they know how i can find one to be shipped to the US. i know one place here distributes them but they are too high priced..850 or so. thanks...

@Andrew I`m from Bihor areea, where this are made, and trust e is really hard to find someone who sale on of those stroh fiddle`s here. First becouse there are not shops or factory who make them, and secondary coz ppl who use them are verry tached to them. I dont think is much more then 300 $, old one ofcourse, but i`ll search for if are u still intrested. let me know . Shalom

Hi, I willbe in Negreni sunday october 19 this year 2014. Looking for one too... Who can be of any help?
Hilde