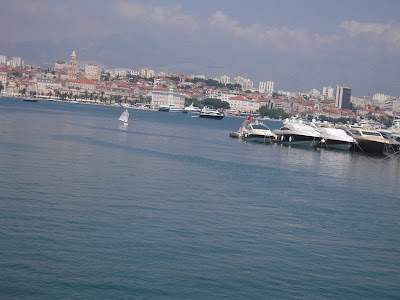 Starting out at 6 am in the morning from Budapest we hopped a train to Zagreb, Croatia, and a 3 pm connecting train from Zagreb to Split on the Adriatic coast. Budapest was getting too rainy and Hungarian politics was turning more antic than usual. For a week, every time the new government spokesman for FIDESZ opened his mouth about the economy the forint would drop. The newspapers were gauging how much each Hungarian lost with each subsequent statment. People were watching their summer vacation savings erode with each imbecilic pronouncement as the world realized what we knew months ago - our new governemnt has never had a clue as to how to manage an economic crisis. Poor Magyars. Hungarians love to go to the Croatian coast during the summer, and a lot fewer are going to be able to go this summer. Luckily, we had a bit of work to get us there, and our friends Camille and Dejan (La famille Squidovič) now live in Split. 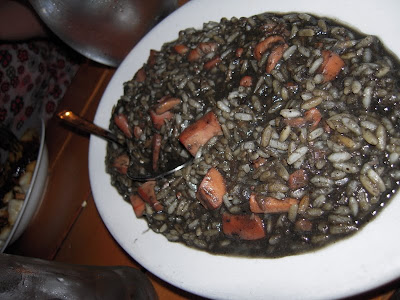 We arrived late but still in time for dinner at our favorite konoba, the Fife Buffet at the southern end of the Riva. They are locally famous for "Good food and bad service" as they advertise on TV. Black cuttlefish rissotto, grilled fish, shots of travarica. After a grueling train journey nothing goes down better. In the morning we headed straight to the Split fish market to stock up on the one thing that we absolutely can never get in Budapest: fresh fish and seafood. Hungarians eat carp, and lots of it, but most find the taste of ocean fish strange and unpleasant and apart from a few pricey restaurants, you won't find fresh seafood anywhere in Hungary. 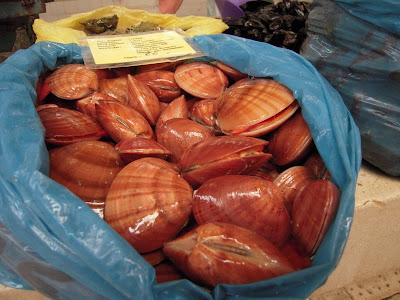 Which is why we gorge on it in Croatia. We picked up a few of these adriatic clams, and yes, I will eat them raw on the halfshell in a triumphant gesture of Bronx-born seafood bravado. Croats will eat anything that swims or crawls in the sea, but not everybody goes all the way... I found whelks at one fishmonger for 20 Kuna a kilo, and we made them in two ways: boiled in salted water and grilled in their shells, Japanese style with soy sauce. 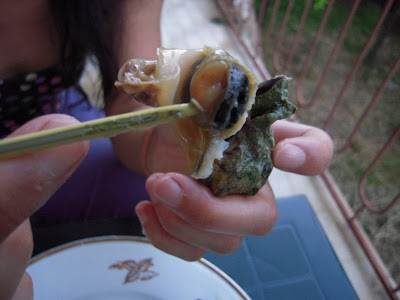 Essentially sea snails, whelks have a deeply oceanic flavor, slightly bitter, and chewy meat, and you want to avoid eating the grey internal organ bits. This rivals my winter experience eating raw sea cucumber and sea squirts at a Korean restaurant in New Jersey. By now I've basically eaten all of the grossest seafood there is. It's all downhill from here. 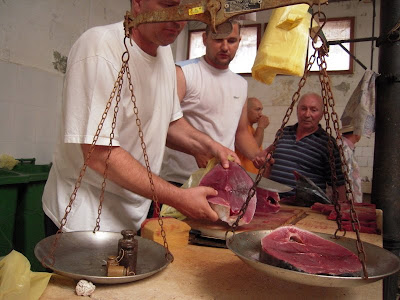 Fumie needed tuna, and she needed it badly. These big adriatic bluefin tuna are probably wild caught, but there are a lot of fish farms in the islands where live tuna are fed and raised for the Japanese market. The price of this tuna was about four times less than a similar piece of tuna would cost in Japan. 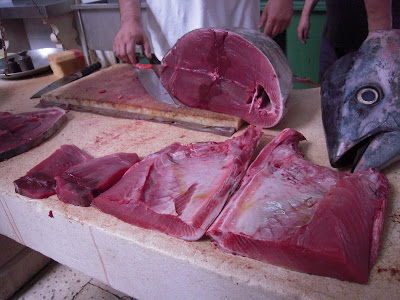 The fat belly meat of the tuna commands the best price in Japan, but here it is just another bit of fish, likely to be sliced thin and served marinated in tuna carpaccio. We took ours and made tuna sashimi (we brough our own wasabi and Kikkoman soy sauce - which are not available in Croatia) and some tuna steaks. 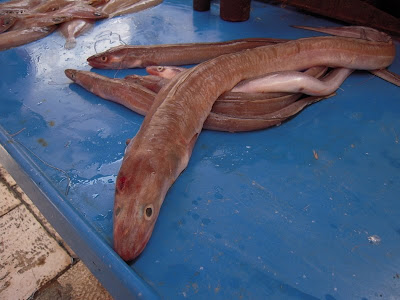 Conger eels are used in fish soup. They have a rich white meat and a kind of sad face. We might try a fish stew party before we leave, since Camille has become the undisputed master of mediterranean fish cooking since she moved here. French chef + Croatian fish = happy food. Such as her octopus salad with fresh broad beans. Tasted as good as it looks. 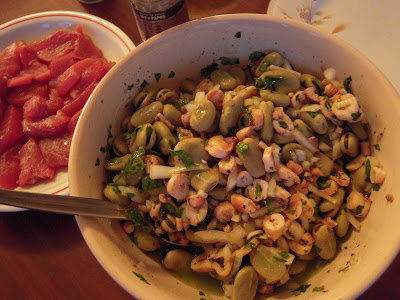