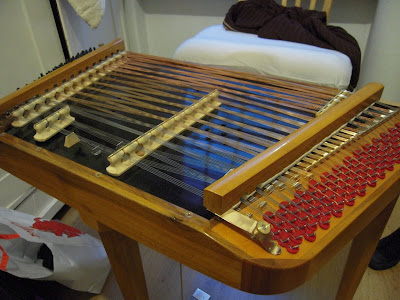 Over the years this blog has followed my fascination with the cimbalom, an instrument so devilishly diffficult and ungainly that I happily pay other musicians to play it instead of myself. Yet over the years I have learned to play at a basic level in order to intelligently inform my cimbalom player about stylistic points and things I want to hear when we are playing in styles other than Hungarian cimbalom - mainly Klezmer and Romanian. These are cimbalom styles that, traditionally, were played on small cimbaloms, known in Yiddish as tsimbl and in Romanian as ţambal mic. This month Australian cimbalom player Tim Meyen was in Budapest to pick up a new small cimbalom made by Akos Nagy, the indisputed master of modern cimbalom making. A couple of years ago Akos and I worked on designing a quality cimbalom for students and beginning players of klezmer music who needed an instrument that would be both affordable and satisfy Akos' rigid ideals of what a quality instrument requires to play and sound well. (Basically... no cutting corners, which meant no making it less heavy...) It seems that Tim is the lucky fellow who got the firstborn of the lot. Great sound and a lot less weight! 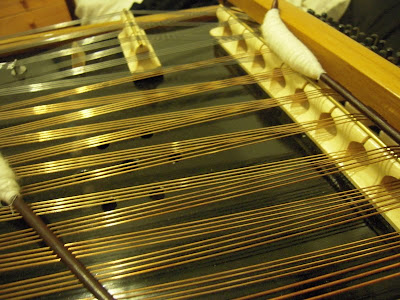 Tim ordered a few custom specifications above the basic level of instrument, such as brass strings on the middle courses, which sound brighter and stand up to a good beating. He also had legs and damper pedals included which would be left out of a basic student klezmer model designed to be placed on a stand or table to be played in the traditional manner. I tried this out and yes - it can play almsot the full range needed for all but the most vituostic cimbalom parts used in east European folk music. Unlike my Romanian Hora factory small cimbalom, the higher notes are clear and distinct, the instrument holds a tuning perfectly, and it doesn't look like and 11 year old constructed it out of cigar boxes. 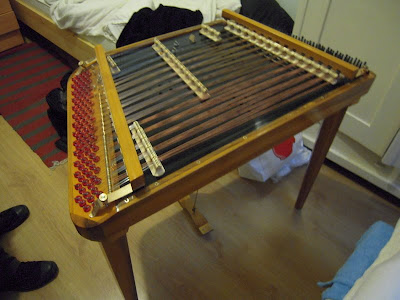 Tim is spending a few months in Romania doing more field research on cimbalom players, but while he was in Budapest the Técsői Banda was also here from the Hutsul region of the western Ukraine. We went out together to the new Gang garden bar on Csengery utca to hear their farewell gig. And more small cimbalom... soon another mutual friend of the Técsői Banda, Shaun Williams, is due in town to pick up his Akos Nagy small cimbalom... looks like a virtual blizzard of small cimbaloms is in the air this year. 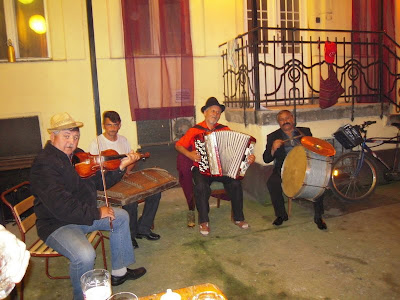 Do women ever play cimbalom? Is there any impediment to a woman becoming a player?

zmkc: Women cimbalom players were not rare in Hungary and Romania, and quite common in Czech and Belorussian music groups. Warsaw Village Band from Poland has a woman tsymbaly player. The only impediment was that cimbaloms were usually owned by restaurants and bars, not by the individual musicians, so young women rarely had a chance to practice informally unless they wanted to hang around in a very macho atmosphere.

When I went to a cimbalom conference Belarus in '97 almost all the players of Belarussian tsymbaly were female but these were people who learned through a system of music schools and conservatories rather than as traditional 'folk' musicians.

thanks for the overview of the instrument. I'm jealous :)

I wonder how the brass middle section compares in terms of string gauge to steel.

Hello, I am a cimbalom player, could you send me any files for hear better your instrument?*What s the price of your little cimbalom?
Thank you
W/A