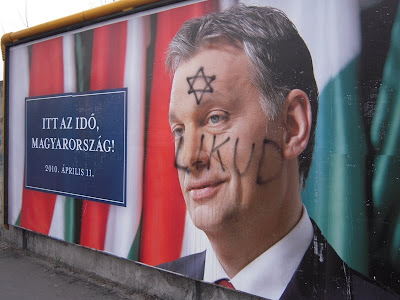 It is election day in Hungary. Readers of this blog may notice that I rarely mention Hungarian politics here. There is a good reason. As anybody who knows me can tell you, I love to talk about politics, especially late friday nights in a bar with my journalist buddies. I read about three Hungarian newspapers a day and as many websites. I write extensively about Hungary. But I do not publish in English on the topic of Hungarian politics. It is a simple matter of self-censorship. Hungarians have memories like elephants, and if you publish a word against a political party it will be remembered and resented for decades. And I have been here for over two decades, so I know better than to stand in the line of fire. Politics in Hungary is a brutish and nasty business, one best expressed in short bursts of outrage. And since there are relatively few English language blogs coming out of Hungary, I long ago made a conscious decision not to comment on politics here. But to give you all a taste of the low level of discourse that has characterized this recent campaign here are a few photos of campaign posters taken around my modest outlying neighbrohood of Zuglo in Budapest's 14th district. The photo above is a FIDESZ poster featuring the face of FIDESZ, Viktor Orban, defaced with a star of David and the name of the Israeli party Likud. This is obviously the work of some right wing Jobbik party activists - it is pretty hard to imagine FIDESZ, which has a long history of antisemitic rhetoric itself, being controlled by Israel. 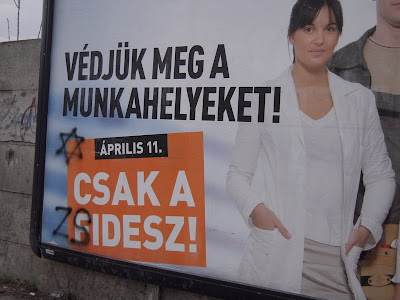 This poster's slogan "Only FIDESZ!" has been changed to "Zsidesz" - sort of "JewDESZ" from the Hungarian word for Jew: zsidó. Again, probably the work of Jobbik supporters. Jobbik came to prominence on the basis of antisemitic and anti-Gypsy rhetoric, and gained wide support for their formation of a paramilitary wing, the Hungarian Guard (Magyar Garda) which has been outlawed, but immediately returned unpunished. I would like to say, that in showing these photographs, this does not mean that the majority of Hungarians express these kinds of views. The Jobbik Party are expert in using an advanced understanding of negative communication strategy to gather support among a percentage of Hungarians who are both frustrated and ignorant enough find their extremism attractive. March around in uniforms closely reminiscent of the Nazi era Arrow Cross, use a flag closely copying that of the Arrow Cross, and then tell your supporters that the Jews Who Control Everything have commanded their press minions to label all Hungarians 'Nazis.' Classy. Real classy. But, for about 20% of the populace, very effective. 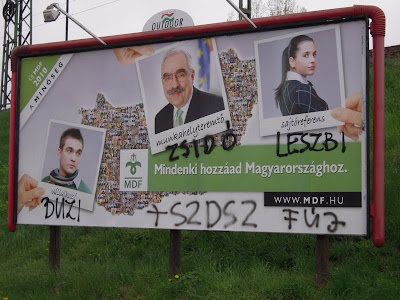 This poster is one supporting the MDF, the center-right Hungarian Demorcratic Forum, which was the ruling party in the first post-communist Hungarian governemnt coalition after 1990. The graffitti labels the young man as "faggot" the young woman as "lesbian" and MDF candidate Lajos Bokros as "Jew." And for good measure, it adds "+SZDSZ boo!" The SZDSZ (Free Democrats) was the liberal party that had its roots in the intellectuals who published anti-communist samizdat literature in the 1970s and 80s. They are not really even running candidates in most districts, and we only saw one poster for SZDSZ in all of Budapest: 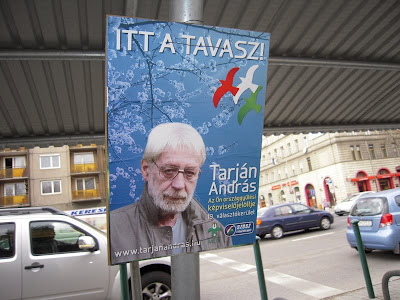 Now, is that the saddest looking political poster you have ever seen or what? The SZDSZ may be the saddest of all the poltical parties in Hungary. Their party split over the rigged election of their own party leaders, and they sat quiet while their coalition partners, the Socialist MSZP, looked the other way while tolerating internal corruption on a scale that would make even a New Jersey congressman blush to see. Then, basically, they gave up. They stopped getting out of bed and walked around their apartments in pajamas all day and never went out and started drinking margaritas at noon. Sad. Especially for a liberal political party. So sad. 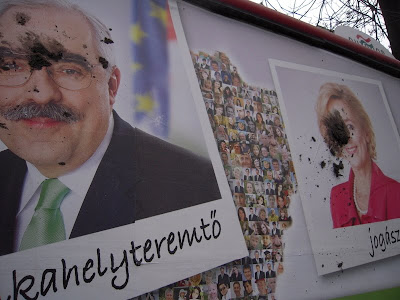 Here's another MDF poster defaced by literal mudslinging. In Hungary we sling mud the Old School way. With mud. Of course, there is the spanking new party called "Lehet Mas a Politika" ("Politics can be different") and of course, having come out of nowhere with no background, nobody is really sure what they support. This poster says "cleaner city air" but could just as well be advertising a return to WWI gas warfare. Politics can be clueless as well. 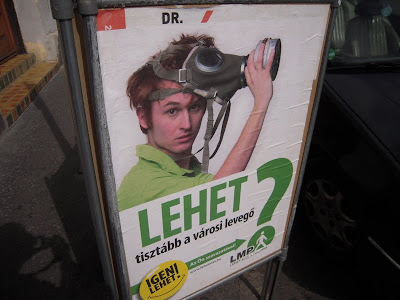 Of course, tarring your opponent with the label "I am an Alien Vampire Intellectual" really addresses the pressing issues in a time of economic crisis. 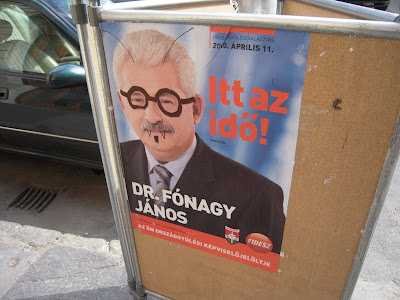 Hungarians do not like Hungarian intellectuals, and having met far too many of this species, I can almost understand why. Intellectuals always rank just behind skinheads and Gypsies in opinion polls of groups most despised by Hungarians. The Socialist party (MSZP), which has governed through the last two election cycles, is expected to come in at a weak second or third place. Their weakness was that they could never curb the inclination to take kickbacks and swim in a sea of corruption. This only fed the oppposition rhetoric of their equally greedy political opponents FIDESZ at time when the country desparately required good leadership. Of which there is not much to go around. 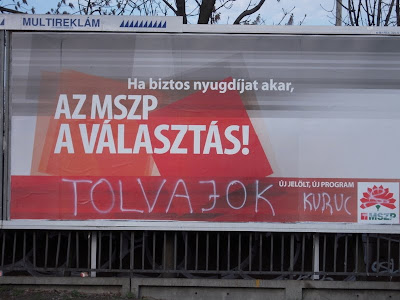 The graffitti says "THIEVES!" and is signed "kuruc." Kuruc is the web portal for all things Hungarian neo-nazi, and is closely allied to the Jobbik Party - I won't link to it but you can find it on the web. If you read Hungarian be warned that it is really rather repulsive in a way you don't even see on many English language neo-nazi sites. But, the opponents of Jobbik are able to give as good as they get: 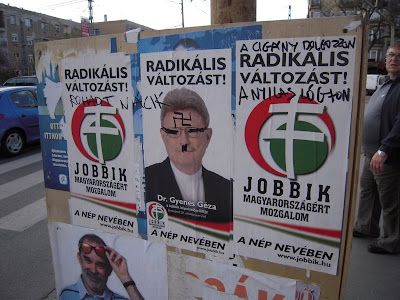 The Jobbik poster slogan is "Radical Change" which has been covered with the slogans "Rotten Nazis!" and "The Gypsies should work! The Arrow Cross should hang!" Note the Hitler moustache, a perennial favorite in any Hungarian election regardless of political viewpoint. No mincing words here! Another Jobbik poster in Zuglo also got the direct treatment: 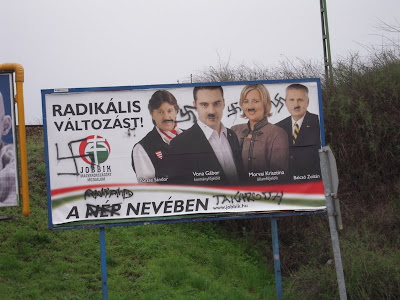 This was across the street from the defaced "Faggot/Jews/Lesbian" MDF poster, meaning the defacer of both was most likely a FIDESZ supporter. Jobbik has been using the old slogan"In the Name of the People" which was actually one of the old Stalinist era Communist slogans. Go figure. You live, you learn. Here the "people" has been replaced with "your mother." Again, the ever useful Hitler moustache makes an appearance but now it is used to deface the poster of a party that Hitler would most likely approve of. It looks especially fetching on Dr. Krisztina Morvai, a very outspoken Jobbik leader (although she is not even a member of the party) and EU Parliament representative. No, I do not like her. At all. And no I will not use this space to explain why, although I heartily urge those who enjoy carnival freak shows to google her name and learn more about her - youtube has some particularly good moments from her in English. The end. 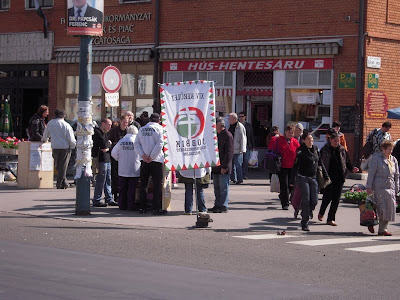 Here are Jobbik activists manning a soup line outside of the Bosnyak market in Zuglo on Saturday. As I was taking pictures a van pulled alongside of me, and one activist cheerfully offered me a handful of posters to me to put up. I gently declined and he sped off with a chirpy "Szebb jövő" - the greeting of the party which translates as "Better Future" but can also be heard as something less positive, depending on one's view. I always wondered what it must have felt like to be a Jew in East Europe in 1939. Now I know. 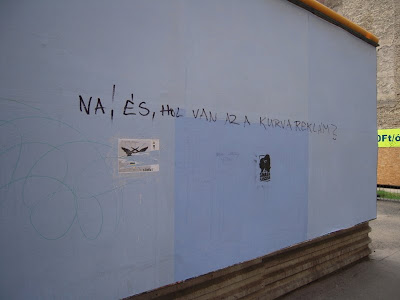 Now, this is Hungary which is a place where irony and sarcasm are taken to new heights. "So, OK, where the hell is the fucking advert" and another placard that has been seen all around Budapest that really sums up the way a lot of Hungarians feel about the choices in this particular election campaign: 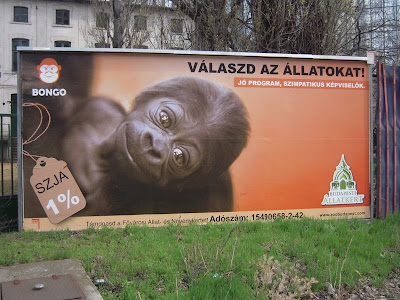 "Chose the Animals! Good programs! Friendly representatives!" An ad asking for tax donations to support the zoo. Think that this poster might escape the scrutinuy of the spray paint and magic marker brigades? This is it the next day: 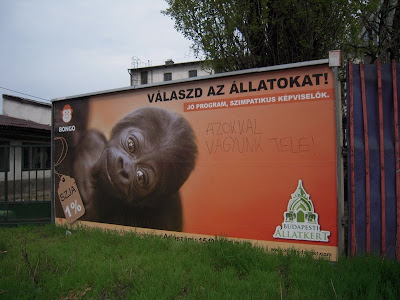 With the comment: "We're already full of those"
Posted by dumneazu at 9:55 AM

WOW, I was so amazed to read your post, very enlightening!

A few minutes ago I read who actually won the elections in Hungary. No surprise, I guess.

At the same time in a
"parallel universe" called Israel we're commemorating the Holocaust (memorial day)..

I'm living in Budapest on a Fulbright for five months. The election is a very interesting time to be getting to know Hungary.

I'd like to note the opinion of one Hungarian friend who is embarrassed by the success of Jobbik. For those who don't know, the socialists were also an embarrassment to the nation. After the 2006 election, in which they were returned to power, their leader said at a meeting of party officials that the party has lied morning, noon, and night to get reeelected and that the state of the nation was much worse than they had let on. These remarks were recorded and later revealed to the nation. Riots resulted.

The socialists were corrupt liars and admitted as much. So my friend feels that part of the support for Jobbik is revulsion for the socialists, a desire to repudiate them to the greatest degree. She feels that if FIDESZ governs well and responsibly, Jobbik will again fall below the 5% threshold for parliamentary seats.

Great summary. I live in the same district and mostly I've only seen MSZP billboards scrawled on despite the fact that the Fidesz billboards just cry out to be defaced. (not showing my bias, but the huge Orban head reminds me of the "gruff but loveable " imagery plastered all over dictatorships) I think Fidesz makes darn sure that they don't stay defaced for long and place a new one over.

Also I was here for the 2006 elections, and neither of the big 3 parties at that time were talking about some of the "lies" that the MSZP finance ministry got caught in by the bond financing industry a few months before. It showed that the gov't finances were covered up a lot of profligacy. Yet in the debates this topic wasn't even brought up, and Fidesz didn't bright it up and instead made some wild campaign promises.

Anonymous said...
This comment has been removed by a blog administrator.
10:44 PM

Penetrating post...I just moved to Hungary three months ago and, as a political junkie myself, have been trying to better understand Hungarian politics. Your post has helped a lot. I covet the photos of defaced campaign posters! I hope you don't mind if I post a link to your blog on mine. Cheers!

Penetrating post...I just moved to Hungary three months ago and, as a political junkie myself, have been trying to better understand Hungarian politics. Your post has helped a lot. I covet the photos of defaced campaign posters! I hope you don't mind if I post a link to your blog on mine. Cheers!