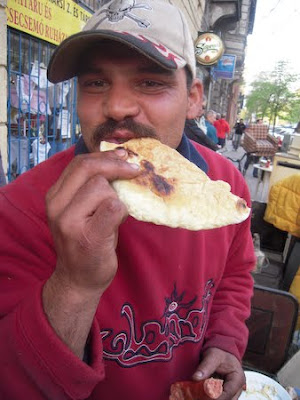 The surest sign that spring has arrive in Budapest is when the fresh piles of garbage appear on the streets: trash day! Each district in Budapest has a schedule for setting trash out for pickup. It used to be posted for all to see but the the Budapest city fathers, mothers, inlaws, and cousins, decided a few years ago to post a notice in the hallway of your flat a week before the day when the trucks. Why? To prevent trash picking. In particular, organized trash picking. So what is wrong with that? Isn’t trash picking simply a populist form of recycling? Well… this being Hungary, trash picking as a profession tends to be in the hands of Roma, or as we know them on trash day, Gypsies. And this weekend was trash day in the 7th District... an affluent area of Pest with a large Roma population and a virtual Treaure Island for trash picking! 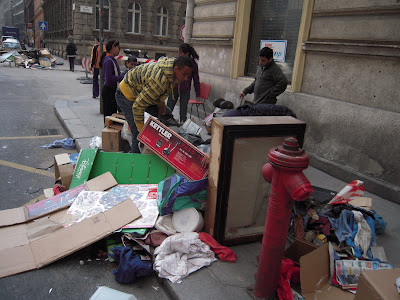 Now, I personally have no big problem with Gypsies picking my trash. I have actually set out old computers with handwritten menus about what caused me to toss them and how much they can handle. I have met Gypsies in torn and sweaty shirts who knew exactly what kind of hard drive was recyclable from which motherboard. But the city council doesn’t like the mess of having Gypsies on the streets picking through the trash, so they prefer not to tell us when trash day is coming until the last minute. Which means we slowly pile up our crap on the porch and hope for the best. In some years, I have been out of the country on trash day. Which means I have to live with a pile of trash for another year, or secretly sneak it into another district, not an easy task when you get around by bicycle. 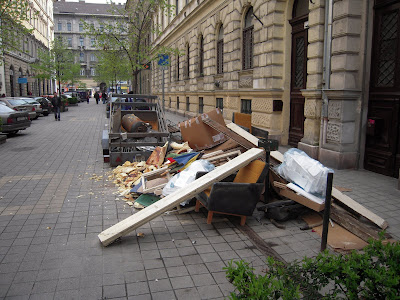 Personally, I can’t really understand the logic of this. Sure, the Gypsies picking through the trash and ripping out the backs of refrigerators on the street are a mess… but it is trash day, fer crying out loud! It is a Day of Mess. Gypsy families from all over Hungary wait for the day – and somehow they know when the secret trash days of each district will fall. Obviously somebody inside the city councils is letting the cat out of the bag. 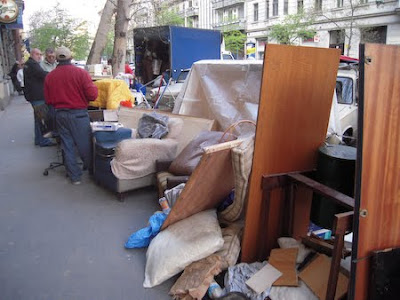 And the city councils don’t like this? An underemployed minority accused of not wanting to work… voluntarily doing backbreaking, environmentally friendly, fill-a-capitalist-market-niche work… and they don’t like seeing them work? Renting trucks on their own coin, waking up before dawn and working their Roma asses off in callous raising hard labor all day for the eventual small rewards of recycling the deritritus of our urban lives? They have a problem with this? 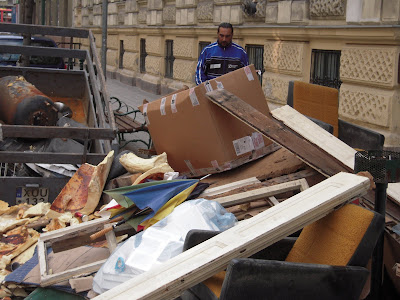 Of course, this is Hungary. People here have certain, err… territorial sense about them. They like to set personal borders and boundaries… My space! My territory! My turf! My stuff! And so you find people who have just come upon a pile of trash a few minutes before you suddenly claiming eminent domain on it. Families set out chairs and have Grandma defending the trash pile from all who would posses these priceless treasures. And then, suddenly, you come upon something amazing... something you really must (?) have... finally - and literally - the trash heap of history! 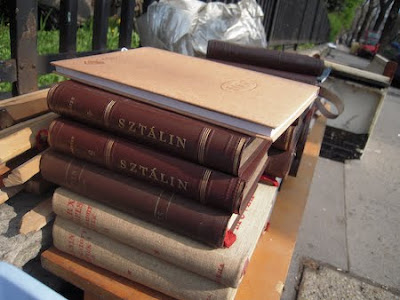 We came on this pile that included the collected works of Lenin and Stalin translated into Hungarian. I took some photos, but the family wanted me to buy the books. I’m not shopping, I said, so they barked “500 Forints for a photo!” Of somebody’s trashed Stalin books? How long have you owned them? 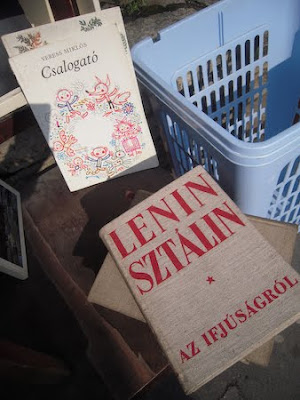 Trash picking is hungry work for country people making pennies who don't want to spend their money in urban restaurants. And so while biking around the 7th district we came on some out of town Roma having lunch. They were eating a kind of flat bread, the traditional Gypsy bread once common to most east European Roma and virtually unknown to non-Gypsy Hungarians called bokolyi. 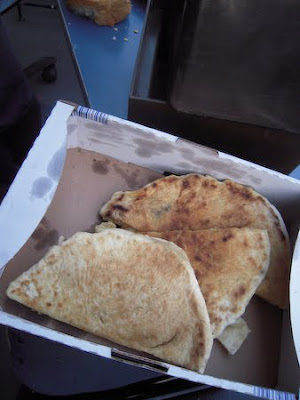 Basically, it is biscuit dough baked in a round, just as it used to be made in the ashes of a campfire. Essentially, this is bannock, the most primitive campfire bread you can make, the beloved lunch of Cree Indian trappers in Manitoba and Budapest trash pickers alike. The Gypsy trash pickers baked it at home to bring with them to either save money on food (bread? A buck a loaf?) or because it is considered to be more filling, more satisfying, and generally, more Romanes…more Gypsy. As the song (Gelem, Gelem) says Maladyilem bakhtale Romensa... I even met happy Gypsies. [thanks to Fumie for the Bokolyi pix!] 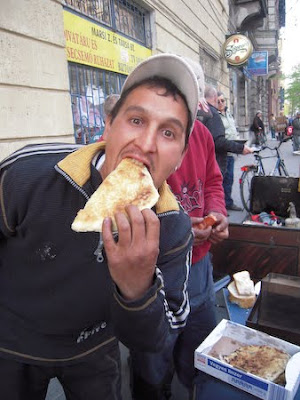 It's not just Gypsies trashpicking - half our furniture comes from VIIth district throw out days. No-one else was interested in the furniture - just the copper wire in the washing machines.
And you're right, it is appalling to see these shiftless souls working dawn to dusk - like those terrible people who go into the UK as illegal immigrants and work - can you believe it, the cheek - cleaning hospitals when no-one else will.

In my opinion the trash picking has it's different side too.
One: In Hungary you are supposed to be able to show proof that the product you're selling is not stolen. Trash picking does not feature in the law books...
Two: it's great that rubbish is being recycled and taken away and new homes are given to old furnitures but, if something is being taken away and then tossed on the side of the road because it couldn't be sold - is fly tipping. Fly tipping in forests, side of the roads - you name it. With this I have a problem.

Having said that I love that they provide free Trash Days in Hungary (to prevent fly tipping!)

and working their Roma asses...ez jo.

I'm a casting assistant on an American TV show called "House Hunters International." We are currently casting episodes of our program in Hungary and would like you to participate in our show!

Our show follows house hunters through their search for a home in countries around the world. Participating in our show is a lot of fun and a great way to document your exciting search for a home and new life abroad. In addition, you will receive compensation for your time and efforts. Contributors should be fluent in English, between the ages of 25-50, and have bought a home in the past 2 or so years.

If you are interested in participating with our show or learning more, please contact househunterscasting [at] leopardfilms.com.

Have a wonderful day.

The bread pictured here looks like the bread my family always said my great grandfather made. When the family asked for the recipe he would refuse to give it to him says it was a poor mans meal. we have been looking for the recipe ever since. would you know where i can find the recipe