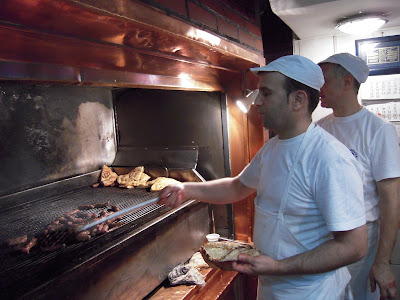 Certain foods have certain localities where almost everyone agrees that it does not get better than here. Pastrami? Katz's in New York. Sushi? Tsukuji fish market in Tokyo. Now I'm going to make a philosophically unsound and broad overstatement that many won't agree with - Sarajevo has the best ground meat product in the world: cevapi. Most people in the former Yugoslavia would probably agree - Bosnian cevap was something you wrote home about, and when I visited Macedonia in the 1980s everybody agreed that the Bosnian owned cevap houses were the best in town. There were documentaries on Yugoslav TV about Bosnian cevap. Even in Istanbul, Bosnian cevap houses do a brisk business in a city that probably serves more grilled meatwads per capita than any other supermetropolis in the world. 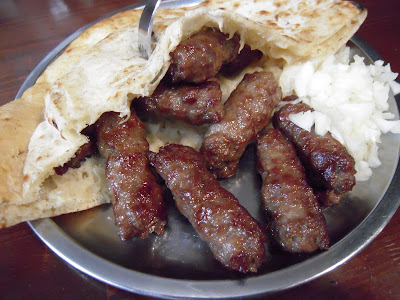 Yes, better than White Castle hamburgers, better than Cicek kofte in Istanbul, better than any cevapcici in Belgrade or kebache in Skopje. Nobody takes a ground up cow and grills it better than the Bosnians. I challenge even the hardiest hamburger partisan to eat Bosnian cevapi in the Bascarsija district and walk away thinking that In-and-Out burgers or Shake Shack can hold a candle to the simple perfection of a $3 Sarajevo cevap plate. The first thing we did when we set down our bags after arriving at 9pm was to make a beeline to Zeljo's. 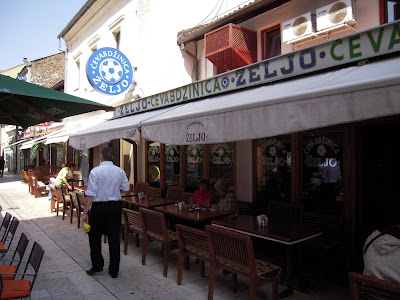 Zeljo's is, perhaps, the most famous of the Bascarsija's cevap houses - cevabdzinicas - and there are now at least two on the same street. Like most cevapdzinicas, the menu is spare and no beer is served, but you can order fresh sour buttermilk by the glass to wash down the meat, which is served in a spongey flat pocketed bread known as somun. Traditional sides are chopped fresh onion and kaymak, a thick and slightly cheesy cream ball that melts over the cevap. This is the classic Sarajevo cevap: a small cylinder of meat, a mere morsel of amino acids and proteins that was once a happy little animal and is now a masterpiece, a high point of world cuisine, the excelsior of the grilled arts. And also, it is my lunch. Mine! 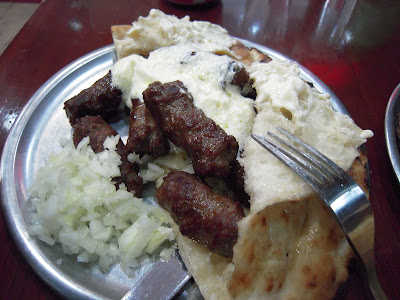 This is the Cheeseburger of the Gods, the ultimate in ground beef goodness on this little blue orb we call Earth. They are even easier to eat than a burger, and served inside a warmed somun bread they stay warm throughout the meal. You can eat the cevapi like a sandwich but most people tear up the somun and grab the cevap with the bread. This cevap was astoundingly good, and a bite of this flooded my brain with all kinds of dopamine "happy brain" chemicals - true meat crack. I would drag myself through the sewers of hell for another plate of these cevapi. For Sarajevo style cevap, Zeljo's definately took the "I Can Eat This Twice a Day Award", but we had to try a few other places as well... people who have tried cevap in this nabe can be sharply loyal to one cevap house or another, and while I definately stand in Zeljo's camp, Cevapdzinica Hodžić was also highly recommended. 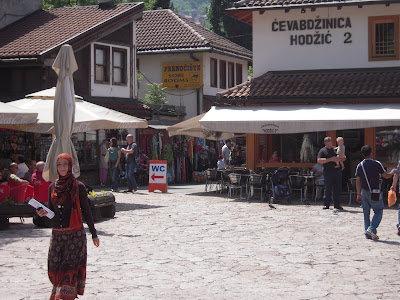 Hodžić is definately going for the upscale market: they were the most expensive cevapi in the quarter, and they seem to have opened a new franchise on about every block in the Old City... there is Hodžić One, Hodžić Two, and so on. Still, it is hard to be too upscale with grilled meat... nothing on the menuis over 5 EU (the Bosnian mark is 2 BM to 1 EU) and you can get grilled veal kidneys and liver... I was tempted to try the pleskavica, but heck... stick to the classic shapes. 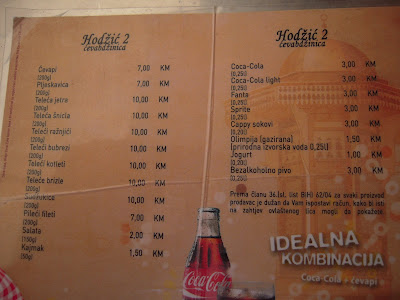 The verdict? Good. Very good. Better than 99% of all the world's cevapcici, but not as good as Zeljo's. Slightly saltier. Slightly more charcoal flavor in the bread. And a truly excellent Coca Cola. I know... I know... globalization goes better with coke... but I only drink about five cokes a year. I really love Coke and I know they would kill me if I drank more, so whenever I actually drink one it is a memorable event, and it paired so well with the saltier Hodžić cevapi. Truly an idealna kombinacija! 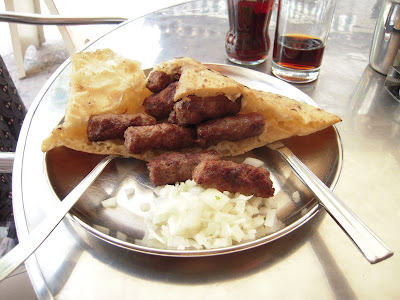 Later we ate at the Cevapdzinica #Nine, right next door to our accomodations (the clean, friendly and shockingly cheap Kod Kome Guest House.) For some reason, Sarajevans seem to name their meatwad bistros after cardinal numbers, usually involving a soccer ball in the logo, which gives me the impression that opening a cevapdzinica is something you do when you retire from football. If you are Irish or Hungarian, you open a pub, but Bosnian ex-strikers go for grilled meat. 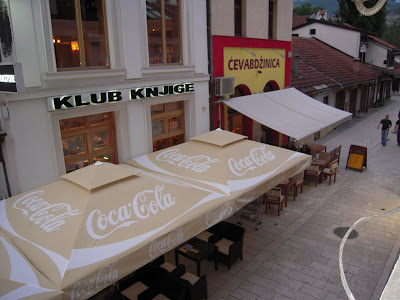 This is your usual no-big-deal Sarajevo cevap house, meaning it is only better than 98% of the cevap houses in the entire world. And they served salad! What a treat. For several days we had not seen anybody eating anything that resembled a vegetable (and face it, onions don't really resemble a vegetable.) Noting the interesting long term effects of an entirely fiber-free diet on our digestive systems, we went for the salad. Glad we did. 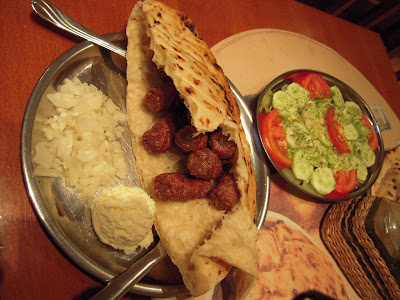 So what did we do when we weren't eating cevap? We ate burek (another post) or Banja Luka style cevap (yet another future post: the serious issue of a competing cevap style is too complex to include in a single post.) We also walked around not buying any souvenirs. I have managed to live from day to day for decades without really needing a copper Turkish coffee pot or a small flintlock musket to defend myself from miniature Albanian sheep raiders. I could, however, hear the sad, beseeching voices of the rugs, pleading "Buy me! Buy me! Pleasse! Take me home with you!" With a stone heart, I ignored them and walked on. 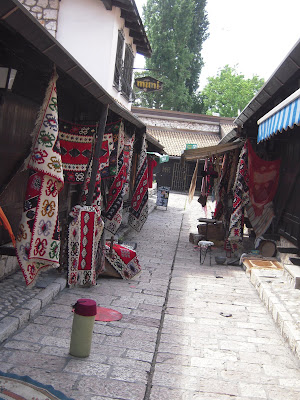 Yes, I like rugs, but for the price of one rug I can eat about 125 plates of cevapi, so there really wasn't any contest there. Fumie, however, fell in love with a pyjama set in a shop window, and passed on it when it turned out to be the same price as 13 servings of cevap. Disturbo? Disturbo! 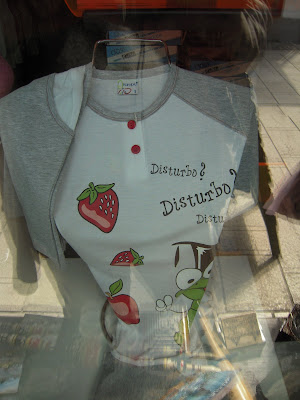 (Coming soon: The Banja Luka style Cevap!)
Posted by dumneazu at 2:57 AM

I would drag myself through the sewers of hell for another plate of these cevapi.
Well, thats a statement, for sure.

Making my first batch right now. I'm an armchair traveler, but now Sarajevo is my dream.

蔥爆牛肉Vivian said...
This comment has been removed by a blog administrator.
9:00 PM

Anna said...
This comment has been removed by the author.
2:56 PM

If you knew what that meant about hell you certainly wouldn't say it. It's not that hard to make cevapis. If you can make your own hamburgers you can make this. Plenty of garlic and seasonings, leave it overnight, and grill.

"Nobody takes a ground up cow and grills it better than the Bosnians."

Can't wait to visit bosnia again ...you whet my appetite. ;)