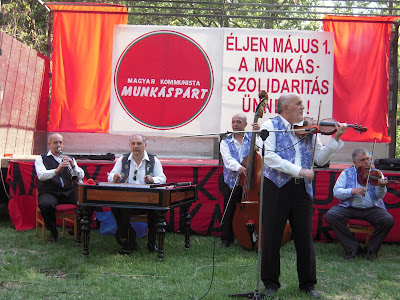 Does anyone out there remember The Worker? Before there was the Venture Capitalist, the Systems Manager, the E-Business Consultant, and the Human Resources Rep, there was a guy in overhauls and a flat cap who used to carry a tool box and produce useful things in factories and dream that one day, Uncle Karl's dream would come true and the Last Capitalist would finally sell himself enough rope and... well, yeah. The Worker, a dying breed. Well, May 1 is his day.After 1989, people in East Europe never really gave up on May Day, since they never got around to thinking that they were not workers, but merely consumers, as befits the modern world. And so the May Day celebrations continue, albeit without the neat parade of Soviet tanks, in the Budapest city park. Amid the beer tents and the t-shirt sellers and the incredibly bad Hungarian pop-rap music, the old school Hammer and Sickle crowd still pitch their tents over by the Vajda Hunyad castle in the City park, and enjoy an old fashioned csardas care of the Hungarian Communist Worker's party. As with most Hungarian holidays, there is a lot of bad grilled food and beer, especially since Hungarian May Day traditionally meant "free hot dogs and beer in the park." Things have gotten a bit better, though. How about some radically red food? 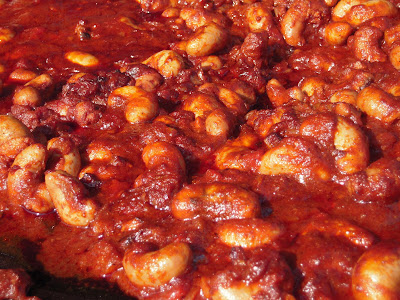 No, that is not bean stew. Not by a long shot. Kakas here pörkölt is rooster ball stew. Yes, the rooster's family jewels are rudely removed and stewed in a thick paprika sauce and served with a snicker and a thick slice of bread. (Fumie asks: "But where do they come from?" From inside the rooster, darling...) It is not a commonly served dish, but given the amount of chickens eaten in Hungary, there are obviously enough roosters singing soprano to produce an awful lot of these cashew-sized chicken testicles. I am strongly inclined to believe that the value of the dish is in the public eating, as in "Ewww... look what daddy's eating! Wanna try one? Go ahead.... just one...." 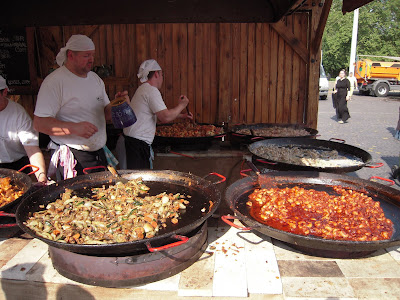 Just to give a sense of the scale of culinary poultry castration, these stews are served up in humongous portions. I don't really get the point of the rooster ball stew... it is not considered an aphrodisiaic, and most Hungarian men don't really need any help in that department at all, at least not from something also known as a cock. I didn't try this particular batch, but I have eaten battered fried rooster balls on occaision, and they were... well... ballsy. I'm not an expert about what cock balls are supposed to taste like, although I have no problem with anyone who perhaps is. 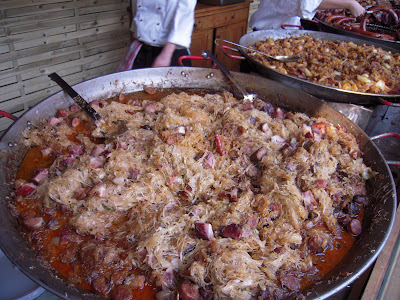 Slightly more like normal Hungarian Sunday fare is székely pörkölt pork and sour cabbage stewed in paprika. Contrary to what you might read in a dozen or so Hungarian cookbooks, it has absolutely nothing to do with the Transylvanian Székely people, but is named after a certain 19th century Budapest librarian named Székely who liked to have the chef stir sauerkraut into his afternoon stew. And thus we get Red Sauerkraut, the stew of the Working Masses on May 1st. Which reminds me that it is only two years ago that Fumie and I accidentally found ourselves in downtown Kiev on the morning of May 1, and got to witness May Day the way the Old School Hammer and Sickle Posse likes to roll it.And remember, "If Marx were living today, he'd be rolling around in his grave... because Karl, the world isn't fair...
Posted by dumneazu at 7:10 AM

Woah, that's a great song, I'd never heard it before!

Mr Dumneazu, I'm still living in Cluj and on 23rd of this month (May) will be going to a nearby village called Mera for their annual village party. Am I right in remembering that that was where you had violin training? If so, can you remind me please what was the name of your teacher - Arpi bacsi? Feri bacsi? - and if you went to one of those parties can you tell me what we might expect and between what hours? Thanks!

Well, i like Your blog.Or should i write in Engrish too?